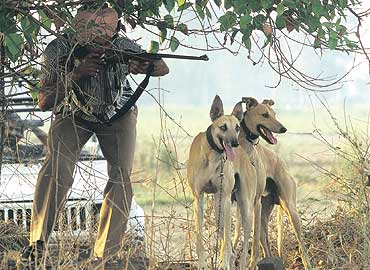 outlookindia.com
-0001-11-30T00:00:00+0553
Take a ramble around villages of the Shivalik foothills or the 'Mand' areas near the Beas river in Punjab and chances are that you might run into a wire wound on a wheel, at the other end of which is a dummy hare which is being used to train greyhounds for hunting and racing. Forget for a while the stray Pataudi or Salman Khan who hit the headlines because of their star status. Here in Punjab, the sport of hunting with the hounds, which was once the preserve of royalty, is today the hip thing to do in village after village for all kinds of people, right from the humble farmer to a retired police constable or even the village grocer.

One does not need a rifle for this and the hounds fulfil the dual purpose of being used for track races in rural games. So, if the bigger landlords import the highly prized pedigreed hounds at prices ranging from Rs 2 lakh to as much as Rs 25 lakh each, the smaller ones make do with inferior varieties. Says Sukhdeep Bajwa, an honourary wildlife warden: "Though people who own hounds generally say that they are breeding them for dog races, actually they are commonly used for hunting. In fact, the training of greyhounds for races is generally done with the help of live hares."

Shikaris reveal that along with the hounds they take flusher dogs like pointers or spaniels which first flush out the hare from the bushes. Once the hare breaks cover and starts running, the hounds are let loose to chase and kill it. Bajwa has apprehended at least five groups hunting with dogs in the last one year or so in Gurdaspur district alone. The bull terrier is also commonly used to hunt wild boar in the Punjab countryside. It's therefore very common to find greyhounds or other good hunting breeds of dogs being reared in villages and equally common to find them chasing wild boar or hare accompanied by a group of enthusiasts.

Says Nazeer, an old shikari turned conservationist: "In the rural areas, this is a good source of entertainment when farmers don't have much to do in the fields. Besides the thrill of a good chase with their dogs, the attraction of getting some good meat to wind up the day is a bonus." Wildlife activists say that it is the hundreds of greyhound enthusiasts, who go on hunts almost on a daily basis, who are responsible for dwindling numbers of wild boar and hare in the Punjab countryside.