It is the same story at both hotels. "The guest is first, the company second; we stand the last." 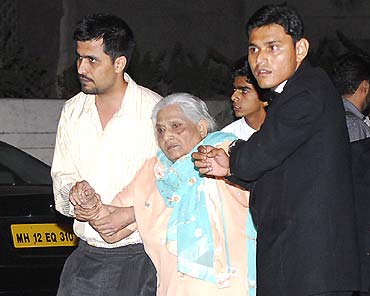 outlookindia.com
-0001-11-30T00:00:00+0553
When he first heard the gunshots, Kandahar's manager, who requested not to be named, ran outside and saw two armed men heading towards this Oberoi restaurant. Rushing back in, he bent down to deadlock the restaurant doors with the help of the hostess on duty. "Next thing, I looked up, they were right there, guns raised," he says. "These were no ordinary guns. With one bullet, our door came down."

As the glass shattered, the manager herded guests together, leading them down a service corridor with his barman at the tail of the group. The hostess had taken a bullet hit to the arm and was bleeding profusely. Tying her arm tightly with a napkin, the manager asked another staffer to escort her out and ushered 40 guests outside to safety. They've been calling him ever since: "Because of you, we're alive," they say.

It is the same story at both hotels: of housemen running ahead of gunfire to disperse people; of stewards securing restaurant doors under a steady stream of bullets; of waiters feeding guests even as they waited it out in darkness; of hostesses ushering terrified guests down service corridors, to safety.

Staffers at Mumbai's top two hotels stared down bullets to put their guests before themselves-sometimes at anguishing personal cost. The Taj general manager Karambir Kang lived up to his name: 'karambir' or 'doer of brave deeds'. While Kang was directing hotel guests to safety, his wife Neeti and children died in their sixth-floor suite. Even in the face of such personal tragedy, Kang stayed on the job, very much the captain of his ship. Head chef Hemant Oberoi also led by example that day, risking life and limb to give the word "hospitality" new meaning. "He took us to his office in the staff kitchen to hide, and then sent us ahead to the Chambers with one of his chefs. When we looked scared, he told us, 'Don't worry. I'll take the bullet before you'," recalls Reshma Puri. The chef who escorted them died, the Puris survived.

Kandahar's restaurant manager sums it up with typical modesty: "The guest is first, the company second; we stand the last."