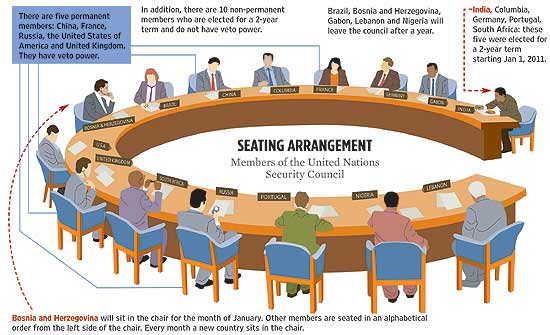 As 2010 segued into 2011 and the world set out to start a new decade, a self-conscious India found itself in the green room, going over the lines of its promised role as a major global power. It’s a dress rehearsal unlike any—India can’t fumble and bumble, it has to say its line with the certitude of a veteran player, neither unduly concerned about plaudits nor criticism. This was the thought among the foreign policy mandarins in New Delhi as India, on January 1, took one of the 15 seats at the famous horseshoe table of the United Nations Security Council, where all important decisions relevant to the international community are taken.

Around the horseshoe table will sit 14 other countries, with some, to use the Orwellian phrase, more equal than others. There will be the P-5 countries—China, Russia, France, the United States and the United Kingdom—which enjoy the power to veto any resolution. The remaining 10 are the non-permanent members, chosen for two years and empowered to participate in discussions and even vote but deprived of the right to stall a majority decision. Could this really be the stage for the fancied dress rehearsal where the other actors include poverty-stricken Gabon and strife-torn Lebanon and Nigeria? Is a cameo being mistaken for a lead role?

In diplomacy, as in theatre, actors bring their own skills, their own history and aspirations. It’s against these benchmarks that each player is judged, even those assigned bit roles. For some years now, India has been campaigning for a restructured and expanded UNSC in which it should have a permanent seat. Its quest won the endorsement of all P-5 leaders barring China; US president Barack Obama even went to the extent of hailing India as an already emerged power. More importantly, it bagged 187 of the 190 votes to get elected as a non-permanent member. These 187 countries will be the audience, the judge, whom India will have to impress through its ability to act on the world proscenium.

The problem, however, is that this audience is a disparate medley of developed and developing nations, each with its own varying demands and needs. This befuddling mix poses challenges India hasn’t really encountered in recent years. Says an Indian diplomat, “We have to be the voice of the developing world but we will also have to work constructively with the P-5 members.” Adds former foreign secretary Kanwal Sibal, “It’s an ideal opportunity for India to mark its rising profile in the world. But India will have to strike a balance between the two (the developing and developed world) particularly as the US and its western allies have already put India on the notice.”
Being “on the notice” will mean that western powers will closely watch India’s stand on various issues, its voting patterns on crises discussed in the UNSC. It will be India’s litmus test; what it does will not only influence its bilateral relations with major powers but also determine the kind of support they’ll provide for India’s candidature in a reformed UNSC. Simultaneously, though, India can’t displease many of its traditional allies in Asia and Africa, all jacketed in the category of the developing world, for each of these votes will become relevant at the time when India seeks a permanent seat in the UNSC.

In a way, a UNSC role isn’t new to India: it has been a non-permanent member six times, the last in 1991. But the world has become increasingly complicated over the last 19 years. The first issue to test India’s mettle will surface this month—on an extension to the UN Mission in Nepal (UNMIN). Established in 2007, UNMIN was to supervise the disarming of the Maoist rebels and ensure a smooth transition from monarchy to democracy. India is opposed to granting an extension to UNMIN, convinced that it has failed to disarm the rebels and isn’t expected to achieve this goal anytime soon. New Delhi also feels UNMIN has encouraged some western countries to interfere and complicate the internal process there. It’s to be seen whether other UNSC members will accept India’s position.

There will be issues pertaining to Africa, a region where India claims to have vital interests and commands influence. For one, a division of Sudan into its southern and northern parts is due through a referendum soon. Then will come the tricky issue of the Ivory Coast; its president isn’t willing to relinquish power even though he has lost the election. India will also want the UNSC to take effective steps to check piracy from spreading from the Gulf of Aden to Indian waters, a consequence of the chronic instability plaguing Somalia.

“Ask not what India gets from UNSC, ask what UNSC gets from us. It needs India on every single global issue.”
Hardeep Puri, Permanent Member of India at the UN

India’s bigger challenges will be to fashion its stance on the controversial Iranian nuclear programme and on issues pertaining to West Asia, particularly the Palestine-Israel imbroglio. Says former foreign minister K. Natwar Singh, “India should not come under pressure from any country and must take a stand to support its traditional allies.” But his prescription won’t be easy to follow should major powers want to impose a fresh, harsher round of sanctions on Iran, which partially quenches India’s thirst for energy. Similarly, will India support Palestine to the extent that it alienates the US and Israel? Also, can India dissuade the US and its allies from coming down hard on the junta in Myanmar with the argument that persuasion has already yielded results there—Aung San Suu Kyi has been released and a general election conducted?

These worrying questions, though, don’t daunt Hardeep Puri, permanent member of India at the UN. He told Outlook, “Instead of asking what India gets from the UN Security Council, let me turn the question around and ask, what does the Security Council get from India? There is not a single global issue on which it doesn’t need India’s help.” True, India isn’t the India of 1991—it’s now the world’s fourth-largest economy, has the third-biggest army that has contributed significantly to UN peacekeeping operations, and its democracy, for all its flaws, is not only the largest but continues to be vibrant and inclusive. And though India won’t have the veto, it can combine with other non-permanent members like Germany, Brazil and South Africa, all major powers, to demonstrate their collective ability to handle various crises. Says Puri, “We will work in the council to make it more efficient and give it more legitimacy and credibility.”

Puri’s confidence is reassuring for the dress rehearsal that could firm up the notion of India’s primacy in the world, particularly as the ‘UNSC play’ has no set script, and positions and lines will have to be thought of and articulated as crises and contentious issues surface over the next two years. As Natwar Singh says, “Crises are not made to order, they erupt on you on short notice.”