The India Story had lured small investors at last. The May 22 crash ended the adventure. 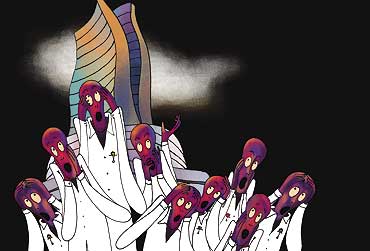 outlookindia.com
-0001-11-30T00:00:00+0553
One could sense the fear among small investors the day one watched the phone-in programme, Vyapar Is Hafte, aired on Doordarshan, on Sunday, May 21. Many callers had been hit by losses—notional or real—after the nearly 1300 points drop in the Sensex in the two previous trading sessions (May 18 and 19). Each one of them wanted to know whether they should sell, whether they should hold, and was this the beginning of the end of the three-year-old bull run. The panic seemed widespread as there were 20 calls in 30 minutes. Many more were apparently waiting in the queue when the programme got over.

This mindset translated into frenetic selling when the markets opened on Black Monday (May 22). In 115 minutes, the Sensex slithered down 1100 points and trading had to be suspended for an hour. From then on, one saw and read the obvious stories on TV channels and newspapers. Raju Desai, a 35-year-old diamond trader, was battling for his life as he tried to commit suicide by consuming acid after the crash. The buzz in trade circles is he sold diamonds worth a few crores to get into the market. As he invested at the Sensex's peak, he suffered huge losses.

Another Mumbai-based industrialist, who has been investing in the market for over three decades, lost several crores in the week of May 17. In Ahmedabad, where speculators are in abundance and who bet on anything and everything, policemen were posted at so-called suicide points to prevent any incidents. Going by what the experts and analysts were saying on TV channels, it seemed the fall had created a huge crisis of confidence among genuine small investors, traders, operators and speculators. There was either a payments problem, or an inability to absorb losses, or a feeling that the markets were in for a crash.

Admits P.N. Vijay, an analyst, "The day-traders, arbitrageurs and retail investors, who form an important element of the market, have been the worst hit. It'll take time for them to gain confidence again." Agrees Dhirendra Kumar, CEO, Value Research, "Retail investors, especially those who came into the market late, will stay away for some time." Concludes Viral Joshi of the Mumbai-based Network Securities, "There is an all-pervading gloom and a mood of paranoia. The phones across our 100 branches haven't stopped ringing and we have witnessed a few gatecrashes by anxious investors, who lost everything they made in the boom last year."

He's probably right. Prakash Agarwal, 46, a Delhi-based marketing consultant, invested a sizeable chunk of his vrs proceeds in stocks last year. A part of his portfolio comprised Hindalco and Sterlite, two of the biggest metals players in the country. When the global metals meltdown (May 17) impacted the stockmarket in India, and unable to cope with the rising uncertainities in the commodity space, he sold the two stocks on that Black Monday (May 22). "Sterlite was particularly painful as I had purchased a large lot at Rs 120 per share, and sold it only when the price had slumped to Rs 74," he reveals.

Scores of other small investors across the country find themselves in a similar predicament. Many took a loss of at least 50 per cent of their portfolio value on three days—Thursday (May 18), Friday (May 19) and Monday (May 22). A Delhi-based government employee invested Rs 4 lakh, part of the savings for his 21-year-old daughter's marriage, on the advice of his friend and colleague. He took a heavy loss on his investments in construction and pharma companies—like his colleague—and has not even told his family about it. "Now, I will only go through the mutual funds route, which is much safer," he says.

However, there were some who managed to think a bit clearly despite the mania that gripped the market on those three trading days, when the Sensex lost over 1600 points in a flash. G. Ranjita, who works for a leading software firm in Mumbai, was attracted to equities in January this year, thanks to the 'India Story' she was hearing everywhere. She decided to put her annual bonus and a large chunk of her savings, amounting to nearly Rs 3 lakh, into stocks. Post Black Monday, the value of her investments had slumped by over 50 per cent. "Looking at the way the markets crashed, I was tempted to book losses. But then the losses would have been huge, so I decided to hold on," she says. However, she's sure she won't invest any further in stocks. "Maybe I'd look to exit the market with manageable losses in the next six months, when hopefully the Sensex would've witnessed some recovery," she adds.

There were others who seemed to have learnt their lessons from the crash of 2004. Devang Negandhi, another 30-year-old IT executive in Mumbai, says the events of May 17, 2004, flashed in front of his eyes. Then, his expensive investments in psu ipos were under the threat of being wiped off, but he held on. "Things got better soon. Even this time around although the notional value of my investments is down by more than 20 per cent, I looked at it as a good buying opportunity," he says. He says that on Black Monday, several stocks were available at ridiculous valuations. "NTPC was at Rs 96, and ITC at Rs 153. Such blue chips could never have come this cheap." So, despite his losses he invested another Rs 20,000 in equities. 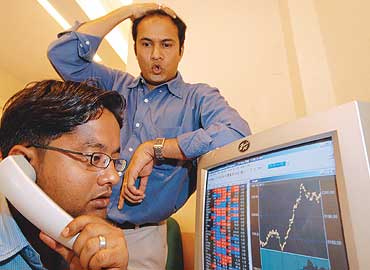 It was the speculative day-traders (who play stocks on a daily basis) and small operators who lost the most. Explains Motilal Oswal, chief MD, Motilal Oswal Securities, "It's the traders' greed and fear that led to the current panic. The average trader (operator) is not evolved enough to weather extreme conditions, both in terms of personality and access to cash." And that forced them to sell frantically like there was no tomorrow. Adds Joshi, "Traders must realise that rear-view driving is passe in today's market. Just because a particular stock has done well in the recent past doesn't guarantee it'll continue to do so in the future."

Sandeep Waghle, chief technical analyst, Angel Broking Services, sums it up succinctly: "After last year's bull run, winning had become a habit with common investors. It made them careless, reckless and cowboyish in attitude. They thought any stock they touched would turn to gold. So, when there was an initial fall in metal stocks (due to fall in global metals prices), there was complete disbelief. They held on, even purchased more shares, thinking this was temporary correction. Not expecting the subsequent wealth erosion that took place over the next few days, they were forced to sell at bottom-of-the-barrel prices on Black Monday."