Homes Of Kashmiri Pandits Abandoned Decades Ago, But Not Left Untouched 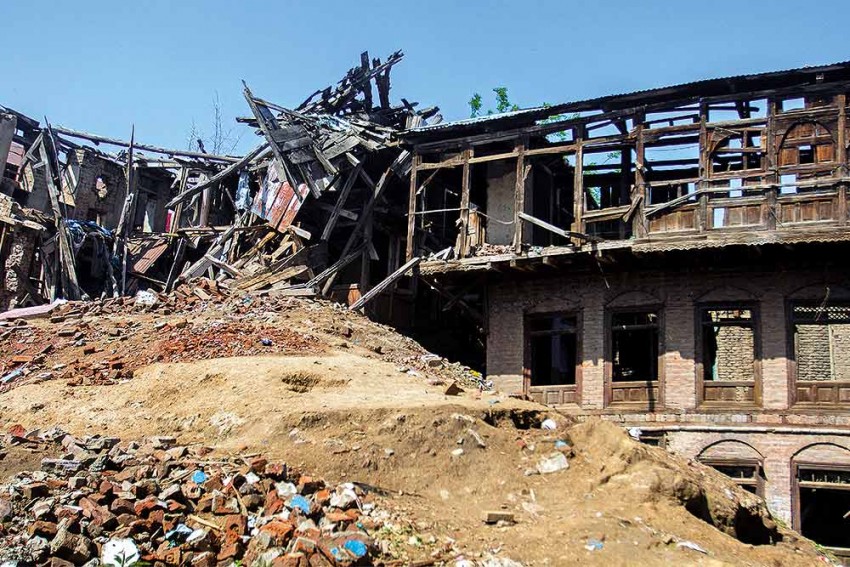 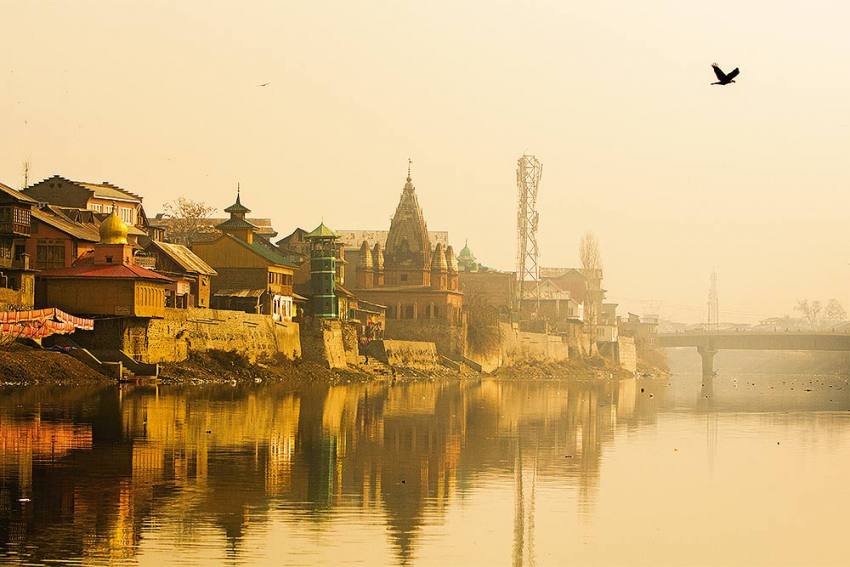 Temples along the Jhelum
Photograph by Javeed Shah 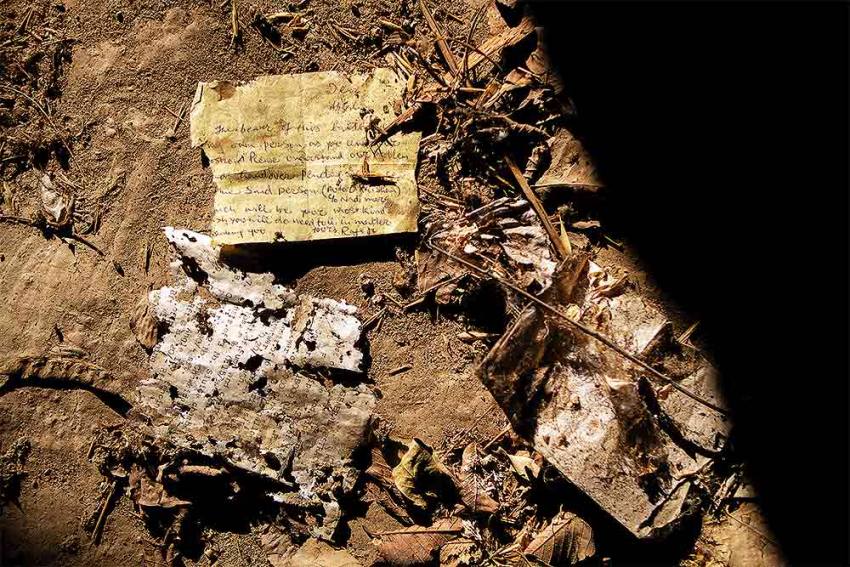 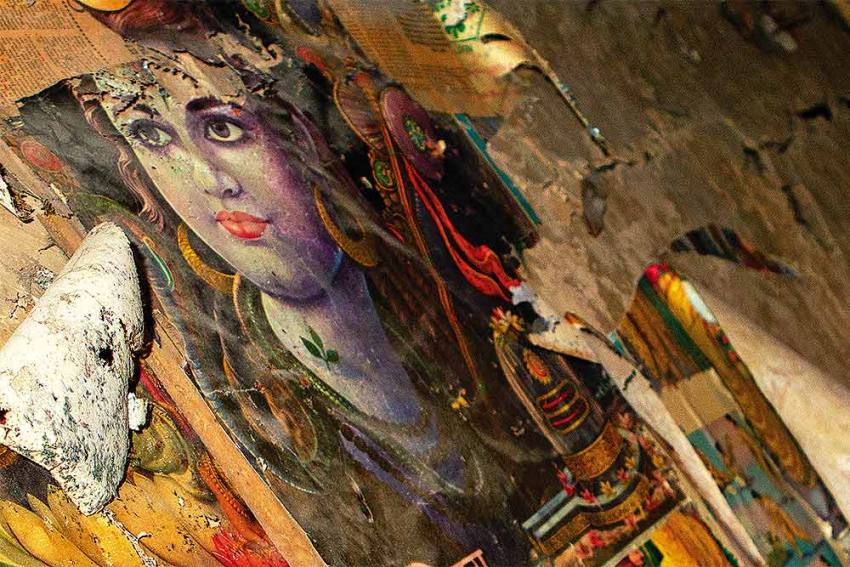 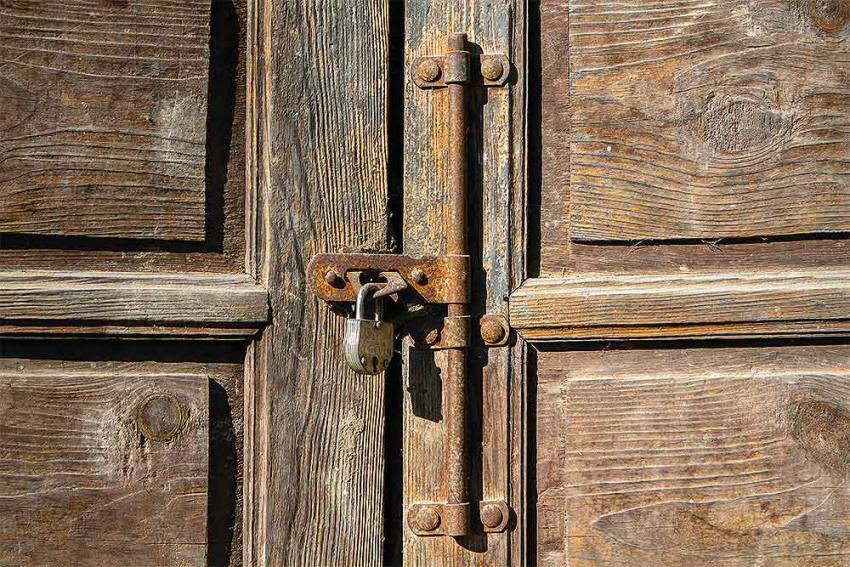 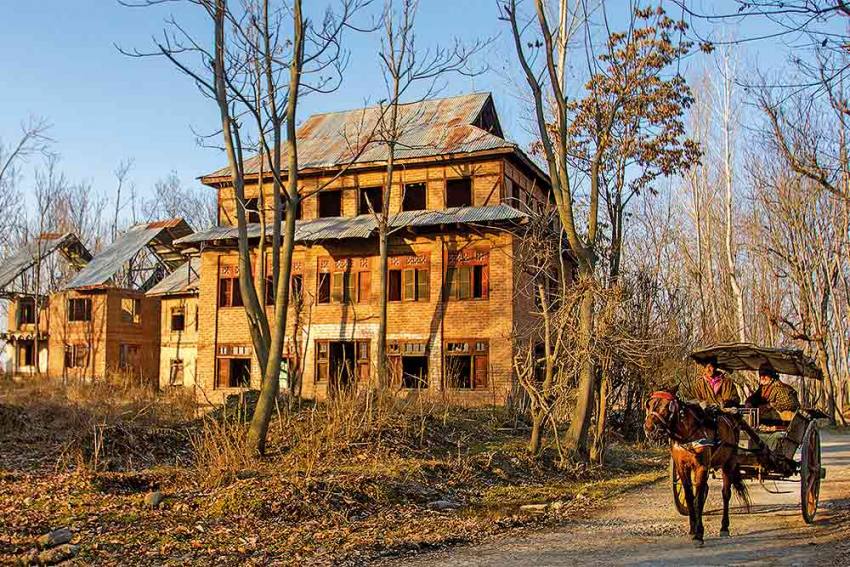 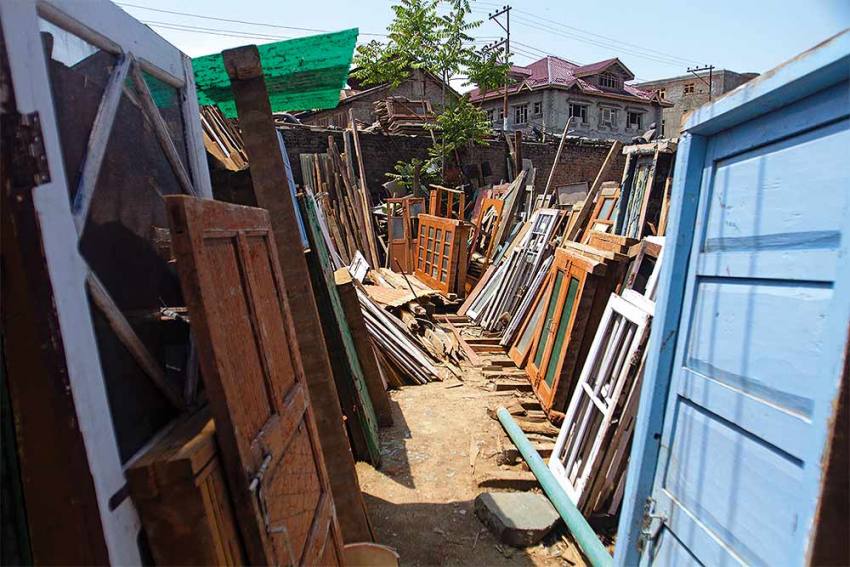 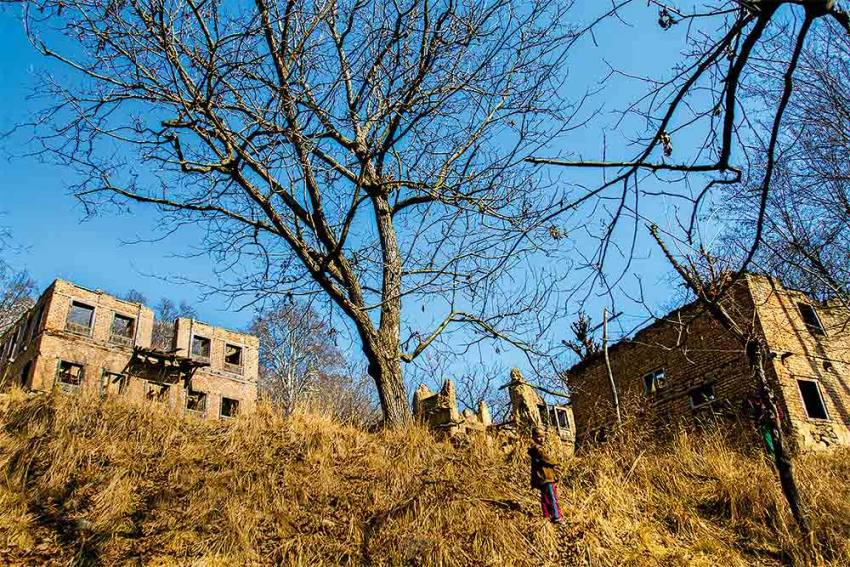 Wandhama where 23 people were killed in January 1998.
Photograph by Javeed Shah 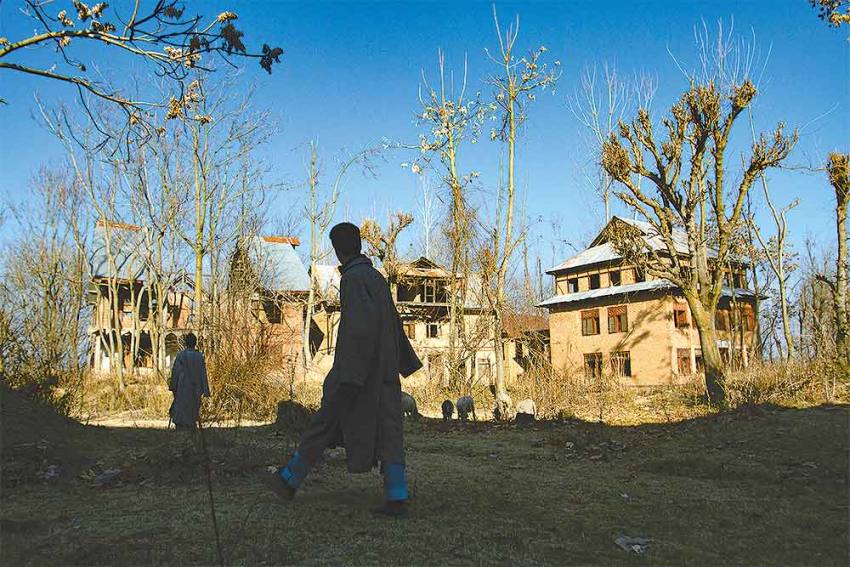 Nadimarg in south Kashmir. Only shepherds venture into this hamlet where 24 Pandits were killed in March 2003.
Photograph by Javeed Shah
Javeed Shah September 20, 2018 00:00 IST Homes Of Kashmiri Pandits Abandoned Decades Ago, But Not Left Untouched 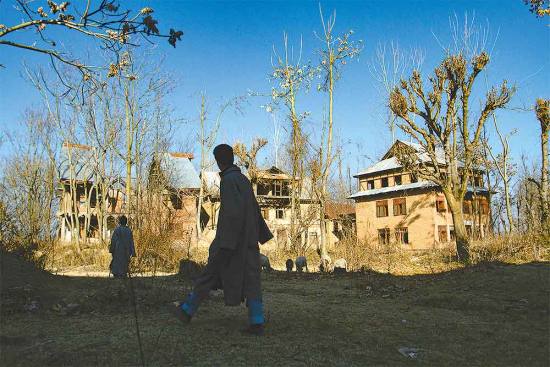 Old windows, doors and ornately-carved balusters… Impressive pieces of woodwork and secondhand building material await bargain hunters on the lookout for cutthroat deals at a new bazaar in Srinagar’s Baba Dem. The source of these stuff are pockets of empty, forlorn and decaying buildings dotting Kashmir—the homes of Kashmiri Pandits abandoned decades ago but not left untouched.

The vacant houses and overgrown lots stick out like sets from a zombie movie. These are glaring reminders of the mass exodus and massacre of Pandits that followed the peak of insurgency in the 1990s; and visible ramifications of the storm on the landscape.

A new market has sprung up in Srinagar’s Baba Dem, selling woodwork yanked out of abandoned homes

Before militancy engulfed the Valley, there were 77,254 Pandit families living in 1,242 locations in 1989. What’s left today of the once thriving community are 808 families in 242 towns and villages across the restive state. “When loudspeakers at local mosques began to blare out slogans against Pandits and India, we knew it was time to leave,” says Ram Krishan Dhar, 59. Even Muslim neighbours they have lived together for generations were scared and not in a position, or mood, to help. But not everyone. Mrs Dhar agrees. ”My husband reminds me that less than 0.5 per cent (Kashmiri Muslims) is disrespectful. The rest are friendly and show a lot of respect.”

Shabir (not his real name) recalls how he helped his Hindu brethren during those terrible times. He vividly remembers the day two militants approached him, asking about his Pandit neighbour. Why? The man must be killed, they said. But the man is a good neighbour, a gentleman, Shabir thought of telling them. He couldn’t; he was afraid. He would be a traitor if he didn’t “cooperate”. The militants brusquely ordered him to stop the Pandit next morning when he leaves for office in his car. Ask for a lift or something and “we will do our job”, they instructed. Shabir nodded and ran to his mother, who beat her chest (a typical Kashmiri way of expressing deep grief) as she listened to her petrified son narrating the imminent danger. Without a word she left for the neighbour’s home and warned them. The Pandit and his family escaped to Jammu that night. His Muslim colleagues helped him flee.

Read | Valley Of No Return: Kashmiri Pandits Have Little To Hope For

They left, as did Shabir. His family feared that the militants will now come after him. He was sent to relatives in another locality, where he stayed a month and thereafter moved to Varanasi. The self-exiled man now visits his parents every year with his wife and kids. “It happened almost 28 years ago, but haunts me always,” he says.

Nearly 90 per cent of the vacant Pandit homes were sold off to Muslim families. Some remains but not left untouched.

Such stories echo throughout the Valley, as do the ghost village of Nadimarg in Pulwama district of south Kashmir, where 24 Pandits were massacred in 2003. But Javaid Zargar, a former militant with the Jammu Kashmir Liberation Front (JKLF), says Pandits were not their target and never wanted the community to leave Kashmir. “It happens; miscreants took over. In the chaos, no one knew how to react. People were scared and some miscreants shouted anti-Pandit slogans. What happened was a combination of poor communication, government conspiracy, personal gains, rivalry…” He blames then governor Jagmohan and the government that “wanted to give a communal colour to our movement. Yes, some Pandits were killed for being informants, so were Muslims. Many of the killings happened because of personal rivalries, as it happens in other places.”

Decades on, nearly 90 per cent of the Pandit houses were taken—repaired and sold on the cheap to Muslim families. Rahim Dar is among the new owners. He bought one at Chanapora for what he says at a throwaway price of Rs 2.5 lakh. ”I would have had to pay Rs 8 lakh if it belonged to a Muslim family,” he says. The business of blighted properties boomed so much so that many like Gulam Mohammad, a shopkeeper in Chanapora until 1989, became wealthy property dealers, striking deals with Pandit house owners living elsewhere. “It’s a traumatic experience. But if I didn’t do it, someone else would have…and not as honestly,” philosophises the man who had sold more than 50 such homes.

Read| Kashmir Roundtable: A Solution Is Not Impossible When People Talk

Text and photographs by Javeed Shah

Obsessed With Selfies And Afraid Of Body-Shaming, Teenagers Are Turning To Cosmetic Surgery