Homecoming For The Queen Bee?

Jayalalitha plays the Hindu card to realign the state BJP with her. Meanwhile, a weakened DMK treads gingerly in the waters. 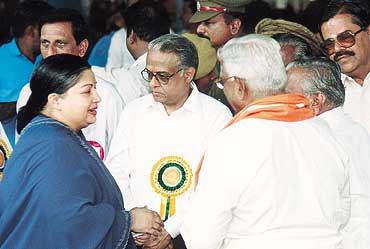 outlookindia.com
-0001-11-30T00:00:00+0553
You can choose your friends, but not your relations, someone once said. But in Tamil Nadu, it looks like the DMK can choose neither. So if the AIADMK’s Jayalalitha relates more strongly to the BJP ideology (more than the BJP itself does publicly), it is but natural that the two have a kindred feeling. In fact, the state BJP seems to have greater regard for Jayalalitha than it has for the hamstrung Vajpayee government at the Centre. The result: formal alliance partner of the BJP, the DMK, looks all set to become former partner. But sources say an official severing of ties is likely to take some time.

For now, DMK chief M. Karunanidhi is showing qualified restraint. He did chastise the BJP state unit and declare that the DMK cannot have any truck with it at the state level, describing the signals sent out by it to Jayalalitha as unhealthy. However, he was quick to add that equations in New Delhi had not changed and that the DMK was very much with the NDA. Party MPs admit nevertheless that Karunanidhi is just hanging in, and that he will have to quit the government at the Centre should the AIADMK be accommodated in the NDA. That’s not surprising because since the AIADMK’s impressive showing in the assembly polls last year, there has been much talk of Amma’s return.

The present DMK-BJP rift was triggered off on March 23 when Amma implemented a scheme announced in Governor P.S. Ramamohan Rao’s address to the state assembly on March 9. "An Annadaanam scheme to provide free mid-day meals to devotees will be started in select temples with donor participation. A separate hundi will be kept in these temples inviting contributions from devotees. These temples will also organise classes every Sunday for at least one hour to impart spiritual and moral education to children." The last part has especially pleased the Sangh parivar. The DMK’s senior leaders, in line with their ‘rationalist’ credo, expressed apprehension, saying it might lead to subverting of young, impressionable minds.

Jayalalitha kicked off the scheme at the Kapaleeswara temple in the Brahmin-dominated locality of Mylapore in Chennai, donating Rs 6,000 to the hundi and topping it with a grand lunch that included 19 dishes. The chief minister, photographers and video cameras in tow, personally waited on the first batch and even served the food. Some 2,000 devotees partook of the feast, with each meal costing Rs 80. Expectedly, the BJP top brass was in full attendance, some had even come as special invitees. Local MLA K.N. Lakshmanan, state BJP president S.P. Kirubanidhi, general secretary L. Ganesan, besides scores of Vishwa Hindu Parishad functionaries gleefully registered their presence. "How can the BJP stay away from a temple-related affair? It is close to our heart," reasoned Ganesan. "Jayalalitha’s decision to launch the scheme shows that she closely identifies with Hindutva ideology," said Kirubanidhi.

The smorgasbord for the ‘devout’ comes at a time when the state is in a financial mess. There is also the small matter of there being no such free lunches in the mosques or churches. Not that Jayalalitha, who runs a "Muslim-free cabinet", was ever expected to extend such niceties across religions. With an absolute majority and only a few court cases to haunt her, she doesn’t feel constrained to "appease" any section. The fact is that she is now free to pander to her constituency and present support base, the Brahmin and Thevar communities.

The AIADMK chief’s proximity to the BJP and the RSS is nothing new. In the build-up to the assembly elections last year, local BJP leaders were in close touch with her. In fact, some of them even impressed upon party leaders in Delhi the need to have Amma on the BJP’s side. Local RSS and VHP leaders had also met Jayalalitha, even though at that point she was in a ‘secular’ alliance with the TMC and the Congress. At that point itself, some of the comments made by the state BJP leaders had surprised even the party’s leaders in Delhi. Her ties with the Sangh parivar have only strengthened after her return to power.

Incidentally, Jayalalitha was the only non-BJP chief minister to welcome the March 17 Bangalore resolution of the RSS, asking Muslims to fall in line and show respect to the majority Hindu community. This has come as no surprise to Amma watchers here since she had always been a vocal and strident advocate of ‘resurgent’ Hinduism, and one of the earliest supporters for the Ram temple in Ayodhya. The very next day, at the DMK general council meeting, Karunanidhi, protesting the open support of the BJP to the AIADMK, wondered if there was any need for the party to continue in the state-level NDA. He again found refuge in words: they would maintain a friendship with the BJP, not a relationship.

According to BJP insiders, Karunanidhi doesn’t want his ministers back from the Centre, especially at this juncture when he’s on a weak wicket in the state. Murasoli Maran and Co would also certainly not like things to be taken that far. Also, many believe that without the insurance which comes from being part of the Union government, DMK leaders would be open to targeting by the state government. This perhaps was the reason why the DMK general council, while being severely critical of the BJP state unit, heaped praise on "the leadership of A.B. Vajpayee". The BJP in Delhi has also not shown undue alarm at the piquant situation faced by its ally in Chennai. Party chief and pointsman for Tamil Nadu Jana Krishnamurthy went to put an end to the statements/counter-statements from the state BJP and the DMK.

What is interesting is that the terms of political discourse in the state are now being dictated by the Puratchi Thalaivi. In November last year, when the AIADMK extended support to POTO, Karunanidhi cried foul and Jayalalitha chided him asking him not to "shriek in alarm". While the AIADMK has been extending "issue-based support" to the Hindutva dispensation at the Centre, the BJP has been reciprocating the gesture in the state. This bonhomie has no doubt irritated the DMK chief, but all that he has been able to do is indulge in some occasional posturing. Mostly, it has been Jayalalitha’s moves that have created confusion in the ranks of her rivals in the state.

On his own, Karunanidhi has taken little initiative. In fact, he had even welcomed the Kanchi Shankaracharya’s mediation in the Ayodhya dispute. Besides, the NDA in the state has been a politically sterile and unstable entity. The Ramdoss-led PMK (five MPs) walked out during the assembly elections to join hands with the AIADMK, only to walk right back five months after "being poorly treated by Amma". Vaiko’s MDMK is part of the national NDA but has kept aloof of the same in the state. Many in the DMK cannot forgive the acrimonious manner in which Vaiko walked out from the party to form his own outfit in 1994. All along, the MDMK had seen the DMK as its political foe No. 1. The NDA alliance in the state, strung together by the BJP, was never a cohesive front.

With no immediate elections in the state, Jayalalitha is in no way pressed to announce a formal realignment with the BJP right now at the state level. But just to create confusion, she may well offer the party one of the three constituencies where byelections are due. And the BJP might just bite the bait depending on how safe its government is at that point. The DMK has 12 MPs in the Lok Sabha against the AIADMK’s 11.

Meanwhile, the AIADMK could well work towards pushing its way back into the NDA government. Given the BJP’s open door policy to all, even independents, Amma’s party has every reason to be optimistic. In fact, the AIADMK chief’s high-profile advisors like former president R. Venkataraman have been working towards this. And given the fact that the BJP would prefer a friendly state government in Tamil Nadu at the time of the next general elections, it could very well woo Jayalalitha. For now, the ball is in Amma’s court to do as she pleases. She has to make the next move.