Leaving the baggage of his past behind, Sanjay Dutt makes his final comeback 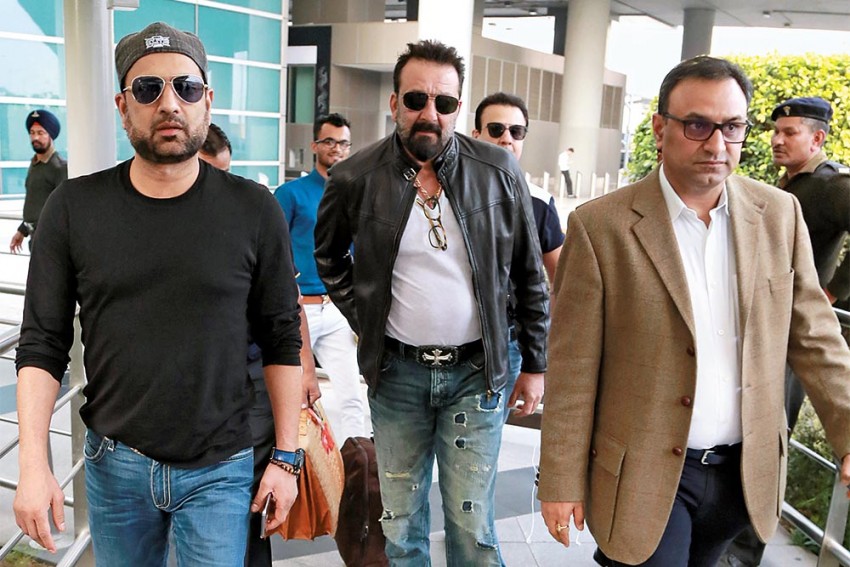 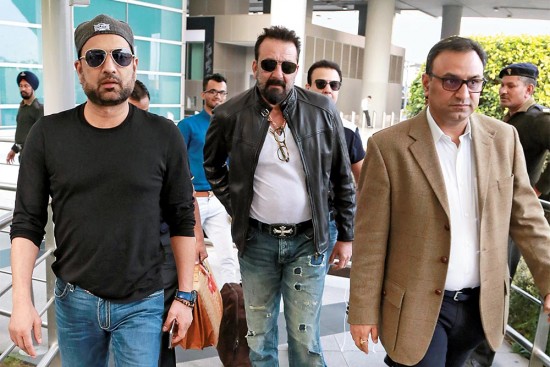 There is an unusual buzz in the bustling Tajganj area of Agra, not far from the Taj ­Mahal, on Wednesday where a big crowd is waiting ­patiently for a glimpse of Sanjay Dutt, who is about to resume his ­career with a shoot for Bhoomi, his much-awaited re-launch vehicle in Bollywood.

As a bearded Dutt enters the location in his trademark gait, there is a hint of nervousness on his face—a long-awaited comeback can remind one of a debut. A loud cheer from the crowd dispels the tension, brings a faint smile on his face. The veteran looks a bit reassured now as he waves to the crowds before facing the camera for the ambitious project being helmed by director Omung Kumar of the Mary Kom and Sarabjit fame.

It must have been déjà vu for the 57-year-old actor, as he has been through similar situations more than once in the past. As a matter of fact, Dutt may well have forgotten how many times he has staged such a comeback and made his mark in the tinsel town marquee before the recurring quirk of fate, a protracted legal battle, interrupted his rides to fame. But now, he is a free bird, with the baggage of the tumultuous past way behind him, ready to pick up the threads of his career from where he left off four years ago. 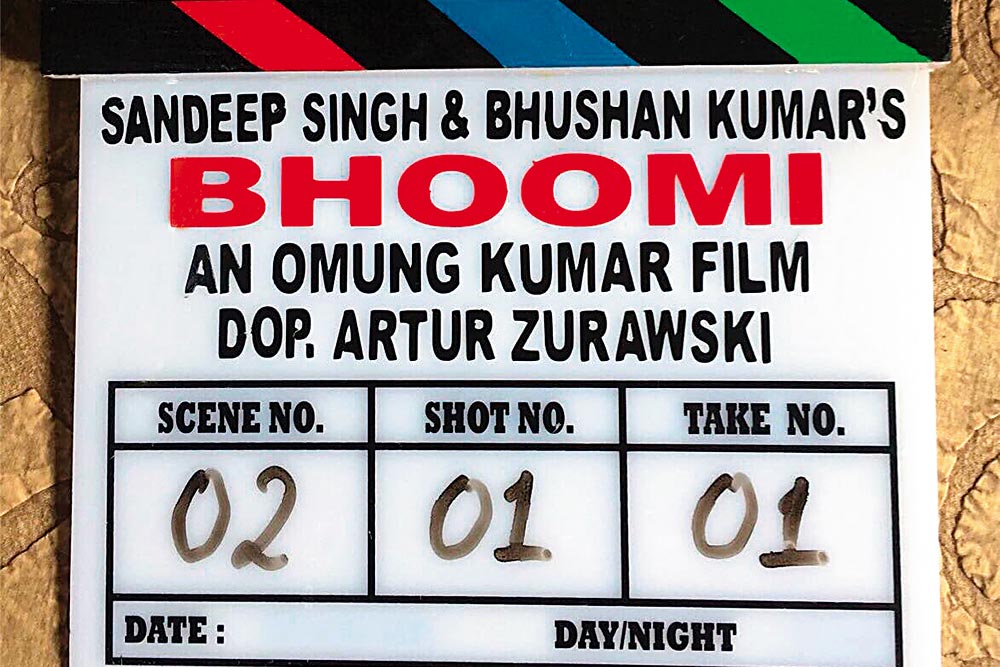 “Bhoomi is extra ­special primarily because it is Dutt’s comeback. It’s great to have him back where he belongs.”

And yet, it has taken almost a year for him, since he left Pune’s Yerawada jail, to choose his first film. “I had been looking for scripts that went beyond my screen persona,” he says. “I wanted to do something vulnerable yet powerful. Bhoomi is an emotional and sensitive drama that explores the relationship between a father and a daughter.”

Choosing the right subject was, of course, not easy for him. Since he made his debut in Rocky (1981), he has had a chequered career marked by upheavals caused by personal problems ranging from drug addiction to prison terms. Arrested for the first time on the charge of possessing illegal weapons in the wake of the 1993 Mumbai bomb blasts, Dutt had been in and out of prison; his last sojourn behind the bars being an almost three-year-long stay in Pune’s Yerawada jail after the Supreme Court held him guilty under the arms act in 2013. The term ended in February last year.

This time, Bollywood’s best-known ‘comeback man’ returns in a mature ava­tar in front of the camera, with a clean slate, to play a father to Aditi Rao Hydari in a pivotal role in a revenge drama that he thinks will give him an immense scope to showcase his histrionics.

Bollywood could not probably have waited for long for his final comeback to see if his prolonged incarceration has blunted his talent, his star appeal or the pull at the box office. Of course,there has been no dearth of film makers who are vying with each other to put their money on Dutt and want him back on screen at the earliest. “Bhoomi is extra special to me primarily because it is Dutt’s comeback film,” says Omung “It is great to have him back where he belongs—in front of the camera. Bhoomi is an emotional revenge drama that centres around the relationship between a ­father and his daughter.”

Dutt was last seen on the screen in the Aamir Khan-blockbuster, PK (2013)—which was released after he was imprisoned. Vidhu Vinod Chopra’s Marco Bhau was initially supposed to be Dutt’s first film after his return. Chopra’s next on his popular Munnabhai series, which saw Dutt essaying his career’s best roles, was also in the pipeline and so was the next project of director Siddharth Anand (of the Bang Bang, 2014, fame). And then, there were also talks about a sequel to Mahesh Bhatt’s 1991-hit, Sadak. But at the end, it is Bhoomi that got Dutt’s nod as being the first film in his new innings.

Bhushan Kumar of T-Series, who is producing the film along with Omung and Sandeep Singh of Legend Studios, says everybody is looking forward to the film, and there is much enthusiasm ‘over the comeback of Baba (Dutt’s nickname) on screen’. “There is also the exciting father-daughter jodi played by Dutt and Aditi in the film,” he says. “His versa­tility will be on display. We are all geared up for the making of the film in Agra, where the unit will camp for about 50 days.”

The movie, which has Sharad Kelkar in the antagonist’s role and also marks the return of Shekhar Suman on the big screen after many years, is scheduled to release on August 4. Singh says that Dutt believed in the subject from the day he heard it. “He has been the driving force behind this film. Its story will buck the trend. This schedule is going to be an emotional one for me,” says Singh, who has co-produced and written the film. “Hats off to Dutt for the way he is making this comeback, fighting the odds and coming out as a winner.” 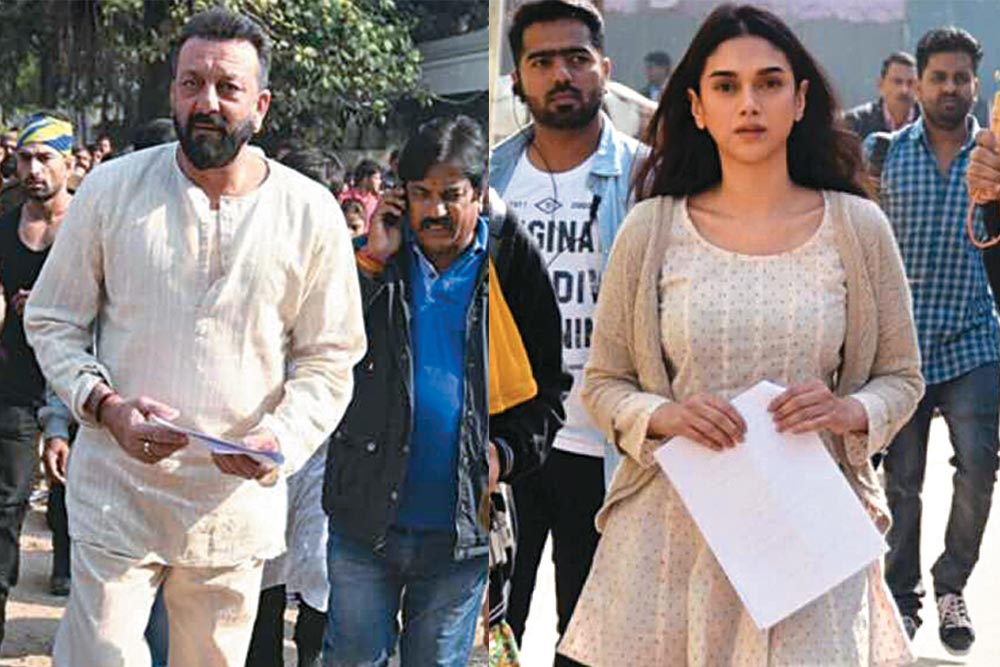 Dutt (left) and Aditi Rao Hydari on the sets of Bhoomi

But then, Dutt has been no stranger to such struggles. Even after his high-profile debut in Rocky, which was followed by the Subhash Ghai-hit Vidhaata (1982), he had to undergo treatment for his drug problems in the US that brought his ­career to an abrupt halt. Post-reha­bi­litation, he made a successful comeback with Ajay Kashyap’s Jaan ki Bazi (1985). But his talent was first noticed in Mahesh Bhatt’s ’s Naam (1986). Bhatt went on to do a handful of movies with Dutt, including Sadak, which catapulted him into the big league. Following it up with the super success of Lawrence D’Souza’s Saajan (1991) around the same time, he came tantalisingly close to the numero UNO position at the box office in the post-­Amitabh Bachchan era, when his arrest in the wake of the Mumbai blasts put paid to his hopes. Given the nature of the charges related to aiding and abetting terrorism levelled against him at that time, the industry was quick to write him off. But he fought back despite odds.

Dutt’s close associates believe that he has always faced the vicissitudes of life with equanimity and closed the black chapter of his life now. “Forget about those days of Dutt. He has left his past behind, as he begins his career afresh,” says Kashyap, who had directed him in Jaan ki Baazi. “He is resilient enough to bounce back and has a bright future ahead.”

Dutt has remained a saught-after star all these years, despite a prolonged legal battle, because of his fan ­following and goodwill.

Trade experts believe that the court cases that dragged on for more than two decades at the prime of  Dutt’s career might have harmed it, but his worst is over now. “Many producers were wary of casting him because of his legal pro­blems earlier,” says film writer R Mohan. “But now, he has got over that phase and will have an array of roles exclusively written for him.”

It is to his credit that in between his jail terms, Dutt pulled off several creditable performances in movies such as Mahesh Manjrekar’s Vaastav (1999), which not only earned critical acclaim but also commercial success. In fact, he reached the acme of his career with Raj Kumar Hirani’s Munnabhai MBBS (2003), but what would have been the best phase of his career was once again rudely interrupted by his conviction by the TADA court, barely two months after the release of Lage Raho Munnabhai (2006), the second movie in the Munnabhai series.

In fact, Dutt’s life, both personal and professional, has been such a roller-coaster ride over the years that it has prompted Raj Kumar Hirani, director of the Munnabhai series, to make a biopic on him. With Ranbir Kapoor essaying Dutt’s character, his biopic is expected to release later this year.

Bollywood watchers believe that Dutt has remained a much sought-after star all these years, despite fighting an ­uncertain and prolonged legal battle, more because of his fan following and his goodwill in the film industry than his acting prowess in particular. Director Leena Yadav, who ­directed Dutt and Aishwarya Rai in her debut-making movie, Shabd (2005), says Dutt was a big pillar of support to her during the making of her maiden film. “Even though I was a debutante director, he extended all support to me during the making of Shabd. I am sure he will come up with very good films on his return.” Leena, who directed the critically acc­laimed Parched (2016) recently, considers him to be as an actor of immense potential and possibilities. “Whenever he has put his heart and soul into any movie, he has come up with a great performance,” says Yadav. “All he needs to do is put his heart into his role. If he manages to do that, his per­formance will match up to international standards.”

That may well be a matter of debate among the critics, but Dutt certainly has a chance now to live up to all expectations in his final comeback, howsoever lofty they may sound.