It's bigger than Nalanda and Bodh Gaya. A 4th century Buddhist/Shaivite site is discovered in Chhattisgarh. 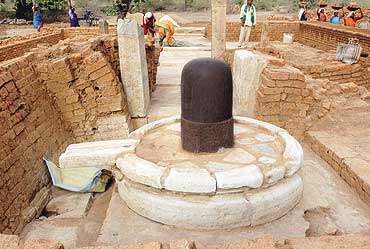 Earlier a Buddhist site, Sirpur seems to have been taken over by the Shaivites subsequently. There is even a possibility that Buddhism and Hinduism prospered simultaneously under a benevolent ruler here. To go back in history, Sirpur was the capital of the ancient South Kosala kingdom between the 4th and 6th centuries AD. Spread over an area of 25 sq km, the Sirpur archaeological complex is almost four times as big as Nalanda. Lengthwise, the Sirpur site extends almost seven km. In comparison, Bodh Gaya, also in Bihar, is less than three km long.

"This is a fit case for UNESCO's world heritage site list," says Arun Kumar Sharma, an ex-superintending archaeologist with the ASI who's now been engaged by the state to conduct the excavations. The government has already declared an area of 100 acres around the site a "heritage zone" and has constituted a special task force, headed by the additional chief secretary and comprising historians, archaeologists and representatives of various government departments, to coordinate the effort. Chhattisgarh has sought Rs 8 crore from the Union government and a proposal for a grant of 450 million yen has been forwarded to the government of Japan for the development and preservation of the site. Chhattisgarh now hopes to develop Sirpur as a major international tourist attraction, especially as a big point on the Buddhist pilgrim map. A botanical garden will come up in the area and a star hotel is also on the anvil.