HIV And The Hive Of Security

It's a community on the make. The AIDS scare spawns its own collective antidote. 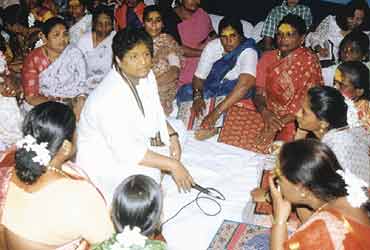 outlookindia.com
-0001-11-30T00:00:00+0553
A woman weeps inconsolably at the Sangli office of Sangram, an NGO working to empower HIV-positive sex workers. Left with an HIV-positive granddaughter and memories of her husband and son-in-law lost to AIDS, she has come to seek solace from Meena Saraswathi Seshu, Sangram’s 42-year-old foun-der-general secretary lauded by the Human Rights Watch as a ‘Global Rights Defender’ for fighting AIDS as a human rights issue. "The epidemic is no longer restricted to high-risk groups," the woman says. "Too many orphans, widows are fighting for their lives."

Extolled as the "AIDS and human rights hero of South Asia", Seshu spells as much hope for housewives, like the visitor, as the stigmatised women hustled into the vagaries of the world’s oldest profession.

Seshu is not one to subscribe to prohibition. Her belief in medical and social intervention has seen her weather many attacks on life and character to successfully enable over 5,000 brothel-based and itinerant CSWs (commercial sex workers), both male and female, across seven districts in Maharashtra and Karnataka to avail of condoms, learn about HIV-AIDS and access medical and legal help through a 165-strong peer network. Based in a truckers’ hub notorious for commercial sex, Sangram’s ambit also encompasses sex education in schools and reaching out to women contracting the virus from their husbands.

In 1996, the peer education programme that enabled CSWs help their ilk lead better lives grew into vamp (Veshya AIDS Muqabla Parishad), a self-run collective of CSWs that has armed them to fight for their rights. It today distributes 3,50,000 condoms every month, arbitrates community disputes, lobbies with the police, helps the repudiated women access government schemes and civil hospitals, and addresses issues like violence against women and alternative sexualities. Today, the internal violence endemic to red-light areas has ebbed, thanks to mohalla committees. All CSWs push their ‘clients’ to wear condoms. They raise kids without fear and have got the primary health centres to work late hours to accommodate their schedules.

"Our understanding of prostitution is moralistic, value-ridden," says Seshu, the Tata Institute of Social Sciences alumnus who started working for devdasis in Karnataka’s Nippani in 1986. In 1991, after breaking news of a pregnant woman being administered HIV-positive blood, she resolved to work for "a constituency associated with HIV transmission". It wasn’t easy. Seshu was often eschewed by the very women she wanted to redeem. Then there were politicians holding the moral high ground against the CSWs banding together. They targeted Seshu and her group. But she didn’t give up.

With customary raids on red-light areas and brazen refusal to file complaints, the police made these "aberrant" citizens more susceptible to the killer virus by forcing them underground. "For AIDS control, the health department talks with us and not the police," avers Seshu. The medical fraternity is another stumbling block. "They still don’t believe they can treat HIV-positive people." Sangram—which is shorthand for Sampada Grameen Mahila Sanstha—now espouses serious advocacy issues at the regional and national levels, and can be contacted at: Aarohan, Ghansham Nagar, Madhav Nagar Road, Sangli - 416416 Tel: (0233) 2312191/2311644