History On The Move 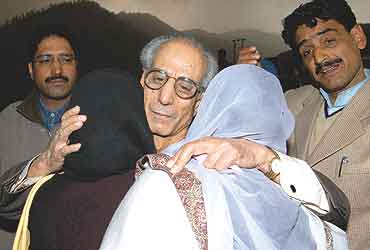 It took on a momentum of its own. The ceremonial act, when Prime Minister Manmohan Singh and UPA chairperson Sonia Gandhi flagged off the 35-seater deluxe bus to Muzaffarabad on April 7 from Srinagar’s Sher-e-Kashmir Stadium, also marked a moment when government resolve matched popular defiance and courage in the face of militant threats. For, the 21 passengers on board had had a close shave less than 18 hours ago when fidayeen attacked their safe house at the Tourist Reception Centre in Srinagar. The vehicle that would take them to the LoC had been christened the Caravan of Peace. But on that wet April morning, it looked more like a bus on a hazardous mission. The 21 on board were nervous, yet resolute, "soldiers of peace", as Sonia Gandhi described them.

They had their fingers crossed as a security cordon, impressive even by Kashmir standards, set off with them on a 170-km journey that would unite them with their families across the LoC after 57 long years. Several thousand families were brutally divided by the LoC in 1948. It cut off husbands from wives, mothers and fathers from children, brothers from sisters. The reopening of the old road to Muzaffarabad has renewed hope for thousands of families on both sides. It also conjured up visions of, ultimately, an open ‘border’ between the two Kashmirs, holding the promise of a new peace between India and Pakistan.

In the subcontinent, historic moments tend to linger irritatingly beyond the appointed hour. At the renovated bus terminal here on April 7, the spiffy bus was waiting to roll out, and the 30 fortunate passengers were eager to board it. But choreographed state shows always lack the heady fizz of spontaneity, entangled as these are in elaborate ceremonies. Before the bus was flagged off, verses from the Quran were read out and the prime minister of Pakistan's Kashmir, Sardar Sikandar Hayat Khan, delivered a speech. As the bus glided out of the terminal, in a shower of rose petals, the 2,000-strong crowd tossed around with abandon; the historic moment had been delayed by precisely 57 minutes.

Some in India may think the ceremony in Muzaffarabad was low-key in comparison to the flag-off in Srinagar, where Manmohan Singh and Sonia Gandhi graced the occasion. The comparison ignores politically loaded nomenclatures: Pakistan's Kashmir is Azad Kashmir; it has a prime minister; Hayat is to Kashmir what Singh is to India. It was feared that the presence of, say, Prime Minister Shaukat Aziz at the ceremony could have amounted to tacitly accepting the LoC as the international border.

That Kashmir is a political issue was palpable during Hayat's speech. He said, "The start of the bus service is a historic step, but as long as there is abuse of human rights in the (Indian) occupied Kashmir, political prisoners are in jail, a ban on freedom of expression..., the bus service will not be able to create a genuine goodwill." In Pak-Indo relations, politics and emotions can never be separated. Really? Read on...

As A Void Vanishes