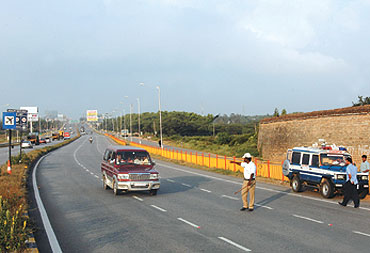 outlookindia.com
-0001-11-30T00:00:00+0553
Niranjan Kumar, a traffic sub-inspector on one of the dangerous bends on NH7, en route the new Bangalore International Airport, books some 50 to 70 overspeeding motorists every day. Four of his colleagues, at different jurisdictional points, nab around the same number between Hebbal and the new airport. Given the reputation of policemen, this may cynically be interpreted as another ploy for harassment, but on the contrary, the close monitoring has helped bring down the death statistics on this killer highway.

Ever since the new airport was commissioned eight months ago, speeding vehicles have killed nearly 38 people and injured over a hundred—an average of five deaths a month, mostly pedestrians who try to cross this six-lane stretch. There are eight dangerous crossings on this 35 km stretch and exactly half-a-dozen accident-prone bends.

Despite the maximum speed limit of 80 km for lane one of the highway, cars and taxis average around 120 km per hour. And the monster lorries too, undettered, habitually violate lane discipline.

Every single death has led to the road shutting down for several hours by protesting villagers. "The deaths would have been higher had the railings not been put up, signal lights not introduced and if the roads had not been illuminated. Although the airport was commissioned in April and there was a sudden burst of traffic, the two traffic police stations came up a good three months later. The maximum deaths occurred in the first three months," says R. Umadevi, inspector at the newly set up Chikkajala traffic police station. Chikkajala area alone has seen nearly 20 deaths since the highway was inaugurated, but has reported only one in October and two in November.

The victims have mainly been workers from the nearby quarries, factories and villages. This stretch also has a number of schools, professional colleges, research institutions, the Jakkur aerodrome and an iaf station, yet there's not a single skywalk or underpass for pedestrians. A letter writer in a local daily pointed out: "Common sense suggests that this road should have regular underpasses connecting outer lanes for local traffic to go across, take turns etc. These underpasses should also serve as pedestrian crossings with a pathway. While we are adding underpasses to existing roads in the city, new ones are being built without it!"

One Nanjappa who saw a biker being crushed by a lorry near Hunasamaranahalli in early November says: "I usually take twenty minutes to cross the road at Settigere. And I have to do it twice a day. People in cars and lorries don't care about those who walk," he says.

Counting the deaths, it appears the new airport made news for all the wrong reasons when it was being commissioned and later. A few months ago, the debate that revolved around the airport concerned building a second runway to handle increasing air traffic; whether the old HAL airport should be kept open and also 'pressing' problems related to connectivity. In the din of this debate the safety of thousands of ordinary people who lived alongside the highway was lost.