A forced mid-career recess, ironically, did the trick... ...it only made Buddhadeb wiser as a chief minister 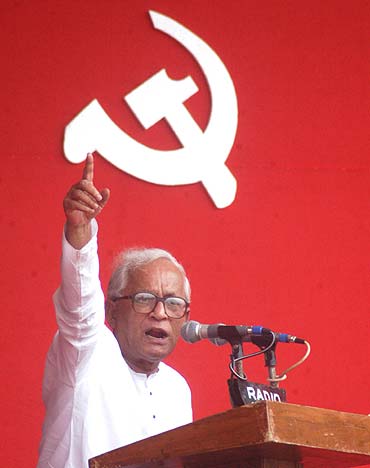 outlookindia.com
-0001-11-30T00:00:00+0553
Revolutions, famously, devour their children. Contemporary Communism has a different worry: its children could be devouring the revolution. The problem is the evolution of revolution. When does change, always inevitable, become betrayal instead of logical continuity?

Mao Zedong's successor, Deng Xiaoping, challenged thousands of pages of doctrine with a single sentence: He didn't care what the colour of the cat was as long as it caught mice. That revisionist Chinese cat set Marxist pigeons aflutter, particularly since it caught mice in unprecedented numbers. At about the same time, the dyed-in-red Russian cat, immobile and obese from a diet of moribund convictions, lost Europe and Central Asia.

Bengal's Marxists were blessed with the good luck of a decent excuse. They could not become midwives of socialism in one province, they argued, because India was a bourgeois state. Jyoti Basu, juggling with extraordinary dexterity between Stalin, democracy and the Bengali bhadralok, delivered a model he literally constructed along the way. The compromise had an interesting fallout. By the time the CPI(M) had won an extraordinary third consecutive term, the victory was attributed as much to his personal charisma as to the party's work among peasants and workers. When a Marxist minister calls Basu a Krishna, as the outspoken Subhas Chakraborty did last month, provoking a rebuke from the correct Basu, you know the party had come as close to idolatry as could be.

It is not easy to be the heir of a demigod. Buddhadeb Bhattacharya's trial run was an obstacle race. Basu dropped him from the cabinet when suspicion arose that there was a hint of impatience in the air. Buddha, as Calcuttans call him, took the snub with a smile. He made it known that he would enjoy the time he would get for cinema, theatre and writing. Sceptics, of whom there is no shortage in Bengal, scoffed that literature was the last refuge of Communists, only to discover that Buddha meant what he said. When Jyoti Basu had made his point, Buddha was brought back into government. Restoration was preliminary to succession. There was nothing personal about exile. It was a signal that neither god nor mortal was above the politburo, a useful hint for a future CM.

When his moment came, Buddha did not seek the impossible; he couldn't reinvent Indian Communism. But he knew he had to make it relevant for the next generation. He also understood that a nodal point of economic regeneration had to be Calcutta. His challenge was to get the Left Front re-elected after 30 years in power. That is far more difficult than getting elected. (It is ironic that a Communist party should be democracy's biggest benefactor, as well as its expert strategist, but paradox is India's preferred phenomenon.)

The CPI(M) may well be the most successful organisation in history to be managed by a committee. The politburo processes policy through various shades of opinion. Since policy is never traded for personal gain, and the track record is one of unprecedented success, a new idea is handled with care, even suspicion. The process included visits to two cats, Vietnam and China, to see how they had dragged socialism into a post-socialism economy. Buddha, being gentle, eased his way forward, leaving the drag to others. Result: a spectacular victory in the last assembly polls. Even Calcutta fell to Marx this year.

A current controversy is symptomatic of the New Age and the new People's Democracy. Buddha is determined to obtain agricultural land for a Tata project just north of Calcutta, while the CPI(M)'s bete noire is shedding copious tears at the alleged injustice to the peasants. Congress leaders are busy wiping those tears in front of media cameras.

The trickiest trap is the one of high expectations. The new voter that Buddha has brought into the Left enclosure is also impatient. The dark facts of the state include a depressed and impoverished rural Muslim population. Moreover, there is no guarantee that a foolish opposition will always remain foolish. But he has five years to deliver, as well as energy and the confidence that comes from a personal victory.

Dr Ashok Mitra, who was Jyoti Basu's finance minister for nine years, once provoked Bengal by saying he was a Communist, not a gentleman. Buddha is narrowing the gap.

(Akbar is editor-in-chief of The Asian Age.)

The Trouble With Being Reborn