...also a single mom who works like a dog, parties hard, loves cricket 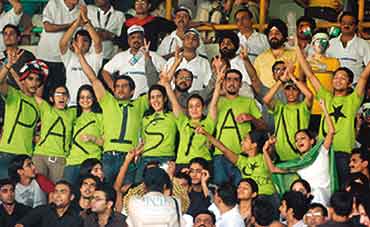 outlookindia.com
-0001-11-30T00:00:00+0553
Karachi rocks! All we Karachiites need is an excuse to party. Forget what the western press writes about our security problems, this metropolis of 14 million regularly goes to balls, theme parties and organises raves. Let me introduce myself: I'm an ex-model, a fashion choreographer, a single mom who works like a dog, parties like there's no tomorrow and loves cricket.

The sheer madness of Indo-Pak cricket matches hit me at the time I was busy preparing for a fashion show for one of our top textile brands, Lawrencepur. The show was scheduled for March 13, the day India and Pakistan were to play the first ODI. It was shifted to March 12 because all my cricket-crazy sub-contractors simply refused to work on the match day!

The theme of the Lawrencepur show was to create life as it was in the colonial era. We hired a 100-year-old warehouse next to a train track and lit it up to evoke the ambience of a pre-Partition railway platform. Models portrayed Hindu and Parsi families. But cricket overtook this show too. With Wasim Akram walking the ramp for the first time, TV channels thronged the venue. Pity, Ravi Shastri couldn't model as he had promised; he couldn't manage a visa.

The night before March 13, Karachi was agog with rumours that Amitabh Bachchan and Shahrukh Khan were in the city. I received several breathless smses beseeching, "Ah, don't forget us when you meet Shahrukh." The Lawrencepur show over, I packed my overnight bag and along with designer Deepak Perwani slept at the house of ace commercial video personality Saqib Malik, who lives near the stadium. Those in India who have a dim view of Pakistan, hear this: Perwani, a Hindu who hails from Mirpurkhas in Sindh, is Pakistan's top menswear designer. A true patriot, Perwani was recently honoured by President Pervez Musharraf with a backstage visit in a show in China.

Next morning, neurosis was in the air. We entered the stadium after a gruelling two-mile trek. The atmosphere was incredible. No fights, no hassles. What surprised us most was the presence of some 5,000 Indians in the stands. Obviously, several Pakistanis had dressed in Indian colours. Indian YPOs (Young Presidents' Organisations) were in air-conditioned boxes, with catering from Sheraton Hotel and TV sets to watch replays. The Hanif Mohammed stand was where Karachi's most beautiful people were, as were those two exciting cricketers from the past—Imran Khan and Zaheer Abbas.

The only Indian celebrity who showed up was Priyanka, accompanied by her husband Robert Vadra and brother Rahul Gandhi. She walked out of the PCB chairman's box to sit in the enclosure with others; at times she would jump up and down to cheer Sehwag and Dravid. Priyanka mesmerised the crowds who cheered her as much as they did the Indian cricketers. Her other engagement in Karachi was to meet Sattar and Bilquis Edhi, who are to Pakistan what Mother Teresa was to India, providing shelter to the homeless and orphans, and burying the dead who have no relatives. Priyanka took to the Edhi Children's Home a basket of handicrafts made by some underprivileged women of Uttar Pradesh. She talked to children animatedly, encouraged them to make something of their lives, and smiled enigmatically at those who wanted to know whether she would contest the elections. If Karachi could vote, Priyanka would romp home.

She said she was confident that the Congress would win the elections. Brother Rahul, who was visiting Pakistan for the second time, preferred to let his sister hog the spotlight. He told The Daily Times he hadn't yet decided on joining politics, though he admitted there was immense pressure on him to do so. Priyanka's grace and charm had many comparing her to Princess Diana.

Security concerns kept Priyanka away from the parties of Ayesha Tammy Haq, who is on the editorial board of The Daily Times and chaperoned Priyanka here, or by architect Habib Fida Ali, who managed to pull in the who's who of the Karachi elite. Imran Khan and the PCB's chief organiser, Zakir Khan, graced the fabulous reception and mixed with the Indians who had flown in. With the stifling security around the Indian team, we wonder how those poor boys will be entertained. Some of them managed to visit the historic ruins of Gandhara and Taxila and looked great in their cargoes and baseball hats. Despite the Islamic militants, we have preserved our common heritage. We are an emotional nation, we love and hate with tremendous passion. Currently, our love knows no boundaries.

(The author writes on fashion and society for The Friday Times, Lahore.)