With just days to go, Brazil kicks it up to make it a World Cup to remember 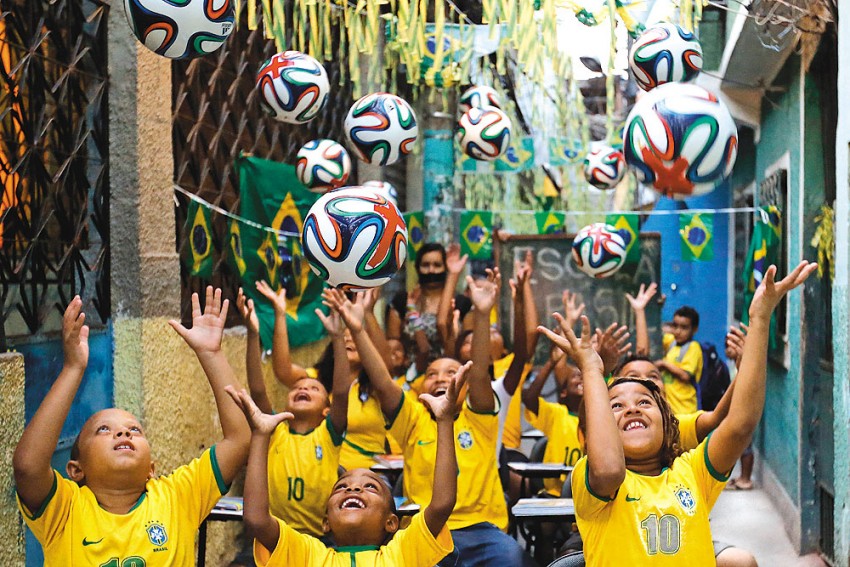 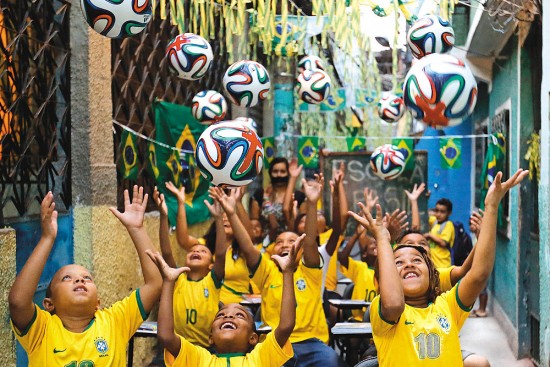 After one has seen a grainy clip of Pele lobbing the ball with his right foot into the French goal in the 1958 World Cup, listened to crackling radio dispatches waxing about Garrincha’s dribbling at the 1962 Cup in Chile, and watched Socrates and Zico play a symphony with their feet in 1982, one enters the ‘Rite of Passage’ section at Sao Paulo’s Museum of Football, where the past comes alive in 3D and digital sou­nds. Inside the Passage, a giant screen plays the last moments of the 1950 World Cup final at the Mar­a­cana. With Brazil and Uruguay tied at 1-1, the slow-motion footage shows Uruguayan striker Ghiggia dashing towards the Brazilian area and as the goalie comes off his line, the tiny forward fires home. “Brazil’s heart stop­ped. Maracana fell silent like a graveyard,” says a baritone, relating the horror of the moment. Every day, as crowds exit the dark room, almost all eyes are wet; even five-year olds stop their chatter.

If a nation is a collective memory, then all Brazilians share a mental scar, which anthropologist Roberto DaMatta calls “perhaps the biggest tragedy in the contemporary history of Brazil”. For a country that suffered 20 years of army rule (1964-84) and a broken economy (till late 1990s), to call a defeat in a game the biggest tragedy sounds insensitive. But few Brazilians would disagree with DaMatta.

When FIFA asked Brazil to host the World Cup in 1950, the football-crazy country got down to show to the world their mastery of jogo de futebol (game of football). Starting in 1948, 10,000 workers toiled daily to build the stad­ium with 1,78,000 seats and space for 42,000 to stand around the pitch. When the Mar­a­cana was inaugurated, a Rio journal captured the nation’s mood: “Today, Brazil has the biggest and the best stadium in the world. Now we have a truly fantastic setting where the whole world can admire our sporting grandeur and prowess.” But it was not meant to be. 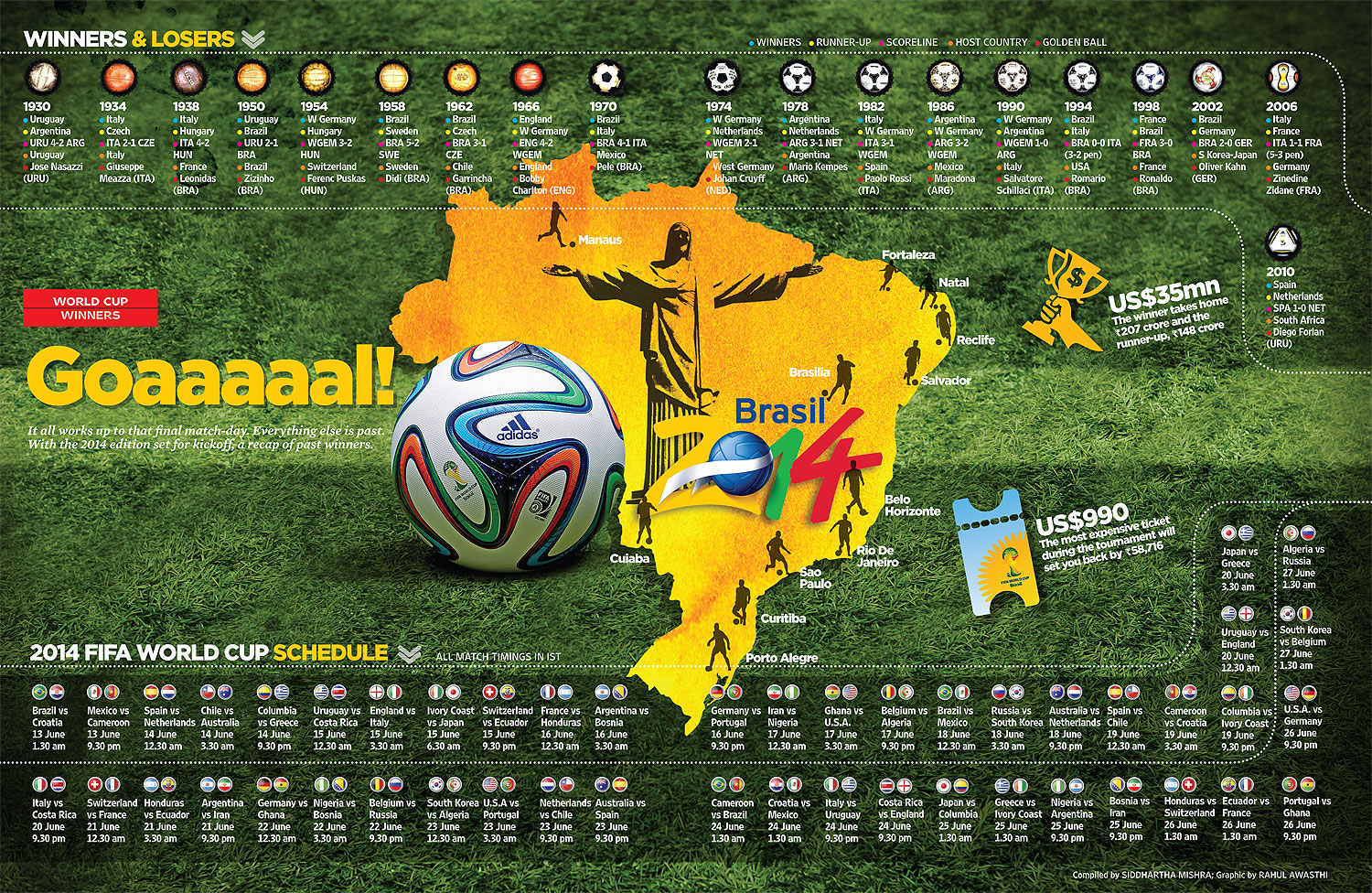 In 1950, Brazil invited the world to appreciate its football. It ended in a disaster. Sixty-four years and five World Cup wins later, the world is heading to Brazil again this June. And some people, mostly in the western media, are predicting that this time it would be a disaster because of “delays, protests and violence”. To an outsider, it may seem that Brazil is “unprepared” for the tournament and its social tensions are igniting fires across the country. But that’s only partially true.

“Anything can happen in football. Sometimes, in the magical realm of football, there is justice.”
—Uruguayan writer Eduardo Galeano

For one thing, 2014 is not 1950. For most Brazilians, this World Cup is not just about football. Having won it more times than any other country, they have nothing to prove. This cup is about Brazil, which has changed dramatically in recent years. Since 2002, when President Lula of the Workers Party came to power, the country has developed enormous economic clout and political muscle. In 2012, Brazil overtook both France and the UK to become the world’s 6th largest economy. In 10 years, Brazil has lifted 50 million people out of poverty; it has rec­ord low unemployment; des­pite the global slowdown, wages are rising here; and it has become the fav­o­urite destination for Europeans running away from their broken economies. An important member of groups like BRICS and G-20, Brazil is now leading global efforts in redefining internet governance. “In 1950, if someone had protested against the Cup, he would have been branded as mad. Today, people can protest because we have democracy and Brazil is not just a football nation. People don’t seek justice only on the football pitch,” says Sonia Carvalho, 74, whose eyes still turn liquid at the mention of 1950.

In those days, Brazil was poor, unequal, racist and brutal. With wide income gaps, strict social hierarchies and lawlessness being the norm, the men trapped in poverty had only one way out: football. As real life offered no opportunities, let alone a  level-playing field, the poor sought justice in the magic realism of football, where they could bend social realities—race and class divisions—with their tricky legs and move up the ladder. It’s no coincidence that all the football greats—Didi, Pele, Garrincha, Romario, Bebeto and Ron­aldo—came from the wrong side of the tracks. “Football was always the game of the poor. They had to break rules to be successful. So they changed the way football was played by Europeans and made it joyful. With their victories, they escaped poverty and gave hope to the millions like them,” says Leonardo Alves, who trains young boys at a Corinthians football school here. “Over time, it bec­ame part of our DNA.” 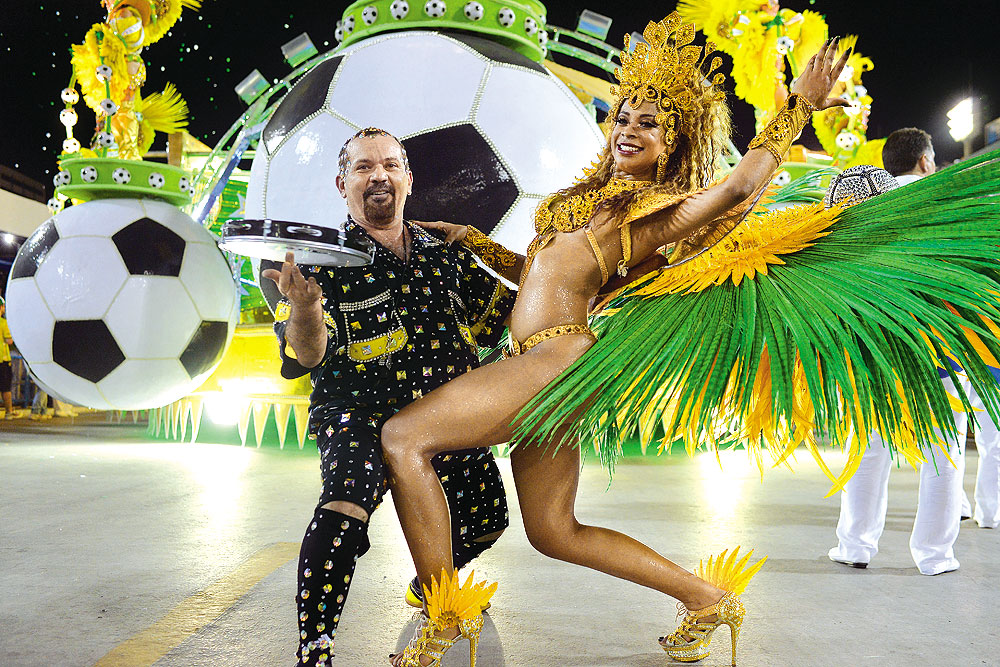 ‘Ginga’ Samba mini-carnivals are scheduled through the tournament. (Photograph by AFP, From Outlook 16 June 2014)

In Brazil, football is not a sporting activity. It’s not a religion. It’s not the opium of the masses. Here, it works as a social glue. It’s on the football pitch that generations have realised their fantasies. As one travels across this continent-sized country, one can see the Brazilians’ love for the game. In the countryside, even hamlets with five houses have full-size football fields. And boys—barefoot and bare-chested—can be seen playing in their backyards, in parking lots, on beaches, in parks, public squares, on streets, in schoolyards and factories. Where there is an open area, there is a game on. If they don’t have a leather ball, they make do with a ball of rubber or cloth. The beggars just play with empty beer cans. A Brazilian has to play football.

In such a country, the World Cup sho­uld be one big party. But since the Con­federations Cup last year witnessed pro­tests across the country, there have been fears of streets swelling with anger again. Some experts believe the Cup is just a trigger for long-suppressed anger against the country’s ruling system. “Hos­­ting this party does not make Braz­ilians totally blind to what it means to the country. The government has repeatedly said it was about projecting the country, boosting tourism and investment. There were high expectations. There is anger because part of those expectations has been deceived. Little infrastructure was built, costs of stadiums were higher than the expected, people were evicted from their houses, and police has been brutal in repressing dissent,” says Laura Wais­bich, a political scientist with Cebrap, a Sao Paulo-based think-tank.

People are not just worried about Brazil winning the Cup this time, they want to see a “well-organised tournament”.

But Brazilian leaders are confident of a great tournament. President Dilma Rou­sseff, who will be seeking re-election in October, has promised a “Cup of Cups”. Brazil has really thrown the kitchen sink at the World Cup, with the government spending US $14 billion on futuristic sta­diums, roads and airports. With all of 3.2 million tickets sold and 6,00,000 foreign tourists expected, the government hopes to earn $11 billion in revenue, more than 20 times what South Africa made in 2010. The event could be a game-changer for Brazil, says sports minister Aldo Rebelo, who is cross with the media for paying “too much attention” to missed deadlines. “There is a campaign against the World Cup by desperate sectors. But it won’t be eno­ugh,” says Rebelo. “Now the protests are getting smaller and common people are looking forward to the games.”

Rebelo is right about the protests. In recent weeks, except for small unions, no one has joined the demonstrations. But that doesn’t mean there are no pro­blems. Recently, Brazilian Marines had to enter the slums in Rio de Janeiro to push out drug gangs. Sao Paulo’s most dreaded gang, the PCC, has promised a “World Cup of terror”. The Black Bloc, an anarchist group, has thr­e­ate­ned to spread chaos during the Cup.

But with just a few days to go before the first game in Sao Paulo on June 12, the mood has changed. From big cities to small towns, shops and streets are awash with those Brazilian colours: green and yellow. In metro trains to coffee shops to residential blocks, people are talking about Copa do Mundo. But the expectations are different from 1950. People are not just worried about Brazil’s chances of winning the title sixth time.

“We want a good tournament that is well organised. Brazil made a commitment and it’s now our duty to see that everything goes well. That’s why the protest crowds have become thin and people are lapping up the Cup merchandise,” says Angela Klinke, a columnist for the top financial paper Valor and author of best-selling novel Luxury & Crime. “We just don’t want to show our football, we also want to show Brazil to the world,” says the widely read Klinke (she writes mostly about high-end luxury goods). “People want to see Brazil win the Cup, but they also want it to be a successful event.”

This is how Brazil has changed since 1950, when the country had nothing else to show but its ability to dribble the ball. “It is no longer the eternal ‘country of the future’. The country today is more prosperous and equitable than it was six decades ago. The people, especially the poor, now believe in themsel­ves and the possibilities of the cou­n­try,” says ex-president Lula, who started social welfare programmes like Bolsa Familia, which benefited millions.

Indeed, it’s the working class and the new middle class which is most excited about the Cup. More than 4,00,000 tic­k­ets are being sold at a discount to Bra­zilians, with a huge chunk going to the poor. Around 50,000 tickets have been given free to workers involved in the construction of stadiums. “I could never have afforded it, but now I have a free ticket,” says Ana Maria, a 34-year-old maid who lives on the fringes of Sao Paulo. “Our life has never been better and the World Cup is the time to celebrate,” says Maria, a beneficiary of a new law which guarantees a minimum wage of US $320 and overtime after 44 hours a week and other benefits to six million maids and cooks like her. “For the first time, we are real participants in what’s happening in Brazil.”

That’s a big change. The poor now don’t seek justice only in the magic rea­lism of football, but also in social policies of elected governments. The children of the new middle class, mostly black or mixed race, are now going to universities and getting middle-income jobs. “The protests last year were a cry for the state to do more. It’s good that people are demanding more social justice. They feel empowered. They want a better life,” says Lula.

Futebol still creates the sense of collective in this country with 500 years of history, but people now pay as much attention to social policies as to the sport. The 1950 defeat, according to DaMatta, was a tragedy because “it brought about a collective feeling of the loss of an historical opportunity”. There was another reason for the pain it caused. “It took place when Brazil tried to achieve its destiny as a great nation,” wrote DaMatta in an essay.

Brazil is now the B of BRICS. It has one of the most stable currencies. It has buried most of the ghosts of its past. It is now at the cusp of greatness—even beyond football. And it’s not in a mood to miss the opportunity this time.

By Shobhan Saxena in Sao Paulo