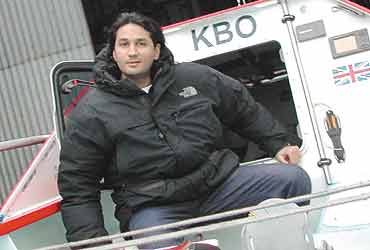 When Bhavik Gandhi dreams, he dreams of the high seas, battling four-storey-high waves, killer storms and gale winds of terrifying force. Of becoming the first Asian to row across the Atlantic Ocean solo, unassisted by motors, sails or any other support. En route could be Great Whites, mean currents and a whole marine menu of dangers. If he completes the feat, he will be only the 23rd person to row across the mammoth blue expanse, purely relying on his will and muscles.

The Mumbai-born Gujarati, now based in Stockholm, will roughly retrace the route Christopher Columbus took in search of India five centuries ago. Gandhi will set off from La Gomera in Spain and will land in Antigua in the Caribbean, cutting across the notorious Bermuda Triangle in the bargain. And he’s not content being the first Asian to undertake the challenge. He told Outlook from La Gomera: "I’m also attempting to break the current record for the fastest modern-day crossing, held by Emmanuel Coindre." To become the record holder, he will need to finish rowing the distance—approximately 3,000 miles or 4,800 km—in less than 42 days and 14 hours. Considering the Frenchman only managed it on his second attempt in 2004, this would be an achievement rivalling almost any other sporting distinction by an Indian.

Gandhi was scheduled to begin his voyage on March 16, but at the last minute his departure was delayed by the meteorological department due to strong southerly winds along the coast of Spain. He will be taking to the sea any time this week in Miss Olive, a 23-foot boat designed by marine vessel specialists Phill Morrison & Peter Rowsell.

This isn’t the first time this former Bombay Scottish H.S. student has set himself steep goals. A self-confessed "endurance freak", he’s climbed Himalayan peaks, bicycled the 3,000 km from Stockholm to Istanbul, been...