"He's Been Taken Care Of"

The TRAI chief's RIL 'connections' put him in a spot again 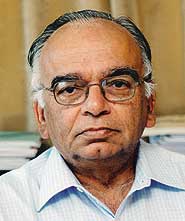 For a long time, his critics have alleged he had a "Reliance bias". And the impression got credence by a sensational revelation recently. An e-mail, written by Manoj Modi, director, Reliance Infocomm, to his "Boss" (Mukesh Ambani) hinted at the close proximity between Reliance and Pradip Baijal, chairman, Telecom Regulatory Authority of India. For the hundredth time, Baijal was in the line of fire. His critics were screaming for his head again. The e-mail also clarifies apprehensions raised by Akhil Gupta, ex-CEO (business development), Reliance Infocomm, against his company's re-routing operations. But the wording was devastating as far as Baijal was concerned. "With reference to my e-mail sent last week clarifying concerns raised by Mr Akhil Gupta, I want to inform you that I have personally spoken to the regulator PB (Pradip Baijal) today and have convinced him of our intention. We are also ensuring that he's taken good care of. Respectfully, MM (Manoj Modi)," it read.

While Infocomm managers refused to comment on the veracity of the e-mail, Baijal decided to take the bull by the horn. In an exclusive phone interview with Outlook, he said: "The e-mail seems to be a fraud. I am consulting my lawyers to take action against the publications which printed it. I have not met Manoj Modi for a year. Before that, I met him during the presentations that Reliance Infocomm gave during the height of the CDMA-GSM controversy. Modi was one of the Reliance managers who was present at the meetings. We've never discussed the re-routing issue. If I was supporting Reliance on it, why would I have forwarded the complaint I received to the vigilance wing of the DoT? Couldn't I have just sat on it without taking any action? And, even if you agree that I favoured Reliance, do you think Modi is the kind of person who would put down such sensitive things in an e-mail? Wouldn't he have just walked into his boss' room and discussed it verbally with him?" Well, we'll have to ask Modi about that one.