Heroes In Search Of A Plaque

They were part of the Indian National Army, fighting for Independence. Today, they are nobodies. 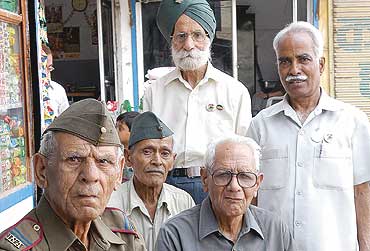 outlookindia.com
-0001-11-30T00:00:00+0553
Nearly 60 years after the Indian National Army (INA) was disbanded, all that Lakshmi Indira Panda has to show for her role in the freedom struggle are a few torn pamphlets in Oriya which depict her wielding a .303 rifle. Today, living in the shadows of Jeypur in Orissa's Koraput district, Panda ekes out a living as a domestic servant washing utensils from house to house. Surviving on a measly pension of Rs 700 a month granted by the state government, Panda has fought a lonely battle with the government of India seeking recognition as someone who served in Subhash Chandra Bose's INA. If the government grants her her due, then she will be entitled to a pension of about Rs 8,000 and a tamba patra (copper plaque) recognising her role in the Independence struggle. 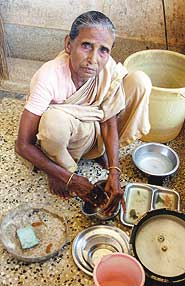 Ironically, Panda's name is included in a register of personnel who served in the Rani Jhansi Regiment of the INA. This list was prepared by the ministry of home affairs (MHA) and approved by the Union cabinet in 1984. Also included in it are the names of INA stalwarts like Captain Lakshmi Sahgal who has also given a signed statement that Panda did serve with the INA. But 20 years on, this Oriya woman is part of a forgotten army, lost in the files of the freedom fighters' division housed within the walls of the MHA in Delhi.

For Panda, it has been an arduous trek all along. Speaking to Outlook, she said, "The Central government has done nothing for me after all that I have done for the country. Even the state government was giving me only Rs 300 a month as pension. It has now been raised to Rs 700. But I can't manage with that. For me, it's a question of survival. Which is why I have been reduced to washing dishes. I never thought I would end up like this. I never thought our government will treat a freedom-fighter so shabbily. But I am helpless and can only hope that the government grants me my pension." She wonders why her case is not being considered despite being issued a certificate that she served in the INA.

Panda is not the lone example. Independent India has not been too kind to many of those who deserted the British Indian Army and signed up with the INA. Says Capt S. Yadav, general-secretary of the All India INA Committee, which is fighting on behalf of the INA veterans trying to win back their lost dues, "Neither were we accepted back into the army, nor were we recognised and even today the government refuses to accept many of us as INA veterans. For us, proving our contribution to the nation's freedom struggle has always been an uphill task."

While an elaborate criterion was drawn up for conferring the freedom-fighter status, successive governments failed to recognise the issues that were peculiar to INA veterans. Explains Yadav: "Few of us served more than six months' detention after the INA surrendered. But the government insisted that we must serve more than six months imprisonment to qualify as freedom-fighters."

Worse, a majority of the INA veterans refused to go back to the army as the conditions set for them were humiliating at best. "The government declared that they would offer us a de novo commission. Which meant that we could join back in the ranks that we held before we went over to the INA. By this time all my course-mates were Lieutenant Colonels and I did not want to join the army as a Second Lieutenant," remembers M.M. Khurana who joined the Indian Foreign Service after Independence. Records available in Parliamentary archives reveal that only 1,038 out of the nearly 15,000 INA veterans went back to the army on the terms and conditions set by the government.

Among the forgotten heroes is P.K. Mathew, who served with the INA between 1942 and 1945. Now a resident of Chenganoor in Alappuzha district, Kerala, Mathew points to the pile of files on his table—a testimony of his fight to gain recognition as one of the chosen few to serve with the INA.Commissioned into the 7th Guerrilla Regiment, Mathew has served under Colonel Sardara Singh and remembers his stint with pride. Since 1972, he has sent numerous petitions seeking recognition, only to be rejected. "I've been knocking at the doors of the Indian establishment for years. But I'm not going to beg. Netaji taught us to fight till the last. I may not live to see the end of my fight," says Mathew.

An official in the ministry once made a mistake and categorised Mathew as a civilian. Since then, despite the availability of records from the Army Service Corps Records Office, he has not been able to convince them that he was with the INA. Ironically, Mathew, who was taken prisoner by the British in Malaya in 1946, has a letter sent to him by the Records Office of the ASC which clearly spells out that he was with the INA. Points out the doughty 85-year-old: "Now, my only prayer is, do not tantalise me with the pension that's due to me as a matter of right. But please dispose of the case, ruling once and for all whether I had served the INA and my country. I don't want anything else."

Another veteran who has gone unrecognised is Krishna Nair, a resident of Udupi district, Karnataka. This despite Union minister for statistics and programme implementation Oscar Fernandes recommending his case. In a letter dated May 10, 2005, Fernandes wrote to Union home minister Shivraj Patil requesting him to expedite his case. But that didn't help. Many years ago, Nair had sent his original movement order issued by the British—his sole proof that he was a prisoner of war—by registered post to the freedom fighter's division. Since then, his petitions have fallen on deaf ears despite the fact that he still retains his INA pay book. "I spent nearly seven months in detention after the INA surrendered to the British. I sent the original movement order to the MHA and I also have an acknowledgement that they received it but now they say they can't locate it in their files," says Nair.

During the course of his petitions, he was also asked for a 'Co-Prisoner Certificate' which could have proved the fact that he was kept under detention. However, there is a catch. "Only a person who has served for a year in detention under the British can issue such a certificate. However, there aren't any INA veterans who served a year in prison, so it is impossible for any one of them issuing such a certificate," says Capt Yadav.

As he prepares to continue his fight into another day, Yadav knows he and other veterans have a tough road ahead. With failing health and poor eyesight, these brave soldiers, who put patriotism before everything else, can only hope that they are not denied their just dues. For many though, hope itself has dried up.