Ek, do, teen...fans are readying the posies for Madhuri's return in Aaja Nachle 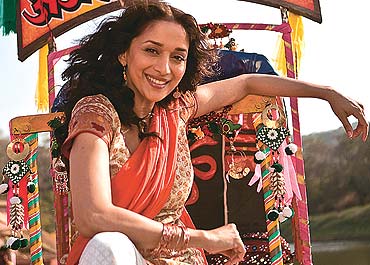 outlookindia.com
-0001-11-30T00:00:00+0553
"Why did she ever go away?" It's a typical lament of Madhuri Dixit fans, those who avidly feasted on her movies in the late '80s and '90s, and have never quite forgotten her, even after her five-year-long absence from Bollywood. Memories of her 1,000-megawatt smile, her amazing grace, and her incredible dancing ability made her the ultimate Dream Girl for an entire generation of filmgoers. She even inspired M.F. Hussain to dedicate an entire film—Gajagamini—to her beauty. And all these fans are now waiting eagerly to have her dance her way into their hearts again, with Aaja Nachle.

Madhuri was last seen as the beautifully affected Chandramukhi in Sanjay Leela Bhansali's Devdas. But the girl who hit the high notes of stardom with Ek Do Teen in Tezaab and Hum Aapke Hain Koun, had begun drifting away from Bollywood much earlier. Like a good, middle-class, studious Maharashtrian Brahmin girl, Madhuri wanted to be a microbiologist, but fate took her to Bollywood instead, and she gave it her all. She managed to maintain a wholesome image in the industry, a dalliance with Sanjay Dutt notwithstanding. For close to a decade she was also the unchallenged occupant of the Heroine Number 1 slot. Then she just as easily gave up a thriving career and opted to "settle down" at the "right age". Like many other actresses before her—Mumtaz and Meenakshi Seshadri for instance—she chose a life of domesticity in Denver, Colorado, with her surgeon husband Sriram Nene and two sons.

Madhuri comes back to Bollywood at an interesting juncture, when it's totally devoid of a legitimate Queen Bee. There is no mega heroine in sight. The only other actress who could have succeeded Madhuri as Number 1 was Kajol. Rani Mukherjee did have a brief stint as the pre-eminent diva in the wake of hits like Black and Hum Tum, but she's had a lacklustre spell thereafter. Aishwarya Rai's icy beauty hasn't quite captured fans' hearts and she has failed to deliver successes at the box office. And the likes of Juhi Chawla, Preity Zinta, Priyanka Chopra and Kareena Kapoor have never been serious singular contenders for the top star slot. No wonder, expectations from Aaja Nachle. and Madhuri are huge, especially because it has Madhuri doing what she is best at—dance.

Lots of films have showcased Madhuri as the diva of dance. But, as she puts it, "This is the first time that I have got an opportunity to do an entirely dance-based film, to do all my favourite dances". The choreographer, Vaibhavi Merchant, has got the spirit and the mood of the film just right, she adds. Madhuri sees parallels in her own life with her Aaja Nachle character, Dia. "She is a New York-based dancer. And despite family responsibilities, my commitment to dance is as deep and abiding." She still practises for about an hour every day.

Ironically, however, her biggest strength also got Madhuri typecast. Her bosom-heaving dhak-dhak, choli ke peeche kya hai routines may have sent the audience pulse racing, but they also prevented Madhuri from exploring her potential as an actress. She remained an object of male fantasies, with very few creditable dramatic performances on her resume, save perhaps in Mrityudand or Prem Pratigya. In fact, younger actresses like Tabu were far more successful in resisting the pull of the box office to build a more laudable body of work.

Aaja Nachle may just set that right. It's a film where the 42-year-old Madhuri plays her age, and her character is said to have depth and maturity. There is more to the film than just dance. Like Swades, in this film also the NRI returns to the roots to set things in order. In Aaja Nachle, Dia returns from New York to her hometown Shamli after a long time. After her guru's death, she has to revive the local theatre, Ajanta, save it from real estate developers, and help the ragtag bunch of local people reconnect with dance.

The plot and premise of the film might sound promising, but the going would not be all that easy for Madhuri. She comes back at a time when the younger generation of viewers have found newer icons, like Deepika Padukone and Sonam Kapoor, and don't have any sentimental or nostalgic memories of Madhuri. But then Madhuri is not back for keeps. She will come back to Bollywood only when she wants to, when a good role attracts her enough to tear her away from her family, and her life as a suburban housewife in the US. Perhaps, after all, she's found the right way to keep alive her Bollywood star mystique, now that she can't be Heroine No. 1 anymore.

A Bad Seed In The Bag