India has had nine wicketkeepers in the last seven years. Why are we so stumped over this key position? 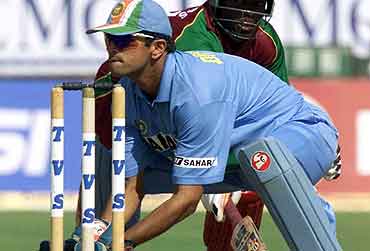 outlookindia.com
-0001-11-30T00:00:00+0553
Tiny Parthiv Patel’s ‘kid glovework’ was probably one reason why India couldn’t win the Test series Down Under after coming agonisingly close. The Aussie tour was a litmus test for the cub keeper, who would have been hailed as a hero if he’d kept even reasonably well. But he kept fumbling and dropping straight catches and missing regulation stumpings with alarming regularity through the four Tests.

A wicketkeeper with butter fingers is a bad advertisement for a side already at a disadvantage because of injuries to its leading bowlers. Rather than giving confidence to the bowlers, Parthiv’s rather timid presence behind the wickets often demoralises them. "How can you expect a keeper who isn’t confident of his own ability to lift the morale of his bowlers? Of course, there are certain flaws in his wicketkeeping, but I think Parthiv’s major problem lies in the mind, not in technique," says former India stumper Surinder Khanna.

"Parthiv can’t reach lifting deliveries. Nor does he react quickly enough to edges or stumping chances. He isn’t good enough yet," feels cricket writer Peter Roebuck. Former BCCI secretary Jaywant Lele thinks on the same lines: "Parthiv has potential but he isn’t a good keeper today. Yet, he is playing for the country. Let him play five Ranji seasons, prove his ability."

The gamble of playing Dravid as an ODI stumper so as to make room for an extra batsman/bowler hasn’t paid off extravagantly either if you see it in strictly wicketkeeping terms—though it may have helped indirectly by lending a lean, lo-cal balance to the team (see bottom box). Finally, it’s a dicey tradeoff. What you gain on one side, you could lose in some fumbles behind the wicket at crucial moments. But you can’t really blame Dravid every time he muffs up a lolly. Team India has thrust the extra onus on him.

Hence, selection committee chairman Syed Kirmani’s assurance on picking a specialist keeper for the shorter version of the game too. It’s a pity that despite having two international keepers (Kirmani and Kiran More) on the selection panel, India’s eternal quest for a reliable, regular keeper who can also bat decently continues. And to think India has experimented with as many as nine wicketkeepers (including Dravid) since 1999.

Eight of them wouldn’t have kept for India in the first place if Nayan Mongia hadn’t fallen foul of the selectors for some curious, mysterious reason. And except for Ajay Ratra, none has approached Mongia’s quality behind the stumps.

M.S.K. Prasad was thoroughly exposed in all the three Tests Down Under in 1999-2000, both with gloves as well as bat, and hasn’t played for the country since. He had earlier figured in three Tests against the Kiwis at home too without impressing. Saba Karim, a better batsman than keeper who made several tours with the Indian team, played just one Test against Bangladesh at Dhaka in 1999-2000, though he did figure in 34 ODIs with moderate success. He subsequently injured his right eye, which hastened his retirement.

Vijay Dahiya played two Tests against Zimbabwe in India in 2000-01 without making any special impact with his glovework. Nor in the 19 ODIs, save a couple of breezy little knocks. Deep Dasgupta had a pretty good series with the bat in South Africa in 2001-02 where his hundred as an opener helped India save the second Test. But his keeping has had cricket fans howling alternately with mirth and rage.

It’s a sad commentary on Indian cricket that quality keepers like Ratra and Mongia look starved of a chance to show their stuff. The tragedy is that irrespective of being regarded as the best keeper in Asia today, the selectors have slammed the door on Mongia’s face for no fault of his. Indeed, Lele has even openly accused More of making sure Mongia doesn’t don national colours again.

Though Ratra may have been the best bet for the Australia tour, as a safe if not spectacular keeper and a dependable batsman, having scored a Test hundred in the Windies, the five wise men retained Patel, and brought back Dasgupta as the team’s second keeper. "The selection of two wrong keepers on a long and difficult tour of Australia was bound to boomerang on a team already crippled by a substandard bowling attack," says a BCCI insider.

It’s about time the Indian selectors woke from their slumber, made amends and picked a genuinely gifted keeper who is confident of his own capabilities and who can inject confidence in his bowlers by his mere presence behind the stumps.

Considering that there’ll be many things at stake in Pakistan, it wouldn’t be a bad idea to recall Mongia or Ratra. Or both. They’re fit as a fiddle and in good form, too, with gloves as well as bat. Besides their laudable work behind the stumps, their batting may lend solidity to the Indian line-up, particularly in a crisis. This is Messrs Kirmani and company’s best opportunity to right a wrong.