The Marans have always picked on Stalin 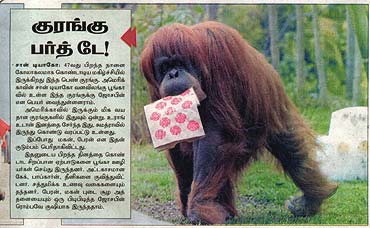 After all, two months before, on March 1, Dinakaran had carried an impish news item with the headline A Monkey's Birthday on the day of Stalin's 55th birthday. The implication was that Stalin—a grandfather now despite continuing to head the DMK's youth wing—shared his birthday with a chimpanzee in a San Diego zoo, which too had grandchildren. Ironically, in the same edition the DMK cadre had issued half a dozen advertisements praising Stalin. Sun's newspapers and TV channels regularly got a lot of government and party ads, but were selective in paying back the compliment. Dayanidhi became for the Sun TV group what Rajiv Gandhi was for 1980s Doordarshan. Stalin and Kanimozhi were simply eclipsed. Some of the noted 'blackouts' effected recently by Sun TV are the non-reporting of the launch of Karuthu, a platform for freedom of expression launched by Kanimozhi in association with Karti P. Chidambaram (Union finance minister's son); the week-long folk arts festival that Kanimozhi organised two months ago also found no mention the bulletins.

Professional reportage has hardly been the Sun group's forte. While it would splash images of Bill Gates with a beaming Dayanidhi, it would black out politicians even from friendly parties. Stalin's programmes would be downplayed or only reported if Karunanidhi was also present. What irked many in the DMK was that they saw the Sun network as a party channel. Till Murasoli Maran was alive that was happening. But of late the channel had become selective in its news content.