Hear Them Skeletons In The Bureau?

Was it just in the line of duty or did the IB in Gujarat overreach its mandated brief? 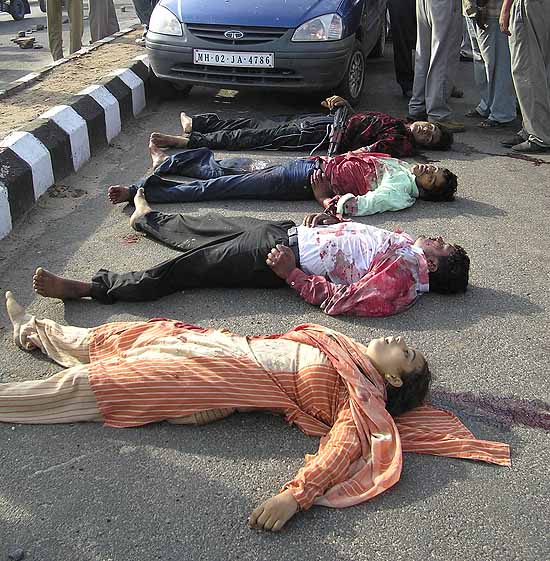 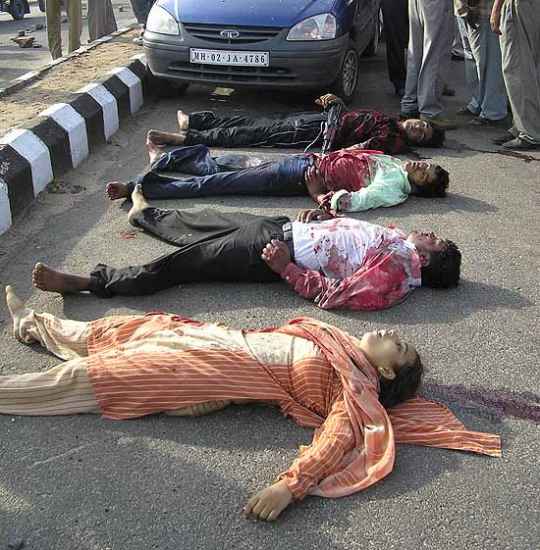 As much as Gujarat chief minister Narendra Modi and his right-hand man Amit Shah, India’s shadowy internal spy agency is feeling the heat following the CBI’s chargesheet in the 2004 Ishrat Jahan fake encounter case. For the politicians, the fat will be in the fire only if the IB officers choose to squeal.

The world’s oldest intelligence agency is neck-deep in the quagmire. For the first time, the Intelligence Bureau (IB) stands formally accused of criminal conspiracy, abduction, planting of evidence and, worse, plain, cold-blooded murder. Whether the charges remain confined to a small group of individual officers, who will then stand trial in their individual capacity, or whether it snowballs into a scandal involving IB as an institution, will become clearer in the coming weeks and following the supplementary chargesheet that the CBI has undertaken to file on July 26 in the case.

The IB, which was set up by the colonial-era regime in 1887, has so far stonewalled the CBI investigation and refused to share information with the investigators. On the only occasion when one of its seniormost officers, Rajinder Kumar, special director (IB), was questioned by the CBI in June 2013, he reportedly claimed that his job ended when he shared the “input” (that “terrorists” were travelling to Ahmedabad to assassinate the Gujarat chief minister) with the police. Period. He did not remember the finer details.

What the CBI claims to have is evidence that Javed Sheikh was in touch with IB, particularly with Kumar.

The preliminary chargesheet, however, names Kumar as the person who ordered the abduction of Ishrat Jahan and Javed Sheikh. It also says that they were picked up by his men, and he himself interrogated the four alleged terrorists in the custody of Gujarat police and subsequently took an active part in staging the fake encounter and helping the state police plant firearms on the dead bodies. The chargesheet also names three other IB officials. The CBI is clearly anxious to arrest them for “custodial interrogation” but has refrained from making a public pitch.

As it stands, he’s at one remove from being an accused. “Evidence against Kumar is fabricated,” a former IB dire­ctor told Outlook, fuming. Why would he get involved in a fake encounter, what would he have to gain? Speaking on condition of anonymity, the former dib hinted that spy agencies are forced to carry out unpleasant duties in the line of duty. “Strictly speaking,” he went on to add, “everything the IB does is illegal.”

Arvind Verma, a former IPS officer now teaching in Indiana University, US, told Outlook, “IB has a well-structured process of documenting every bit of information and keeping full records of every transaction.” But it is not willing to cooperate with the CBI or allowing it access to records dating back to 2004 and pertaining to the encounter. Which is why the CBI is wary of naming the IB officials among the accused.

What the CBI does claim to have is evidence to show that one of the alleged terrorists, Pranesh Pillai, alias Javed Sheikh, was actually in touch with the IB and, more pertinently, with Rajinder Kumar long before he was abducted and gunned down. The agency, which claims the IB asked Javed Sheikh to reach Ahmedabad, suspects he was an informer. It also has credible information that Sheikh was the “handler” for the other two “terrorists” gunned down with him. 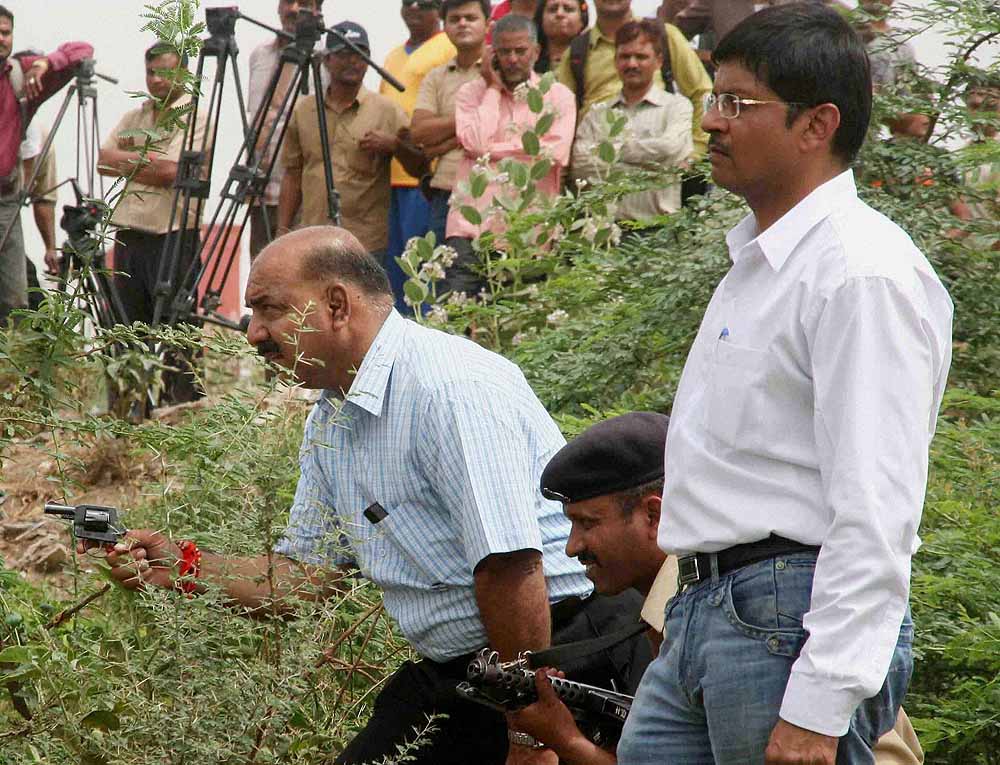 July 7, 2011: Police officers Tarun Barot (holding revolver) and G.L. Singhal (right) during a reconstruction of the Ishrat Jahan encounter by the SIT. (Photograph by PTI)

In short, the three alleged terrorists were agents or double agents.

Why then would the IB decide to eliminate them? Once again, there is no easy answer although sources close to the investigators speculate that it is possible that their cover was blown and they were no longer useful to the IB. But still, why kill them?

This is the point where Rajinder Kumar’s role gets even more intriguing. The IB official, says former Gujarat ADGP (intelligence) R.B. Sreekumar, became friendly with Narendra Modi when the latter was a BJP general secretary and Kumar was overseeing IB operations in Punjab, Haryana and Himachal Pradesh. Sreekumar told a TV interviewer that the then home minister, L.K. Advani, got Kumar posted to Ahmedabad following Modi’s request. “That Kumar was close to the chief minister was not exactly a state secret here and people still remember the warm send-off Modi gave him in 2005.” The insinuation is that Kumar allowed the Gujarat police to stage the encounter to claim credit for foiling a terror attack and the CM to make some political capital.

But did Kumar have a personal agenda? “If it is proved that he was physically present at the scene during the encounter, his liability will be that of a private citizen,” says a former CBI director. Any decision to prosecute him or not will depend on whether the agency has such evidence, he felt.

“What is dangerous is there are elements in bureaucracy, police etc, with their own vision of India at variance with the Constitution.”
Vrinda Grover, Lawyer for Ishrat’s mother

Moreover, he added, the IB at best furnishes information and “nothing more”. It is for the state police to act on it (or not) after verifying the IB inputs. “As far as I know, an IB officer cannot be chargesheeted for providing wrong/false information. Since the IB is not a legal entity, an officer working for it cannot be hauled up for catering incorrect or false information,” he asserts. The onus, it would seem, was on the Gujarat police to verify the inputs.

A glaring discrepancy is that the FIR after the June 15, 2004, encounter says that the then Joint Police Commissioner P.P. Pandey had received intelligence from his “personal” and “private” sources about terrorists proceeding in a blue Indica to Ahmedabad, a claim he reiterated when a PUCL team called on him. “Intelligence,” he told them, need not always come from “official sources”. The claim opens up the possibility that the fact or fiction of an IB input was generated as an afterthought.

The CBI’s contention in the preliminary chargesheet that Rajinder Kumar knew that the four alleged terrorists were alive and in the custody of the Gujarat police and that he had interrogated them raises yet another question. Did he send a report of his interrogation to the IB headquarters? If he did not, which appears to be the case, then it would mean that he was acting on his own. On the other hand, if he did interrogate the alleged terrorists “officially” and recorded it, he would have known that the encounter, touted as a ‘spontaneous’ field event, was fake.

Whatever be the final outcome, the controversy has served to highlight the fact that the IB does not work under any statute or legal framework. While the government describes it as a civilian organisation, it is manned largely by police officers and acts somewhat as a police organisation. In the absence of any statute, the IB is open to abuse, as the Shah Commission of inquiry had emphasised when it was appointed to look into Emergency excesses in 1977. The commission’s recommendations, however, have never been acted upon by successive governments.

A PIL questioning the legally grey status of the IB is also pending before the Karnataka High Court. Filed by former IB officer R.N. Kulkarni, it observes that the finest intelligence agencies in the world operate in secrecy, but within a legal framework. It asks: if other countries, including the United States, can have statutes guiding their agencies, why can’t India?

“The chargesheet hides more than it reveals. Political pressures have been at work and the masterminds have been left alone.”
Mukul Sinha, Lawyer for Javed Sheikh’s father

The PIL also questions the use of secret funds by the IB. It alleges that IB has at its disposal sums running up to `100 crore under secret funds, which amount was being put to ‘bizarre’ uses.

The case has been dragging in the court for the past two years, with the next hearing due in August.

However, in May this year, the Union of India filed an affidavit to claim that the IB’s operations as a wing of the MHA was constitutional because its budget is voted by Parliament; its expenditure, barring the secret funds, is audited; and there is already an oversight committee, which includes the leader of the opposition and which meets once every three months to review the working of the IB.

The CBI has been under pressure to leave the IB alone. But the agency is believed to have told the MHA that it would not be possible for it to gloss over the evidence it already has on record, especially in a case monitored by the judiciary. Agency insiders admit there was enormous pressure on them to let Kumar off the hook. But in the face of media frenzy, selective leaks and the close watch kept by the court, a quiet burial, they hinted, was unlikely.

While the present IB director, Asif Ibrahim, and the outgoing home secretary, R.K. Singh, did try to broker peace between the two agencies, it came to nothing. The two agencies admit to ‘bad blood’ between them and blame each other for the current impasse.

The IB, say its apologists, works on trust and in national interest and it would demoralise the cadre if they were hounded for generating intelligence. The CBI sympathisers scoff at such claims and question whether the IB can ride roughshod over due process and take the law into its own hands in the name of statecraft and national security. The duel rages on, with neither opponent willing to back off. 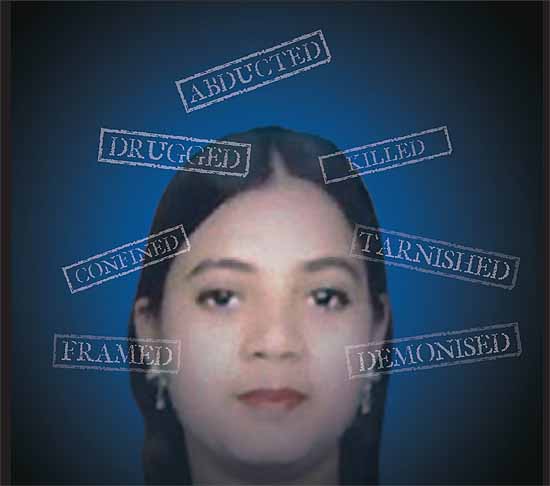 Why The BJP Defence Does Not Wash

While BJP questions CBI credibility and has put up a brave face to defend the Ishrat Jahan encounter, there are many questions for which it has no answers

BJP cites David Headley telling FBI that she was a suicide bomber
In reply to an RTI query from NCP leader Rauf Lala, National Investigation Agency (NIA) said David Headley had made no mention of Ishrat Jahan to them.

BJP maintains that the encounter was genuine and that the accused are innocent till found guilty by court
The party’s stand is at variance with its position on fake encounters in other states where it has demanded the resignation of chief ministers. It is also questioning the findings of the CBI, SIT and a judicial magistrate.

BJP denies the encounter was fake. Gujarat police, it holds, acted on inputs given by IB under a UPA government.
It is hard put to explain why an ADGP rank officer is absconding, why another IPS officer, G.L. Singhal, has  virtually turned approver, and why 12 policemen implicated superiors for the fake encounter

BJP says with CBI holding it a joint operation of the IB and the police, MHA needs to explain what happened.
The MHA and IB have taken the stand that the latter had passed on the input to the state police and the encounter was carried out by the latter with rogue elements within the IB.

By Uttam Sengupta in Delhi and R.K. Misra in Gandhinagar