Has Anyone Seen The Timer? 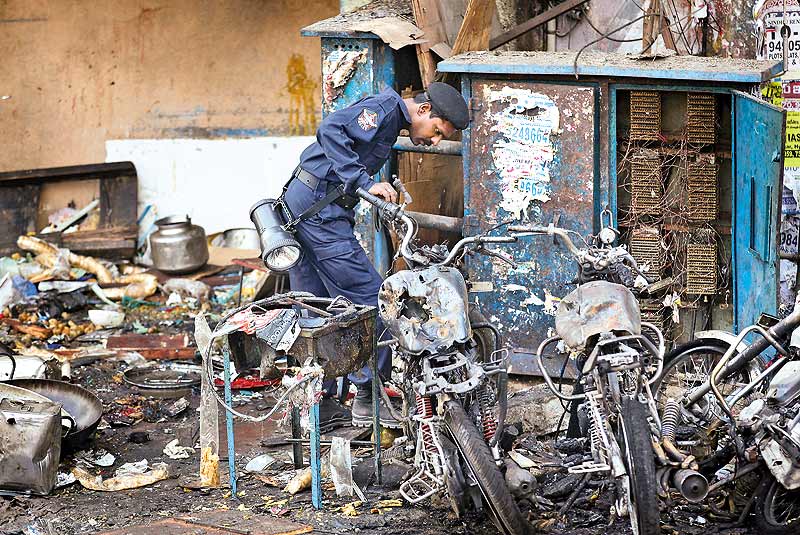 It’s been over a week since the latest terror wave lashed Hyderabad but scores of people still keep amassing at the barricaded blast site in Dilsukhnagar near Konark theatre. Most take pictures on their mobiles, while many amateur investigators among them strain their necks to spot clues. Molten wax from candles lit for vigils covers the iron railings. For many in this city, there’s a sense of deja vu. Days they had hoped they had left behind have come back to revisit them.

Mohammed Rayeesuddin, 32, who’s been living with a constant terror tag hanging around his neck, is a perfect example. Arrested after the Mecca Masjid blasts in May ’07 and acquitted two years later, he was picked up again for questioning after the twin blasts in Dilsukhnagar on February 21. “I was given a good conduct certificate and compensation by the government. But we are now forced to undergo the trauma again,” he says. Rayeesuddin, who runs an electrical shop, was picked up on February 24 morning and taken to the Osmania University station and int­errogated till 6 pm. “The same questions again. Do you know who cau­sed the blasts? Who are you talking to these days? Are you up to any mischief?”

Not just those summarily put under the scanner, even the investigating agencies find themselves beating around on a path they have trodden earlier and with no definite leads. As several agencies—the NIA, CID, OCTOPUS, Counter Intelli­ge­nce, Task Force, local police, ATS, Kar­­nataka and Maharashtra police—join the hunt for terror clues, so far only a sketchy picture has emerged. Off­icials say visible clues like the IED composition, its placement, the timing between the two explosions, the possible use of a cycle—point to a modus operandi similar to Indian Mujahideen-executed attacks. The latest att­acks are also similar to the twin blasts at Lumbini Park and Gokul Chat Bhan­dar in the city in 2007 as well as last year’s Pune blasts. The 7 pm timing too is the same. But these may just be straws in the wind the authorities are clutching at.

“There are no leads. What’s being dished out is just already known facts about IM and the Bhatkal brothers,” says retired IPS officer and SPG founder S. Subra­m­anian. Handed over the Hyd­erabad case almost immediately, the National Investigation Age­ncy (NIA) is banking on the interrogation of all­e­ged IM operatives already behind bars to throw up leads. It’s also sought the custody of IM operatives Syed Maqbool and Imran Khan, arrested in connection with the 2012 Pune blasts. 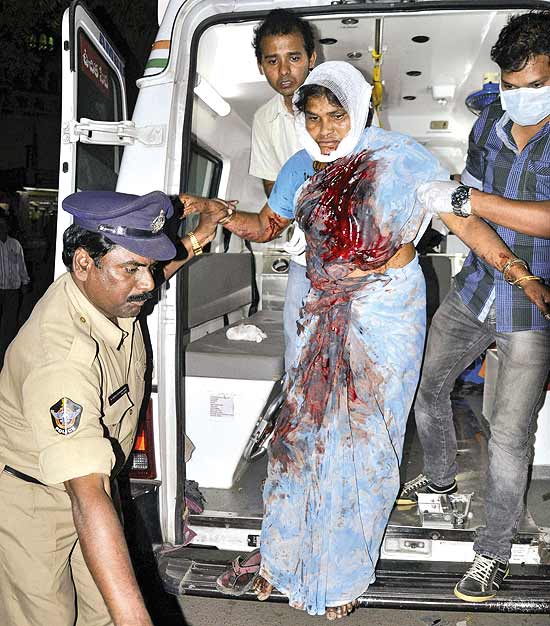 Injured woman being taken to hospital

Maqbool had reportedly told the Delhi police in October ’12 that the IM had conducted a recce of Dilsu­khnagar and Begum Bazaar areas. The Pune blast sus­pects are IM leaders and brothers Riyaz and Yasin Bhatkal, and Waqas, Tabrez and Raju bhaiyya alias Akhtar. Several youths in Hyderabad have been picked up for questioning but so far no arrests have been made nor have the police been able to establish any local links. Grainy CCTV footage revealing two possible suspects, one on cycle and ano­ther on foot, has been sent to Mumbai.

Struggling to cope with the several terror cases on its table (and with the skeletal staff on hand), the NIA has its task cut out. “When investigators want to hit back, they hit back hard with solid investigations. But NIA needs to build on its strengths of terror investigations,” says ex-IB head Ajit Doval. Not particularly easy when one isn’t even sure which side the latest attacks were perpetrated by. “Frankly speaking, the modus operandi of Islamist fundamentalists and right-wing Hind­u­tva extremists has blurred. It could have been done by anyone,” says an intelligence official. State investigating officers are still betting on IM as the prime suspect, but admit it could have been any other outfit—LeT, HuJI, JeM, or homegrown outfits like Dar­s­gah Jehad-o-Shahadat or even Deendar Anju­man. “Terror groups work with each other and operate just as our intel agencies do,” adds an officer wearily.

Meanwhile, for Union home minister Sushilkumar Shinde, these are the second serial blasts on his watch. Talking just hours after it, Shinde was defensive in his reactions. “After two executions (Ajmal Kasab and Afzal Guru), some reactions had to come. We were expecting it. We were sending general alerts throughout the country.” The first war­ning, on Febr­u­ary 16, raised the prospect of terror strikes as retaliation against the hanging of Guru. The second, issued on February 18, noted that terrorists were likely to hit areas where reconnai­ssance or strikes had earlier taken place. The third, on February 19, listed possible targets (Dilsukhnagar was not on it) where arrested terrorists had conduc­ted reconnaissance. The alerts had no information on possible perpetrators. Doval counters Shinde’s stand saying, “In the world of intelligence-gathering, inputs or alerts are valuable only if they lead to an action or prevention. If the government failed to act despite claiming to have had the knowledge, then Shinde needs to be held accountable.” 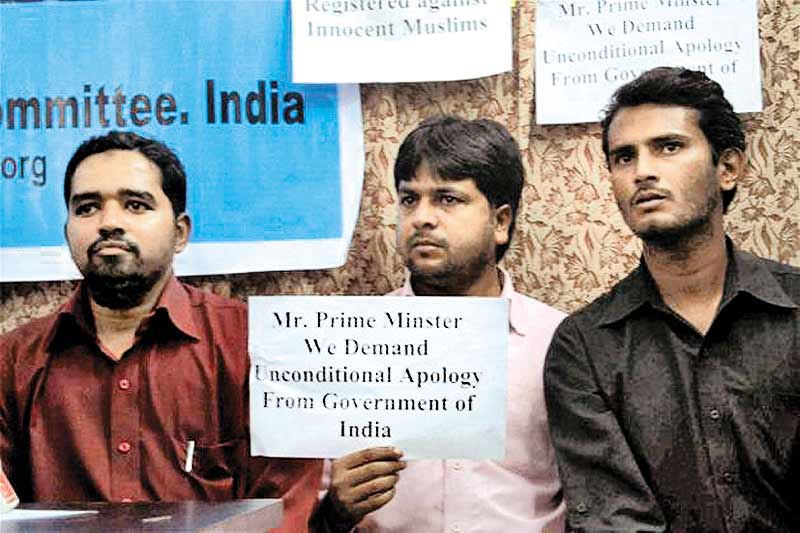 Rayeesuddin and others who were again arrested

Dilsukhnagar, located on the Vijaya­wada highway, is a commercial and educational hub, a “mini-Andhra” if you will. Real estate developers from coastal Andhra districts have invested in the area, turning it into a bustling trading hub. Educational institutes, IT training centres and coaching institutes are abundant here. As are small-time cloth merchants, fruit and flower vendors and rythu (farmers’) bazaars.

One bomb went off near the bus stop between Konark and Venkatadri theatres, close to a famous Sai Baba temple. February 21 was a Thursday, an especially busy day. In fact, Hyderabad police commissioner Anurag Sharma was at the temple and had left at 6.30 pm, just 30 minutes before the blasts occurred. While Sharma claims it was a personal visit, the rumour-mongering hasn’t stopped. Did he receive a spec­ific alert, was he there checking sec­­­urity arrangements? Did the security for Sharma force the terrorists to move the bomb from the temple to the bus stop?

The speculation comes in a city whose citizens have grown to suspect those from the old city. So much so even someone like Subramanian says there ought to be an “exclusive special intelligence branch” for the old city and another one for the new city. Former vigilance D-G C. Anjaneya Reddy says the anonymity of the old city has led Hyderabad to become a shelter for terror. “Illegal migrants from Bangladesh, Pakistan, PoK, they come and blend in. They come without papers and stay on.” These “illegal aliens”, as Reddy terms them, become easy recruits for terrorists who exploit their poverty and residential status. “Some people in the old city may have sheltered terrorists in their houses without even knowing they are doing so,” says M.V. Krishna Rao, former SSB chief who also served as Hyderabad police commissioner.

Apart from their non-controversial profiles, movements from one city to another or one state to another renders operatives untraceable. “No group uses locals for the actual crime. Indoc­tri­na­tion happens in one state, the boys are sent on jobs to some other state,” says Maharashtra ATS head Rakesh Maria. “Unlike in the underworld, these operatives are white collar with no criminal records, educated and very religious. They don’t go to beer bars or prostitutes. Even in the mosques, they maintain a low profile. Traditional informant networks may not suffice here,” he adds.

Meanwhile, all the peace marches and candle-light vigils have offered little succour to the families of the dead and those of over 100 others battling injuries. Seething locals fear the slew of high-profile political visitors with their retinues may have even trampled on vital evidence. Insensitive statem­e­nts by politicians haven’t helped either. pcc chief Botsa Satyanarayana had sta­ted that “minor incidents like this do happen”. Cut to Union minister Ghulam Nabi Azad, with his two pennies’ worth that “such attacks were common” in his home state.

The blasts have also renewed talk of ramming through the National Counter Terrorism Centre, something most sta­tes have opposed till now fearing enc­r­oachment on their jurisdiction. While its powers are being redrafted to accommodate state concerns, ser­v­ing IB officers argue that the gove­r­nment ought to fix the existing system rather than create a competing one. Hyde­ra­b­ad’s policing too has been a victim of politics—it has seen nine dgps in the last 11 years, one succeeding the other after some controversy. The Telangana mov­ement, the Jaganmohan Reddy factor, infighting within the Congress have kept the state intelligence busy with political work. “When politics is in disorder, terrorists have a natural breeding ground,” says Subramanian. The police are now suggesting that malls, cinema houses and even small-time traders instal CCTVs to ward off the terror threat. As usual, it is up to the citizens of Hyderabad to protect themselves.