Harsh In His Judgement

Overly critical of the apex court, Shourie fails to see its redeeming aspects 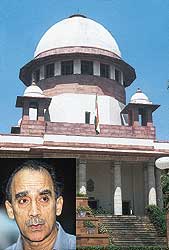 Courts And Their Judgments
By Arun Shourie
Rupa Pages:462; Rs 495
Some years ago I had a phone call from Arun Shourie: "Soli, may I use your law library for some articles I am writing about some Supreme Court judgements." I readily agreed. Shourie made full use of the reports.

Industry, research and thoroughness have been Shourie's hallmark. And Courts and Their Judgments amply reflects this. It is rare to find a journalist with such extensive knowledge of law and judicial decisions. The uninformed may conclude that he is a trained lawyer.

On the whole, Shourie is critical of the judgements of the apex court and its functioning. Several passages from its judgements are cited to establish inconsistency. Shourie perceives inconsistencies in some cases where there are distinguishing features. That apart, which apex court in any country has been consistent throughout? Judges are not vouchsafed the divine gift of infallibility. Our Supreme Court has on occasion reversed its previous judgements rather than obstinately refuse to acknowledge its errors. Thank providence that our Supreme Court does not overrule its decisions with the same speed and alacrity as the US Supreme Court did in the past.

A great contribution of our highest court has been to deduce from enumerated guarantees of fundamental rights others not specifically guaranteed. This has led to enlargement of the scope of fundamental rights. Freedom of the press and freedom of information which are not expressly mentioned in our Constitution have been deduced from the free speech guarantee. Surely, Shourie can have no objection to this innovative judicial exercise. Consistency demands that he not disapprove of similar judicial exercises performed in the case of the right to travel abroad, the right to privacy, the right to education and other basic human rights spelt out by our Supreme Court. Similar judicial exercise has been performed in the US and in Ireland.

Shourie is critical about the interpretation placed by the Supreme Court on the expression 'life' in Article 21 of the Constitution. Unfortunately, he overlooks the substantial benefits of this creative judicial interpretation in the battle against pollution and preservation of our environment.

Expansive interpretation of the expression 'State' in Article 12 of the Constitution has brought within the discipline of fundamental rights many corporations and other bodies, which exercise quasi-governmental functions and whose activities have public dimensions and repercussions on the community. Consequently their employees can claim the protection of fundamental rights, especially the guarantee against discrimination on the basis of caste and gender. Sadly, Shourie disapproves of "this swelling ambit of Article 12". Shourie's criticism of judgements which have led to the backdoor entry of 'due process clause' in our Constitution, although that move was rejected by the founding fathers, is well taken. But again he has ignored the tremendous benefits that have thereby accrued to undertrial prisoners languishing in jails for inordinately long periods, inmates of so-called care homes and asylums, prisoners, children employed in hazardous occupations and other downtrodden segments of society.

Shourie is right in his critique of the judicial trend of lightly entertaining public interest litigation (pil) concerning fiscal and economic policies. No one advocates exclusion of judicial review. However, it is necessary to emphasise the need for judicial self-restraint in these matters, especially regarding the grant of interim reliefs which may hold up projects of national interest for years. Judges must ensure that pils do not degenerate into publicity, political or personal interest litigation. Nor can every matter of public interest be the subject of a pil.

Criticism levelled at judicial activism overlooks one important fact. When the court is apprised of grave derelictions of statutory duties and constitutional obligations which result in violation of fundamental rights, it cannot procrastinate nor prevaricate. It must respond. True, some judicial orders passed in pils do more credit to the heart than to the head. True, some orders passed without realising the grave financial implications and the impact on budgetary allocations are beyond the judicial sphere. But on the whole, judicial activism via pils has made some fundamental rights living realities for some disadvantaged and the exploited sections of our society.

Shourie has rightly deplored the functioning of the legal profession, citing some telling instances. One cannot but agree with his admonition that lawyers "need to re-examine the premises on which they operate. Every profession has developed such self-serving, convenient principles". His call for an ethical audit for the professionals is timely.

It is difficult to agree with some of Shourie's views and conclusions but no one can doubt the force of his convictions. The book is bound to arouse controversy. Hopefully it should lead to honest introspection in judges, lawyers, ministers, bureaucrats and members of the public concerned with the administration of justice. Therein lies the real merit of a book written with passion and sincerity.