There's something about Harry. The global phenomenon washes up on Indian shores, with that magical hold over children. 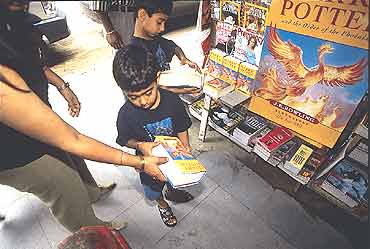 So Mumbai schoolgirl Zara Ahmed, 15, Potter faithful and earnest muggle, woke up at the crack of dawn on June 21 to join an early morning bookstore queue for Harry Potter and the Order of the Phoenix. It is the boy wonder’s fifth adventure, a quarter of million words long, 766-pages thick and coming three years after his last escapade. By mid-day, Zara had devoured half of the book. "I couldn’t imagine not buying it," she says.

Neither could thousands of other kids and their parents, all swept up in the kind of mania India has never witnessed before. Penguin, distributor for Potter books in India, had "played safe", as a company executive confesses, by ordering 60,000 copies—almost double the amount the trade had ordered in May. By the middle of last week, traders were howling for more, and another 60,000 copies were ordered. Now, Penguin is looking at some 2,00,000 copies of the new hardback flying off the bookshelves, and half a dozen websites hawking it, in a month or so—easily the fastest selling book ever in India. (This for a children’s book that costs Rs 795.) Compare this with the 5,000-copy initial orders and sales of 30,000 copies in six months for the last Potter book, 2000’s Harry Potter and the Goblet of Fire, and you get the picture.