A Bhansali-Sony Pictures duet. The harbinger of bigger budgets and profits, or sign of a future brain drain? 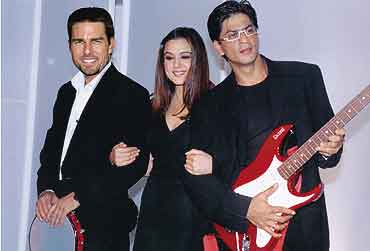 outlookindia.com
-0001-11-30T00:00:00+0553
Two superpowers signed a unique treaty last week and the harbinger of this unprecedented accord was none other than the maverick filmmaker, Sanjay Leela Bhansali. Sony Pictures Entertainment (SPE) announced its first-ever Indian co-production, in partnership with Bhansali—a love story called Saawariya (Beloved). The announcement is significant in that it's the first time a leading Hollywood studio has decided to pump money into its Asian counterpart, Bollywood. "This is a defining moment for us as a company and for filmmakers, artistes and audiences in India," says Michael Lynton, chairman and CEO of SPE.

So is Big Brother Hollywood acknowledging the business might of the smaller cousin Bollywood, the only film industry in the world to have withstood its domination? Gareth Wigan, vice-chairman, Columbia Tristar Motion Picture Group, the umbrella organisation for SPE, refuses to be drawn into any power game. "We greatly respect the Indian film industry and want to work closely with one another in actively promoting Indian films and allowing the talent to interact with one another," he says. "India has a rich and prolific film history and we recognise the potential and importance of the Indian market," says Lynton.

The idea, on paper, is to integrate the two leading industries so as to open up newer markets and spheres of cooperation. SPE has made similar co-production efforts in China, Brazil, Germany and Mexico as well. China's Oscar winner Crouching Tiger, Hidden Dragon proved to be its most successful deal, having grossed over $200 million till date. Kung Fu Hustle was the other big success story from China with a worldwide gross of $105 million. So, will India be the new cash cow? Sony has been distributing Indian films within the country and the co-production deal is a step ahead in their expansion plans. It is also expected to help Sony and its films gain a better foothold in the Indian market. "If they are here to stay, they have to become a part of our industry," says Delhi distributor Sanjay Mehta. "If it gives us greater domestic presence, we welcome it," says Wigan.

For a long time, there has been talk of Indian cinema going global and crossing over to the West. Shekhar Kapur has been directing foreign film; Om Puri, Aishwarya Rai, Mallika Sherawat and now Sushmita Sen and Salman Khan are acting abroad. India has emerged as the outsourcing hub for post-production work, graphics and animation. In terms of co-productions, French companies like Fond Sud have financed independent ventures like Hazaaron Khwaishen Aisi. Saawariya is expected to consolidate these synergies. Besides providing access to bigger finances, such strategic tie-ups can help Indian filmmakers gain a better presence in foreign markets and open up new sources of revenue. "It can increase the reach and earnings of Indian films, add newer markets and expand audiences," says Wigan. It can also bring in a wider pool of creative personnel and resources. The one area bound to be affected most is film marketing, considering Hollywood studios are known to spend 34 per cent of a film's budget on promotions as opposed to 10 per cent in India.

Though the details of the forthcoming project are yet to be divulged, it's bound to be a multi-crore production. It's also rumoured to be the launch-pad for a new star pair, Ranvir (the son of Rishi and Neetu Kapoor) and Sonam (the daughter of Anil Kapoor). But why pick Bhansali whose opulent melodramas aren't exactly the kind of stuff westerners dig? Sony claims to back Bhansali's vision completely and the film is expected to be an undiluted Bollywood song 'n dance spectacle. "His body of work has been in a class of its own. His films have epitomised sensitivity and embodied visual splendour," says Amy Pascal, vice-chairman of SPE and chairman of Columbia Tristar.

So is it time to uncork the bubbly? Director Sudhir Mishra is guarded. According to him, this move is a sign of a coming creative brain drain, as has happened in the European and British film industries. "The Indian producers are a divided and exploitative lot. So any creative mind is willing to migrate to the West. This co-production will mark the beginning of the end of the Indian producer," he predicts. And the start of another creative order?