The value of this book lies in the first-person accounts of the frustrations and achievements of journalists unearthing facts in hostile circumstances. 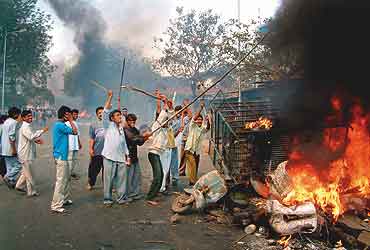 Breaking The Big Story: Great Moments In Indian Journalism
By B.G. Verghese
Penguin Rs 250; Pages: 208
Bhopal, Bofors, Tehelka and Nellie have come to symbolise hard-hitting, well-documented investigatory reportage, but the value of this book lies in the first-person accounts of the frustrations and achievements of journalists unearthing facts in hostile circumstances. Their efforts do not always result in big stories. Muzamil Jalil of The Indian Express, for instance, paints an invaluable picture of the limitations of reporting on Kashmir, and of the dangers of assuming that any one experience, any one version, is the whole truth.

Jalil’s contribution does not focus on any single revelatory event or disclosure. Instead, by describing the variety of interests involved in hiding or distorting facts, he enables us to read between the lines and be cautious in accepting generalised assessments of the troubled situation in Kashmir. The title, Deciphering Silence in Kashmir, encapsulates the message. This does not mean there is no scope for field reporting that illumines significant aspects of life in the Valley. His piece on following the Sufi trail in the Valley may not figure as a news break, but it helped bring out its peace-loving, philosophic heritage and earned him the IFJ Tolerance Prize for South Asia.

The common thread binding the contributions is the value of going out and getting facts rather than rewriting official handouts or quoting unnamed sources. We’d never have known the extent of hunger leading to deaths in Orissa and other drought-ridden areas had journalists not persisted in going to the scene in the face of official disclaimers. The tragedy of thousands of starving men, women and children being forced to eat boiled mango kernel in Kashipur would not have rocked Parliament had NDTV’s Sampad Mahapatra not persisted in exposing facts the CM contradicted.

Raajkumar Keswani of Dainik Bhaskar recalls the frustration of unearthing indications of a brewing disaster without gaining official attention. He found evidence of poisonous gas leaking from the Union Carbide plant in Bhopal well before the disaster. After nine months of research, he published his findings of the harm already done by gas leaks in Rapat, a local paper he brought out. The only effect was to provoke the labour minister to assure the state assembly that he’d seen the foolproof safety arrangements in the plant. Six months before the disaster, Keswani got his story splashed in Jansatta. But again no one in authority took notice. The PR wing of Union Carbide had been looking after local scribes and bureaucrats.

Sanjay Hazarika and Teesta Setalvad fill in the background and point out the lessons from two appalling scenes of mass butchery. He recalls the political hate campaigns that led to the Nellie and accompanying massacres in Assam in February 1983, but with no evidence of official complicity. She, the more recent communal butchery in Gujarat in which authority was involved.

After the powerful exposés by Chitra Subramaniam and Tarun Tejpal, high-level corruption in defence deals could no longer be hidden. Here they provide glimpses of the cover-up and retaliatory tactics of the governments concerned to ensure nobody in power was punished and deter further investigation. Recalling her coverage of the insurgency in Sri Lanka, Anita Pratap recalls the behind-the-scenes figures, including diplomats, who try to mislead media for their own ends. The only contribution that fails to come up to the standard set by the other seven is Pradeep Magazine’s thin piece on match-fixing.