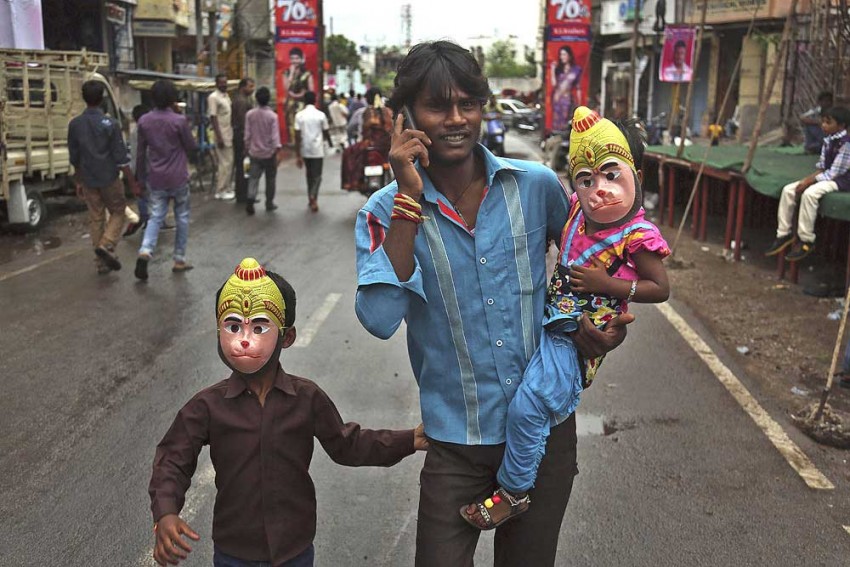 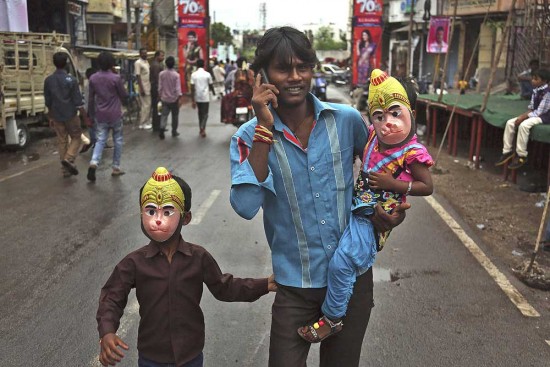 The faded wall-painting in Raipur is for an event management company called Crazy Chaps. Only one part has been repainted, the only bit that matters: the mobile phone number. In a small but telling way, it speaks of the centrality of the mobile phone in India; it is as if almost every aspect of one’s identity can somehow be encapsulated in this tiny device. Everywhere we went on our annual pilgrimage to small-town India, in our attempt to understand how it was embracing change, we found the powerful influence of this sliver of technology. Indeed, there were times when if one were to freeze-frame on a random scene, every single person in it would be doing something with a phone. Mobile phone usage has settled over small-town India like a coating of access, creating intricate new networks of access while also serving as part-rabbit-hole into the self and part ejection hatch into an outside world full of nameless opportunity. The small town reaches beyond itself, and suddenly everything is within grasp.

For many, perhaps the most profound way in which it has changed them begins in the act of owning a mobile phone itself. To get a unique number, and with it the ability to reach anyone with a phone and in turn be reached by anyone gave one an address in the new world. The mobile phone is a giant act of inclusion and an assertion of the significance of the individual as she becomes part of a network of possibilities, a citizen of a new collective. The conferment of identity in a way that could be tangibly experienced has been perhaps the most important contribution made by this increasingly versatile device. Across the country, in so many different ways, the mobile phone is making the individual experience herself as a brighter dot on the map of the world.

The self is being experienced both as being connected to the larger collective as well as being separate from it. The ability to stay connected deepens ties between loved ones even as it allows for greater physical separation. Across the country, the idea of being able, at a relatively modest cost, to stay continually in touch with one’s immediate family and friends is seen as the greatest value provided by the phone. The mobile phone is altering the constraints imposed by geography and migration, and making it possible for many more people to imagine distance as a variable that can be managed. The difference is most significant in the case of young women, many of whom report that their desire to move to another town to study was easier to convert into reality thanks to the mobile phone. The ability to access someone and in turn be accessed in private is something that creates personal possibility and social anxiety.

The ability to stay connected is also making for some interesting new kind of codes in relationships. For a lot of young people, the idea of a private channel of communication that is invisible and continuous creates a new meaning of romance. In many small towns across including the north, where the intermingling of the sexes is actively managed, the mobile phone becomes a vehicle of building and breaking relationships. For boys, the phone encourages risk-taking—try maar lo, kya jaata hai, as one young man put it. The idea of couples is becoming more commonplace, but interestingly, very often this does not necessarily culminate in marriage nor is it intended to. It is conceived of as a device to intensify the enjoyment of youth, before submitting to the responsibilities of adulthood. For people in relationships, the mobile phone allows for privacy but also creates new expectations. Contin­uous contact is expected and its absence may create difficulties in relationships. Being in love now comes with a currency of attention, and unless a steady stream of calls and messages flow, one isn’t proving one’s affections enough. 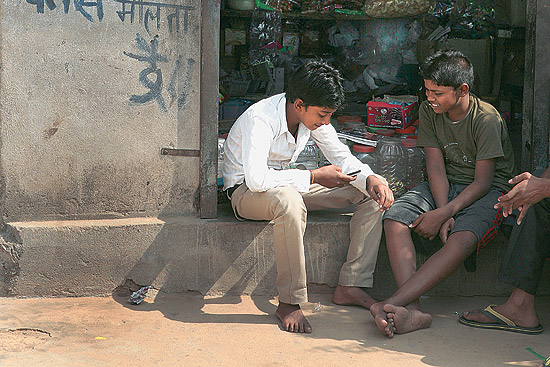 The mobile phone by its nature allows for the existence of a parallel script to life. The ability to be somewhere else also translates into being able to be someone else simultaneously. People manage multiple lives more easily with the mobile phone. Like the temple sevak-cum-dancer-cum-event manager-cum-TV-actor in Kona­rak who uses the mobile phone to juggle parallel careers as well as play doting husband and father. Or the wrestling champion turned bouncer in Gurgaon, who navigates two completely different cultural universes. On the one hand, he lives and abides by the strict code of behaviour imposed on him by his guru and on the other poses shirtless for his Facebook profile. Or, as yet anot­her very enterprising young boy from Rajkot, who claims that he needs a phone with multiple sim cards—multiple sims for multiple girlfriends, as he put it. In a world where opportunities are several but most of them are fragmented, the mobile phones allows for these to be reconciled and availed of.

The awareness of the self is aided by the camera in the mobile phone and has generated a striking familiarity with being represented in media. Wherever one goes, we find an ease with being photographed, particularly among the young; it is as if they have been waiting to be shot and know exactly how to pose for a picture. The consumption of one’s image in all possible contexts is generating a self-awareness of a kind that is unique to this generation. The mobile phone enables a creation of a story about one’s life that is today accessible to everyone; each individual is potentially the heroine in her own movie. In some ways, the self is rehearsed and then staged as a performance for the outside world.

A crucial function of the mobile phone is to consume fallow time. It helps inject apparent purpose in situations where it doesn’t exist and individuals feel attached and significant more continuously. It also serves as an entertainment box which stores things that are of interest and into which one can lose oneself for a while. Often, a phone is ‘loaded’ with entertainment: this allows it to serve as a multimedia juke box of sorts.

The technology itself has been customised both at the supply and demand end and this helps. The idea of the prepaid card has been an energising one which has set the category free for it allows for calibrated and controlled consumption. In combination with very low pricing, both of the phone and the service, it allows for participation by all, beginning with the lowest unit of consumption. Mobile telephony is an open system used in a number of different ways—increasingly, the smartphone is allow­ing for accessing the internet and everything that comes along even as it helps project the indivi­dual to the world. Some use it with diffidence, trusting an intermediary to ‘fill up’ the device with ready-to-use software, particula­rly music, accessed by  learning which button to press.

An intermediate economy has also sprung up around the phone, the kind that small-town India specialises in. The selling, buying and servicing of phones, providing recharges, selling sim cards, mobile phone repairs, games, music and other software are all economic activities that have become a part of a town’s appearance. Small towns are asprawl with the effects of this device; it adds a layer of untidy progress to the town. Along with newer professions that depend on the phone—tutors of all manner, event management companies, the mobile phone has helped create jobs in a direct way apart from generating opportunities through its functions.

As a device, the mobile phone is a compact convergence of many senses into a site outside the self. It allows for an intensified experience of one’s self as it allows for both the inward and the outward projection of the individual. In the smaller Indian towns, the impact of this technology is understandably profound and can only be understood in a limited way at this point in time. But it is clear that a greater awareness of one’s own self but as a unit of identity as well as a combination of desires has been set in motion. The mobile phone creates this awareness as well as helps satisfy the needs that this creates. It is akin to an additional sense that people carry around to find themselves and lose themselves in. Glued to a mobile phone, a whole nation lives elsewhere.

Hello, This Is A Tangled Telecom Web Calling