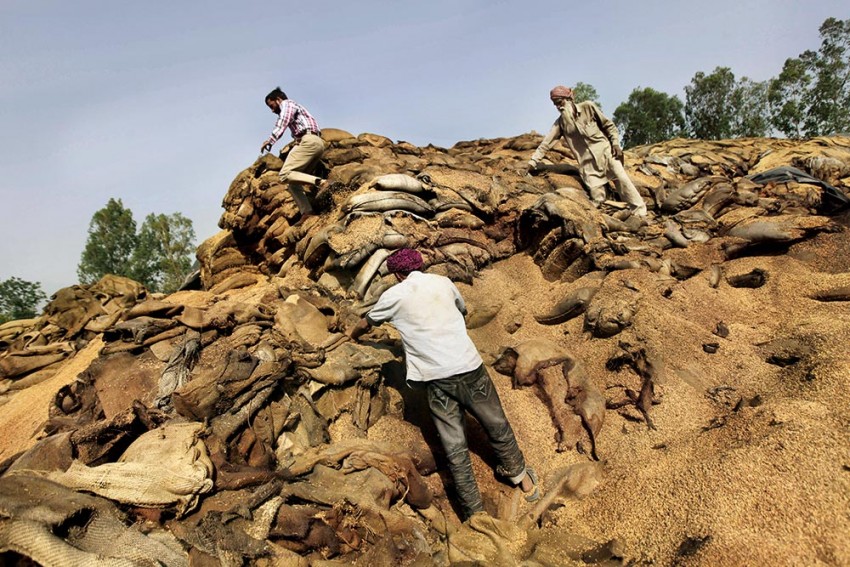 ‘Damage’
Salvaging from grain left to rot due to lack of storage in Punjab
Photograph by AP
Lola Nayar May 30, 2018 00:00 IST Guzzle Grain, Go Hungry 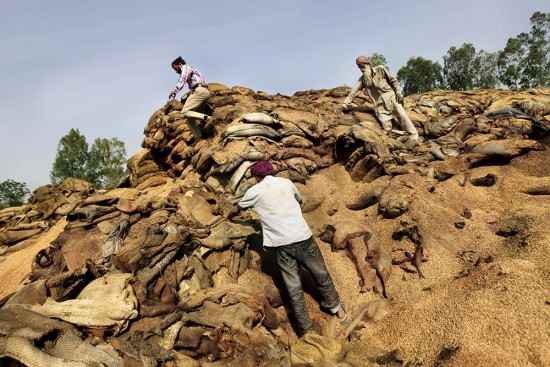 A little over a decade ago, India’s first national biofuel policy categorically stated that ‘fuel vs. food security’ was not relev­ant in its context as “bio-ethanol is produced mai­nly from molasses, a byproduct of the sugar ind­ustry. In future too, it would be ens­ured that the next generation of technologies is based on non-food feedstocks”. On May 16, however, the Narendra Modi-led cabinet, approved a new biofuel policy that “expands the scope of raw material for ethanol production by all­owing use of sugarcane juice, sugar containing materials like sugar beet, sweet sorghum, starch containing mat­erials like corn, cass­ava, damaged food grains like wheat, broken rice, rotten potatoes unfit for human consumption, for ethanol production.”

So, is the new policy a negation of the earlier assurance on the food-secur­ity-versus-fuel debate?

This policy seeks to justify the switch by stating that “farmers are at a risk of not getting appropriate prices for their produce during the surplus production phase. Taking this into account, the policy allows the use of surplus food grains for production of ethanol for blending with petrol with the approval of the National Biofuel Coordination Committee.” Biofuels comprise fuels like ethanol, bio-diesel, green diesel, bio-jet fuels, etc. In India, ethanol is mostly produced by fermenting sugarcane molasses. However, the cyclical nature of sugarcane production, the highs and lows of crop yields and the price offered for ethanol by oil com­panies have all resulted in slow progress in the blending plans.

On the face of it, the new policy promises to help cut down vegetable and food grain waste by aiming to use it in biofuel production, which in turn is exp­ected to help reduce India’s fossil fuel import dependence proportionate to the level of blend. Currently, the national average of ethanol blending in petrol is about 3.4 per cent, though the roadmap had envisaged it reaching 20 per cent by 2017.

We may be well short of the target, but is the answer to allow food to be used as fuel? No, says M.S. Swaminathan, India’s foremost agriculture scientist. “As a policy, diversion of food crops for use as biofuels is not desirable considering the extensive malnutrition and under-nut­rition prevailing in the country. The first priority in the cultivation and consumption of food crops should go to achieving a malnutrition-free India. To quote Mahatma Gandhi: to the hungry, God is bread, and this bread should be available in every home and hut,” says the father of India’s green revolution. 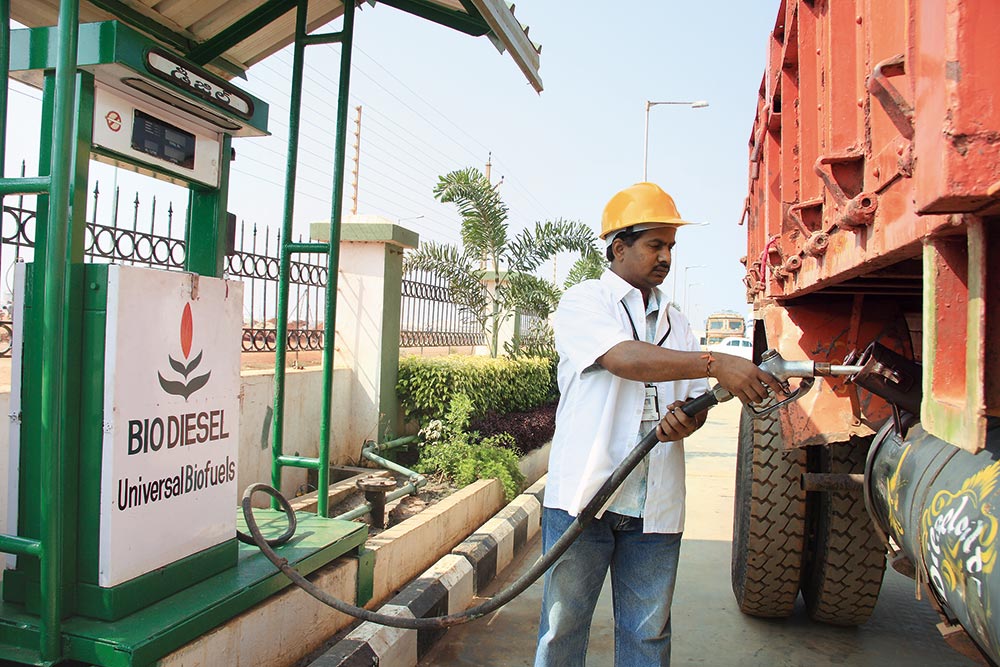 M.S. Swaminathan says diversion of food crops for use as biofuels is not desirable considering the malnutrition ­prevailing in the country.

The renewed focus on biofuels has come as global crude oil prices hover over $75 per barrel. This year is a good sugarcane crop year for India and there are expectations of ethanol blending in petrol reaching four per cent—not enough to make a big dent in the oil imp­ort bill. And now, the government’s plans to permit suitable damaged or excess food crops to be used in biofuel production raises many concerns. Sudhir Panwar, president, Kisan Jagriti Manch, points out that it is very hard to pinpoint what is food waste. “An econo­mic argument is that there is currently no market for damaged food crops. Further, there are no proper statistics on how much of our food crops go waste. For a long time, our policymakers have been claiming that over 20 per cent of our fruits and vegetables go to waste; official data has, however, scuttled this down to around 10 per cent,” he says.

In 2009, the government of Maharashtra was forced to scrap a ­policy allowing grain-based alcohol production units to utilise damaged jowar, a staple food for the poor. During a hearing on a petition against the policy, the Bombay High Court had asked the state government, what is more important, food or wine? Responding to Outlook’s queries, the  United Nations Food and Agriculture Organization states that “the policy should be paired with adequate monitoring to ­ensure that it does not impact food availability or prices. Additionally, given that the use of damaged and rotten food stuff is envisaged to be used for biofuel pro­duction, an indirect, passive impact of this may be a reduced focus on ensuring that such food wastage should be ­minimised in the first place.”

In the past, India saw frenzy in farmland diversion when jatropa and karanjia were being promoted as the biofuel sources of the future. Swaminathan warns that diversion of land from food to fuel will adversely affect food security in view of our growing population. “What we need is a long-term policy and not ad hoc dec­isions each year,” he says. One of the biggest challenges to availability of sugarcane molasses for ethanol production has been its utilisation for higher alcohol production. Before forming the new biofuel policy, the government should first have firmed up a food produce storage policy. Whatever is acq­uired from the farmer for biofuel is bound to fetch a lower price compared to food-grade quality produce.

Yoginder K. Alagh, chancellor, Central University of Gujarat, points out that the ‘policy’ document virtually avoids discussion of any serious issue. “It does not state that cassava and corn are ess­ential food grains for many poor Indians and in backward areas in the jungles and islands. Also, the people involved, particularly Adivasis and tribals, are ­ignored. How will they compete with the corporates and MNCs,” asks Alagh. There is also no effort to see how this food waste could be avoided or utilised by NGOs that undertake the feeding of the poor on a large scale.

Energy expert Bhamy V. Shenoy says it is surprising that, while in developed economies, oil companies are planning for peak oil demand, India is trying to revamp the biofuel strategy of yesteryear. “In addition, there are worries about biofuels competing with food,” he says. Shenoy cites the example of Mexico, which paid higher prices when corn prices went up as a result of corn being diverted to meet the ethanol blending requirement in the US. “In India, where the fear of food shortages is ever looming on the horizon, we can hardly afford to divert land or resources to produce biofuels,” says Shenoy. Raghav Gaiha of the Global Development Institute, University of Manchester, on the other hand, is optimistic about the policy. “The proposed change allowing certain materials to be included for ethanol production pertains to one particular industry viz. ethanol production. Indeed, it would be good to divert other rotten food and plant material, not only for ethanol but also other bio-refineries, which could produce diesel and plastics,” he says.

For the new policy to help the agrarian economy and the poor, Gaiha underlines need for bio-refineries to be established in the villages so that they could utilise the huge wastage of vegetables, plants and fruits, as well as some plant wastage from the forests. Such bio-refineries could create substantial employment, by putting wasted materials to productive use. “It is worth considering that diversion of food that gets wasted under the Food Corporation of India for lack of storage capacity, and is unfit for human consumption, could also be used for ethanol and other products,” says Gaiha. But others argue that there is no denying that large quantities of wasted food, whether foodgrains or horticultural produce, could be better utilised. Better still, more focus is req­uired on improving storage and handling of food produce rather than letting it be damaged and used for producing fuel. A biofuel policy that does not overlook the need to feed the hungry and malnourished would be more environment and people-friendly.

What A Nasty Tumble-Down!