Gusts Of A Desert Storm 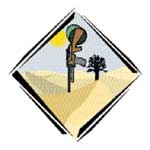 The road to Garha continues long after the macadamised surface has withered away. The vehicle leaves the now rutted surface with a jolt, landing on the soft sand-track for the rest of the journey. Straight ahead, under the setting sun, lies the village of Garha. Now in the shadow of the sand dune that lies to its west, or 'behind' in local parlance. A lone skeletal acacia tree performs a macabre dance atop the sand dune. Some dry shrub rests around the tree as if providing an audience to those skeletal branches reaching out in a contorted ballet of the twisted. They are performing at the end of their lives, for it is doubtful if they will last the dry season that is approaching. Although it is only the beginning so far, it is a very dry beginning, the land wrapped once again in the embrace of a drought.

At this time of the day, at any time of the year, the village can only be seen through the dusty haze of the setting sun. The cattle are coming home to rest after a day's grazing and the young calves are baying in loud excitement over meeting their mothers. The camels, as usual, follow in a silent procession with the goats and the sheep. They are the last of the dust-raisers. It will be a while before the dust settles. By which time it will be so dark that looking ahead would make no sense. I am looking for Garha but I don't want to go there. I will only go to Garha when I have something to give the village. I need to go to 'Desert Hermitage', to the right of the road at a distance of about a kilometre. And I need to get there before the sun sets for it is considered inauspicious to go to a house for condolences after the day is over. I am there to pay condolences to the family of the greatest son of Garha, for what he had done for India.

Desert Hermitage looms ahead down the track. The white of the huts still glowing with the light that remains. The sand dune that overlooks the huts has not been able to dim that light. I park my Jeep outside the gates, leave my shoes there and make my way over the pebbles and sand that make for a driveway. Peacocks and partridges call out for their kin from different directions, as I walk up to the front yard where a group sits in mournful silence. I am among the family of the late Brig (retd) Udai Singh (mvc), and am there to share their grief. I was in my village when the news of his demise came. Everything had to be dropped to visit his family. After all, when I was on my way to Barmer for the last election I had visited Brig (retd) Udai Singh in the military hospital at Jodhpur to seek his blessings. He was, in fact, the only person from whom I sought blessings. I hadn't met him before but had heard of all that he had done in his life, in uniform and after retirement.

'He completely out-manoeuvred the enemy, far superior in numbers, causing heavy casualties and capturing a large number of persons and considerable arms and equipment with very little loss to his own troops. Despite no line of communication and without artillery support, he followed up the enemy and pressed home his attack against the well-entrenched enemy positions till Turtok and a considerable area beyond was captured'. Thus reads the Gazette of India, February 12, 1972. Col Udai Singh, with just three companies of Ladakh Scouts and a section each of mortars and mmgs, 'had been assigned the task of capturing the area from Chalunka to Turtok in the Kargil Sector'. With that force he captured some of the largest swathes of territory during the 1971 war.And land so important for India that when negotiations began for converting the ceasefire line into the Line of Control it was this area that was not returned to Pakistan. Having seen the area in June 1999, it was difficult to imagine how he must have operated over those features in December 1971.

It wasn't simply his military exploits that had made him famous. It was what he did after retirement, for those who matter the most in Shergarh. Brig (retd) Udai Singh was the first to organise welfare activities for the hundreds of ex-servicemen in the tehsil. He galvanised them and today they are an organised outfit, able to unitedly articulate their grievances. Rest houses have been made, medical camps and mobile canteens organised regularly. The invisible group, however, for whom he worked tirelessly, were the war widows of the tehsil. He worked endlessly for easing them out of their pension, medical and other problems. So it was only natural to make my way to Desert Hermitage, his dream of a resort among the sand dunes, to condole with his family and pay my respects to a great Indian. Sitting with them, grateful for the kindness he bestowed on me, I quietly decided that after something had been done to honour the memory of Brig (retd) Udai Singh (mvc), I would return to his home. And finally even visit Garha, now quiet with all the cattle having rested for the night.

(The writer stood for elections as the bjp candidate in Barmer, Rajasthan. He now works full-time in the constituency and is writing a column on life and development issues in Barmer.)