The Discipline Of Deeds 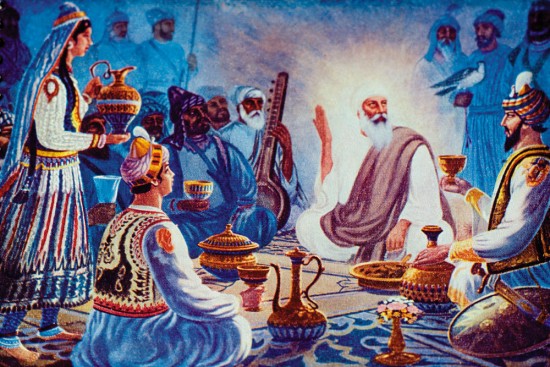 Indian religions love their wandering heroes. There’s the Buddha, who wandered for six years; Mahavira, who doubled that; and the many saints and yogis of Hinduism who meander homeless all across the Indian past. The 15th century founder of the Sikh religion, Guru Nanak, also took to the road—for some 23 years. He made it as far afield as Mecca and Medina, as well as to the mythic Sumeru, meeting emperors and carpenters, sages and thugs along the way—or so say the Janam Sakhis, a collection of hagiographical stories about his life.

But there’s a crucial difference between Nanak and the Buddha or Mahavira, who renounced their families and communities to find spiritual truth. After Nanak achieved enli­ghtenment, he returned to the fertile fields of the Punjab, and made room in his religious life for members of his previous, unenlightened domesticity. For him, devotion did not require asceticism, renunciation or an attachment to holy men and their institutions, but what scholars of the Sikh ­religion have called a ‘disciplined worldliness’.