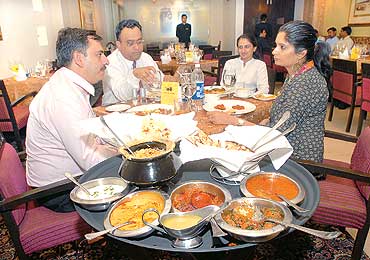 Who hasn’t heard of the wheeling-dealing Sant Singh Chatwal, dear friend to people like Bill and Hillary Clinton? And who hasn’t heard of his Bombay Palace restaurants? When we learned one was opening in Hyderabad, we were naturally curious to check it out. Bombay Palace is positioned as ‘India’s culinary ambassador’ in cities like New York, Toronto and Kuala Lumpur. Which perhaps explains the fact that the menu card describes baingan bharta as ‘smoked aubergine’, batata puri as ‘lentil puffs’, batak pyaaz as ‘juliennes of duck’ and gajar halwa as ‘carrot fudge’. We put ourselves in the hands of the chef and asked him to order for us. As a result, we were served a pan-Indian meal of jhinga lajawab, followed by Kashmiri roghanjosh and murgh tikka makhni. Everything seemed eyebrow-raisingly high on cholesterol, but we were...