Ahead Of Elections, A Walk Through Rajasthan's Political Landscape 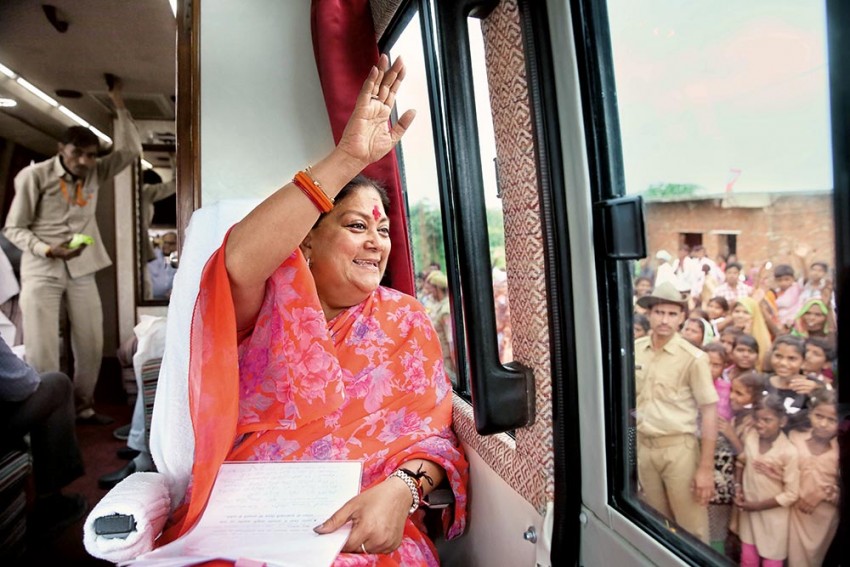 On The Road
Rajasthan CM Vasundhararaje
Photograph by Getty Images
Satish Padmanabhan November 28, 2018 00:00 IST Ahead Of Elections, A Walk Through Rajasthan's Political Landscape 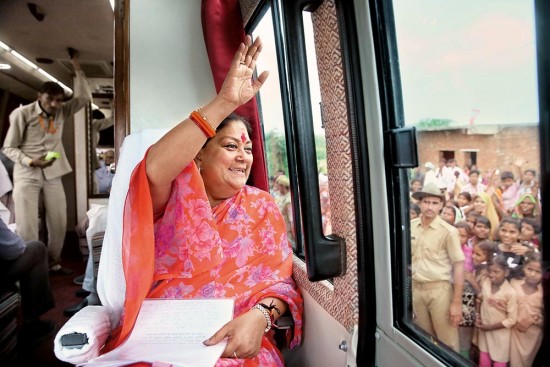 “You have to make history. You have to help me make hist­ory,” exhorts Prime Minister Narendra Modi at Alwar’s Dussehra ground in the backdrop of the rugged Aravalis. Rajasthanis have been deserting the ruling dispe­n­sation for the past 25 years. With his first rally in the state last Sunday for the December 7 assembly elections, Modi is urging the voters to halt this trend. In February, they had the party worried by voting in the Congress candidate in the Lok Sabha bypoll by nearly two lakh votes.

Modi’s magnetism seems intact at the rally, the crowd cheering lustily to his jabs at Congress leaders and the party’s policies. But travelling through the state, it is clear that chief minister Vasu­ndhararaje has a tough job at hand in trying to retain power. And she is fighting hard. We meet her after her rally in Kishangarh the previous evening at Rajasthan marble mogul Ashok Patni’s house. Raje had spoken at 14 rallies that day and had one more to go at nearby Dudu. She looked battle-ready. “The pace of development in Rajasthan has never been faster than in the past five years. If the work had happened at this rate in the first decades of Congress rule, Rajasthan would have been a different state,” she says.

In some ways, it is Raje’s own election. Her candidate selection process—with many discussions between her and the central leadership—has been making headlines. In the end, Raje’s list has p­revailed, according to observers, and most of her can­didates got tickets. To counter the ire of voters towards their present MLAs, Raje has fielded 90 new candidates. But it also means there are many disgruntled party workers plotting the downfall of those who got tickets. Of these new candidates, some are old names fighting from a different constituency, while many are first-timers. “Development will be the only agenda. After all, it’s in my name,” says Vikas Choudhary, the BJP candidate from Kishangarh, a fre­s­h-faced 31-year-old getting introduced to the bluster of elections. He says Raje’s government has spent Rs 1,500 crore in infrastructure work in his constituency alone and that no other chief minister has introduced so many new schemes. 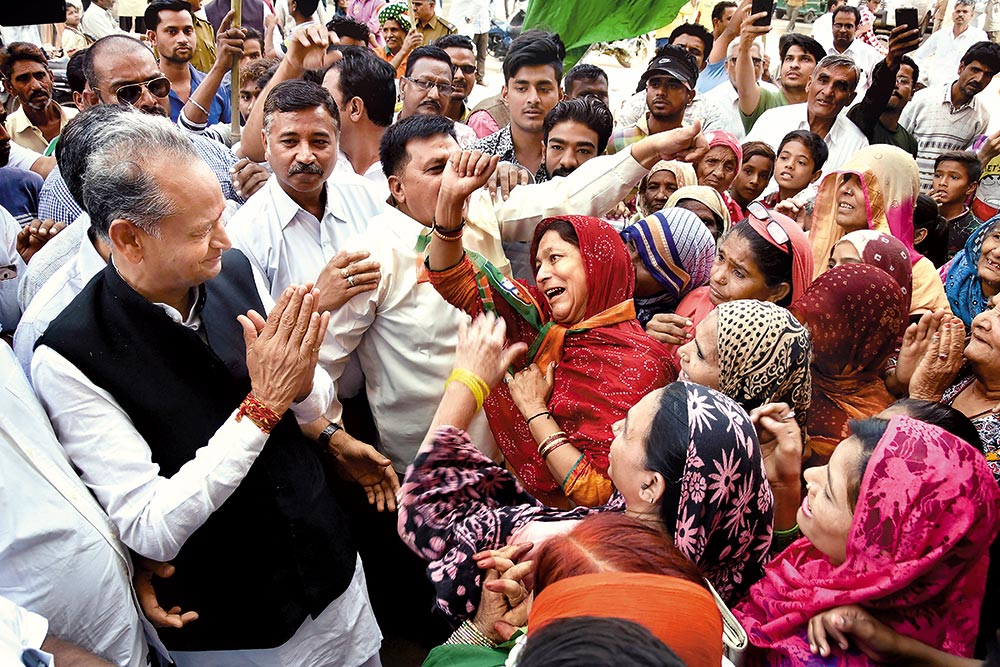 But too many new schemes can be double-edged. We pass through Munder  village in Baran district near Kota. It is dusk and the village is in half darkness as the voltage is low. The sewage is blocked and its water flows on to the unpaved narrow lanes. The village has a higher secondary school but the teachers have not showed up for a few months. Anita, a 16-year-old, bright-eyed Class XI student says she wants to study but there is just no way. “None of the schemes have reached us,” says Gaurishankar Yadav, a small-time farmer with eight bighas. “Some houses have been made under the scheme (Pradhan Mantri Awas Yojana or PMAY), but they are bagged by only a few important people of the village. Small farmers and labourers who are OBCs like us have not got them,” he says.

As we go farther, crossing giant high tension electricity poles standing like Ravana and Meghnad effigies, the Chambal fertiliser factory afar, all lit and leaking fumes like a stranded spaceship in the darkening skies, we come to Palayatha village. The roads here are better but the villagers say they have been built by Chambal Fertilisers, not the state. Here too the complaint is that the schemes have not been executed well. A few families got Rs 12,000 to build toilets under the government’s open defecation free (ODF) plan. But only some are functional, others have been turned into store rooms.

“We will keep our deliverables to a few most ­important schemes aimed specially at the youth and farmers,” says Sachin Pilot, one of Congress party’s chief minister probable. “We are not going to start or stop schemes because they were of a different government, there will not be any wilful resentment of them. The most important thing would be to remove the corruption from these schemes,” he says. We meet Pilot, tall and studious, at Saud Saidi’s 150-acre organic farm on the banks of the Banas river in Tonk, from where he is contesting. He says the Congress is “within striking distance of victory” and insists that it is not a negative vote, not just the resentment among the electorate against the Raje government but hope of better programmes for them from the Congress. 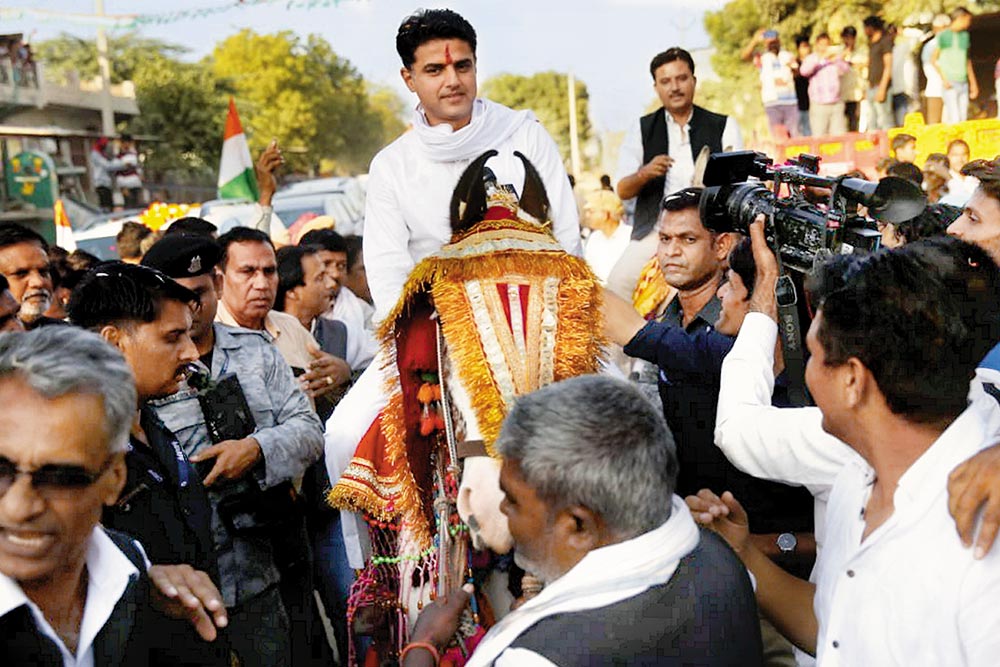 Sachin Pilot of the Congress on a horse

There is, of course, the big question hanging as to who would be chief minister if the Congress does win, Pilot, or party veteran and two-time CM Ashok Gehlot. “When the Congress is so confused about its CM candidate, won’t the party fuse?” mocked Modi at his Alwar rally. The pulls and pressures from both their camps are said to have led to some poor candidate selection. So, who will be the CM? Pilot has his stock answer: “Once we get the majority, the party and the MLAs will take a decision about who will head the government.” It won’t be as simple as that, many more equations will come into play. Pilot is a Gujjar and it is to be seen if he will be acceptable to the influential Meena community. “I think in the end, the Congress may go with Gehlot,” says a senior journalist of a Hindi daily who didn’t want to be named. “The party thinks Gehlot got them Karnataka and Gujarat as well as Ahmed Patel’s Rajya Sabha seat, which was a prestige issue. Rahul Gandhi may be in favour of Pilot, but he may have to go with the views of others,” he adds.

Gehlot appears confident and collected when we meet him at ten at night in a Jaipur hotel, even if his voice is croaking after three days of continuous speeches. “I am the most content politician in this country,” he smiles. “I have never asked anything from the party. Only once I asked for something—to contest the assembly election in 1977. I got the ticket, but I lost. Since then I have never clamoured for anything, I have never considered any post a priority. I will be happy with whatever role the party decides for me,” says Gehlot. Behind this camaraderie, a lot of levers are being pressed for the top post, say observers. There is also talk of both of them sharing the CM’s term.

However, before all that, there is the election itself. Campaigning in Rajasthan enters the crucial final lap now. PM Modi is slated to do at least ten rallies, Rahul Gandhi even more. A lot can change in these last days, as it happened in Karnataka recently, when the BJP emerged as the single largest party at the last minute. But for now, the words of Lokesh Kumar, a fruit-seller at Tonk’s clock tower—which amazingly shows the correct time on all four clocks amidst chaos around it—of “badlav ki hawa,” or winds of change, have a loud echo.

By Satish Padmanabhan in Kota, Jaipur and Alwar