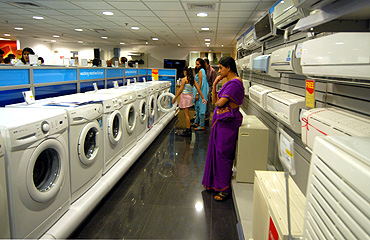 Marking the "last year of our government" with a Pongal lunch at his residence on January 15, Union finance minister P. Chidambaram urged detractors of India's spiralling growth to look beyond the present. "Investors seem to be confident of the future of the Indian economy," Chidambaram stressed under the warm winter sun, pointing to the overwhelming response to the Reliance Power IPO.

But looking beyond the present is easier said than done. With the Union Budget around the corner, fallouts from an appreciating rupee coupled with high interest rates are starting to hurt India's industrial growth. After monthly government data indicated a slowdown in industrial productivity in September, there was a big slump in November—5.3 per cent growth against 15.8 per cent in the same month last year—the slowest pace in 13 months. Seen in the context of slower export growth and below-targeted performance from agriculture, most think-tanks project a lower 8-8.5 per cent gdp growth in 2007-'08 against 9.4 per cent during 2006-'07. To make matters worse, recent data indicates that the US economy is in recession.

The worrying numbers for November—manufacturing grew by a weak 5.4 per cent, and production of consumer goods fell by 2.6 per cent—have prompted the prime minister to form a panel to suggest remedial measures. Experts like Shashank Bhide of NCAER feel it's too early to attach any "significance" to the dip, but does voice concerns "that while capital goods are doing well, consumer durables are not, owing to tighter credit policy". Adds Rajiv Kumar of icrier, "Industrial demand is sustaining so far, but consumption demand is being affected. If this is the beginning of a long-term slowdown, it may mean a slower industrial and economic growth."

For now, all this hasn't impacted the great investment rush. For one, there's the 12.2 per cent rise in demand for capital goods such as machinery and equipments during April-November 2007. Pointing to proposed investment intents of Rs 5,34,686 crore between April and November 2007, Anwarul Hoda, member, Planning Commission, says, "Going by the data on industrial investment intention, things are looking up." Of course, Hoda adds that the real investments will be known later. The commerce ministry too stresses that Rs 52,000 crore has been invested in 75 operational special economic zones. But commerce secretary Gopal K. Pillai expects globalisation to have an impact: "There could be a little bit of shake-up, particularly in the case of small and medium enterprises. It all depends on further rupee appreciation this year, which is expected."

And that is worrying corporate India. Says Ajit Ranade, chief economist, the Aditya Birla Group: "Rupee appreciation is proving to be a severe handicap for the domestic industry, due to the cheaper imports that it enables, particularly from China. If the interest rates are also higher, it does not help." Though companies are striving to improve productivity, experts do not rule out slower industrial growth. Despite the drawbacks, Siddhartha Roy, economic advisor, the Tata Group, says: "New investment plans will be affected given the high interest rate, but investments already underway will not be stalled." Data shows declining bank credit growth—from 33.3 per cent in the fourth quarter of 2006-'07 to 22.4 per cent in October '07.

While the RBI will not increase interest rates, it is more likely to maintain the status quo. Says Hoda: "I would have been happier if falling consumer durables sales had not occurred and interest rates had softened." The RBI, which has raised interest rates nine times since 2004 to keep inflation (currently at a benign 3.5 per cent) in check, is slated to announce its quarterly review of monetary policy on January 29.

The impact of monetary policies is being felt on jobs also. For now, it is estimated that slower exports (8 per cent growth in rupee terms) have resulted in the loss of over 2,00,000 jobs in labour-intensive sectors. "In the current scenario, creation of jobs has been prevented," says labour secretary Sudha Pillai. Services is the only sector that is seeing job growth. By year-end, when all notified SEZs become operational, another 1,00,000 jobs will have been created. But Vinayak Chatterjee of Feedback Ventures, an investment consultancy, presents a differing view: "A combination of factors, including continuing lack of progress in agriculture, drying up of foreign liquidity, infrastructure bottlenecks and the high interest rates are factors that could hurt the economy."

So far, expectations of a slowdown in the US have not impacted business sentiment in India. But this could change. In this context, experts feel easing of credit rates and norms for overseas borrowings would give an impetus to industrial and infrastructure investments. Hemant Kanoria of SREI Infrastructure Finance says: "There should be more clarity on the financing side for long-term debt. The cost of funds will come down if overseas borrowing is allowed for long-term funding." However, Chidambaram's impending budget would probably not address these issues.

So, what can we expect from Budget 2008? Given the stagnating labour-intensive exports sector, Chidambaram may ease some of the taxes hurting exports. The government may also ease policy constraints—in highways, ports, roads—to infrastructure and industrial investments. The Planning Commission has projected an investment requirement of $500 billion for infrastructure till 2012. Of this, 44 per cent is expected through private participation. "Money is not the issue, but delay in finalisation of the model concession agreement in case of ports is an obstacle," admits Hoda.

Clearly, agriculture will be a focus area. The sector grew by 3.6 per cent in 2006-'07, but will miss the four per cent target yet again this year. Experts say only investments will not solve the problems of irrigation, poor market support and farm inputs. "Lot of resources are flowing into agriculture, but not all are productive. For an overall, inclusive growth, more investment is required in agriculture, improving connectivity and electricity supply—besides health and education," points out Ranade.

Given that general elections are just a year away, there is little chance of major pro-reform measures in the budget. At the same time, Chidambaram hinted at efforts to cut "the flab in the system" to ensure efficient utilisation of public funds. This may see a further push towards Goods and Services Tax (GST), slated to be rolled out from 2010. Socio-economic measures like better targeting of food and fertiliser subsidies are also in the offing. Development could well be the plank for the general elections.