The war against terror has only strengthened the despots in the region, fanning more disaffection 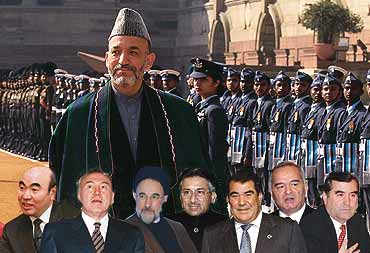 outlookindia.com
-0001-11-30T00:00:00+05:53
One year into the global war against terrorism and the world can congratulate itself that Al Qaeda and the Taliban no longer pose a military threat to Afghanistan and the surrounding region. But tactical failures of the US military forces have led to thousands of Al Qaeda militants escaping the dragnet around Afghanistan and permeating the world with more dangerous and secretive terrorist groups, who will strike again in western capitals sooner rather than later. Across Central and South Asia, though, the aftermath of the war in Afghanistan has led to growing instability and domestic political crises in every country. These political crises, virtually ignored by the West, are unpredictable and likely to define the coming 12 months rather than the continuing war against Al Qaeda.

Obsessed with its single-track policy of hunting down Al Qaeda leaders, the US has not attempted to deal with the political ferment in the region. Its strategy, leave alone its tactics, have changed little from the time the Taliban collapsed in December 2001. The Pentagon and the cia still dominate policy-making in Washington. The more savvy state department and secretary of state Colin Powell appear to be out of the loop, as are the US Agency for International Development, the treasury and justice departments and Congress. They should be part of the decision-making process and pushing for a wider strategy to persuade Afghanistan’s neighbours to carry out political and economic reforms in order to avoid future instability or escalating public sympathy for local Islamic fundamentalist groups.

Although the Taliban and Al Qaeda pose no military threat to Kabul, sporadic terrorist attacks on US forces in the country continue. Even US defence secretary Donald Rumsfeld admits the situation is "untidy". Afghan President Hamid Karzai—who survived a major assassination attempt this Thursday—still has to find a political formula to rein in the warlords outside the capital. He has been prevented from doing so, not just by the continuing ethnic and tribal tensions in a country devastated by 23 years of war, but by the stark failure of the international community to deliver on two key pledges it made at the signing of the Bonn agreement which set up the new government in Kabul.

The first was to mobilise an International Security Assistance Force (isaf) to stabilise Kabul and five other cities. The isaf is present only in Kabul. Even more dangerous has been the world’s failure to deliver on reconstruction funds to help rebuild the country—which Karzai depends on to reduce warlordism, provide jobs and revive the economy. Of the $1 billion dollars that have been delivered so far, 90 per cent has gone into humanitarian relief. Consequently, not a single housing or road-building project has yet started.

With the Loya Jirga, or tribal assembly, electing Karzai in June as president for two years, he is probably the most legitimate leader in a region where dictatorship is the norm. None of Afghanistan’s neighbouring rulers can claim legitimacy through democratic elections. Only Iran—Washington’s bete noire—has anything approximating a legitimately elected government, although the government is paralysed because of infighting between moderates and hardliners.

In the five Central Asian republics, whose leaders still hold ‘Soviet-style’ elections in which the ruler is the only candidate and even then the vote is heavily rigged, the question of legitimacy has never been more pertinent. Since last October, Uzbekistan, Kyrgyzstan and Tajikistan have hosted western military forces for the war in Afghanistan, but they have used their newfound importance in the West as a convenient excuse to step up repression against their political opponents. Even Turkmenistan and Kazakhstan, who have only provided facilities to the western forces, have not hesitated to do the same.

Ironically, the western military presence has created exactly the opposite reaction. For the first time since the break-up of the Soviet Union a decade ago, Central Asia’s long-dormant and largely underground secular political opposition is galvanising against dictatorships, in support of democracy. Almost all the Central Asian leaders are now threatened by their first significant public political movements and repeated demands for them to resign. They also stand face to face with Islamic extremists, who were once supported by Al Qaeda. The economic meltdown and corruption in Central Asia is only adding to the youth’s disenchantment with their leaders.

The West has refused to persuade these rulers to carry out political and economic reforms. A crisis is inevitable, and the next 12 months may see several of these leaders toppled from power. With no succession process in place and no institutions to hand over power peacefully, the danger of a long-term instability is unavoidable.

In Pakistan, the domestic crisis is reaching a boiling point. But Washington conveniently ignores this. It’s already clear that Pervez Musharraf is planning a rigged election on October 10 in which Benazir Bhutto and Nawaz Sharif will be barred from taking part. He is now totally isolated and faces a stream of criticism from all political parties and civic groups. A crisis will erupt either just before the election or right after.

A crisis in Pakistan will have overwhelming repercussions. Its future is at stake, what with a bellicose India at the gates and Al Qaeda cells firmly planted inside the country—the law and order situation is grim with militant groups killing westerners and Pakistani Christians and an acute economic recession and deep polarisation between the secular democratic parties and the Islamic groups haunting the already fractious nation.

Next door, India has, until now, used the war against terrorism to continue its repressive policies in Kashmir, actions which earlier this year prompted Pakistan to step up support for militant Kashmiris, which in turn led to a near war between the two nuclear states. US diplomatic efforts have only gone so far as to defuse the immediate crisis, but Kashmir remains on the boil. India is determined to hold elections there in September while Pakistan and the militants are determined to sabotage them.

Another round of heightened tensions is unavoidable. The beleaguered military government in Pakistan and the Hindu fundamentalist bjp in New Delhi are unlikely partners to even start talks on Kashmir—unless there is concerted international pressure.

Iran faces a paralysing stand-off between the moderate government of President Mohammed Khatami and the hardline mullahs. A single spark could make it erupt out on to the streets. The hardliners are now determined to destabilise Khatami by backing all anti-western Islamic groups in the region, be they in Afghanistan, Central Asia or West Asia, while the US has disengaged itself from trying to open a dialogue with Khatami.

Political instability in the region is just what Al Qaeda and other extremist Islamic groups desire to plot their revival. What is clearly needed is a hard focus by the West to persuade these regimes that the war on terrorism must also mean that they have to change their ways and their relationship with their own people. There is no substitute for representative governments, which heal rather than further divide these extremely polarised societies. The international community’s strategy must also include much greater economic support for the region as a whole. The ideas of ‘nation building’ or ‘a Marshall plan for the region’—which are anathema in Washington—are essential if the West is to save the region from further catastrophe.

The wider implications of such a strategy would be profoundly beneficial for improving relations between the West and the Muslim world. Angry Muslims will then have to face the reality that the West does not only destroy terrorist governments like the Taliban, but also helps in rebuilding countries and economies. However, none of this is likely to happen if the US attacks Iraq without international support and that too while West Asia is in flames. The Arab and Muslim world will erupt in universal anger, and terrorism may then become the only political platform for many other groups to conduct a war against the US.

It’s true that Al Qaeda or its extremist clones can never hope to rebuild a command and support base in the West as they did in Afghanistan. But instability in Central and South Asia, unpredictable regime-changes or mass movements on the streetscan lead to enormous opportunities for Al Qaeda to rebuild itself.

The war against terrorism has entered a much more critical and complex phase which now involves rectification of the gross political and economic imbalances in the region. The first anniversary of September 11 is thus a time not to wallow in self-congratulations but to address the problems ahead.

(Ahmed Rashid is a journalist and author of the much-acclaimed Taliban: Militant Islam, Oil and Fundamentalism in Central Asia.)