The battle for Baghdad could be the fiercest yet in the war. But it's the ordinary citizens taking the brunt. 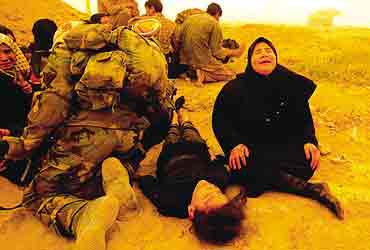 outlookindia.com
-0001-11-30T00:00:00+0553
In the darkness of Baghdad under siege, the first victims of the ground war in the capital’s vicinity began falling in the dozens. Reports suggested that ordinary citizens were called by Iraqi military by loudspeaker to defend the airport, the first piece of Baghdad real estate to be touched by coalition forces in their advance into the heart of Saddam Hussein’s regime. American and British soldiers took them on, inflicting heavy casualties in what’s expected to be the fiercest battle yet in the war in Iraq. Early Friday morning, the US provided a chilling, precise death count around the airport—320 Iraqi soldiers dead.

More than two weeks after coalition forces fired their first missiles, the lights went out in Baghdad. No one knows who flicked the switch, or why. It’s not clear yet how long it will take the coalition forces to take the city. In his speeches before the war, Saddam promised that if the US showed up at his doorstep in Baghdad, he would engage them in urban fighting—not their strong suit—and inflict enough casualties to turn even the most ardent supporter of the war in the US against it. The battle for Baghdad is expected to be long and bloody. Yet, a sudden collapse of the city can’t be ruled out.

As American troops swept towards Baghdad, and rethought their strategy, casualties simply mounted. Harried by guerrilla attacks on the supply line and suicide bombings, the US decided to encircle and secure towns along the way to Baghdad, something they hadn’t conceived earlier. Such a strategy entailed bloody repercussions. It seems the Americans feel that Baghdad’s collapse would persuade Iraqi soldiers to surrender in towns where they continue to resist coalition troops.

Internationally, anger is already growing over the number of civilians who have died over the last two weeks in attacks on civilian targets, something the coalition had earlier promised it wouldn’t do. One of the starkest examples was the blowing up of at least seven civilians in a van passing a US military checkpoint near the holy city of Najaf, south of Baghdad. Coalition soldiers were perhaps jittery due to the deaths of four of their colleagues when a suicide bomber detonated his car at a checkpoint a couple of days ago.

The reaction to the mounting death toll was loudest in the Arab world, where Arab satellite networks and newspapers rarely shy away from showing grisly pictures of injured and killed Iraqi civilians. "My heart just fell to pieces when I saw the pictures," said one elderly Jordanian lady after watching horrific images on Arab television. "The kids are the ones that make me the saddest." Jordan, in a move likely to resonate well with its people, called in the US ambassador on Thursday to formally complain about the number of civilian casualties. In an interview with a local news agency, Jordan’s King Abdullah said: "We feel pain and sorrow as we see on our television screens the growing number of martyrs among innocent Iraqi civilians," he said. "As a father, I feel the pain of every Iraqi family, of every child, and every father."

In Basra, though British forces said they were making progress, they were left targeting Iraqi military on the outskirts and dodging counter-attacks. Najaf became the subject of a shouting war between Iraqi and American forces, each claiming that the other had attacked the holy sites there. The Americans say they have essentially secured the city, but were confronted by concerned citizens, apparently non-violently, when they moved to get closer to one of the holiest Shia Muslim sites in the city—the tomb of their revered Imam, Ali.

The real horror stories will have to wait till the end of the war. Expect also claims and counter-claims: western analysts suggest Saddam’ forces might turn on their own people and claim that civilians were killed by the coalition. Either way, more innocent civilians are doomed to die.

...Night Of The Pawns