Body and mind stretches, talks from guest experts, the Indian team is getting a thorough tune-up 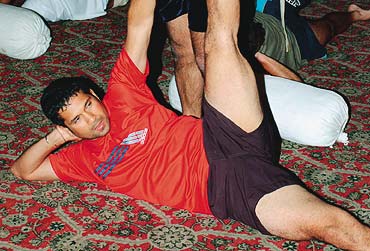 Literally all the players, like the little master, are trying to raise their fitness levels ahead of a long cricket season this winter. First, New Zealand comes to India for a Test tour, followed by a triangular one-day series between India, NZ and Australia, and then off on the toughest challenge of life—to Australia. But this camp is unlike any other that Indian teams have gone through in the past, focusing as it does on the body, the mind and the spirit in equal measure, and involving experts from diverse disciplines, from sports to the media.

Fitness, of course, is the buzzword at the camp (it has been split into two sessions—one for a fortnight and the other for a week, with a five-day break) with a strenuous schedule that has forced the cricketers to lead an unusually quiet life after dusk. Surprisingly, they have not even taken to the umpteen swish watering holes, not even to endorse products. So much so that one of them was heard whining, "bistar pe hil nahin sakthe (can’t move our bodies on the bed)". A few others, though, have been rushing off at the end of the day to join their spouses.