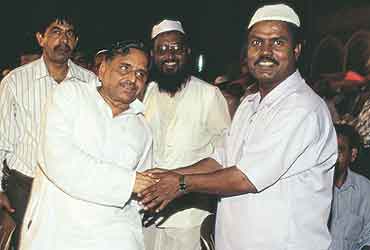 outlookindia.com
-0001-11-30T00:00:00+0553
These days, 'Maulana' Mulayam Singh Yadav seems a bit too anxious to prove his secular credentials. In his budget speech last fortnight, the UP chief minister announced the setting up of an Arabi-Farsi Madarsa Board, jobs to 3,000 Urdu teachers and plans to set up an Urdu-Persian university in Rampur. And in his latest sop, government schools up to intermediate level have been told to close by 12 noon on Fridays [since withdrawn, as the issue went to press - Ed] so that Muslim students do not miss namaaz. Is all this a cover for the curious saffron inclinations he has unwittingly shown of late? For, nobody can be more certain about Mulayam's 'betrayal' than the Muslims who comprise 18 per cent of UP's electorate.

From the serene campus of the Dar-ul-Uloom at Deoband in western UP to the crowded lawyers' chambers at the Lucknow High Court, the conversation these days invariably turns to the options before the Muslims in the forthcoming Lok Sabha polls. Almost everyone believes that Mulayam has finally succumbed to the BJP. "Mulayam Singh Yadav is suspect. There is no doubt about that anymore," says Adil Sidhiqui, the Dar-ul-Uloom spokesperson. "The problem is—what is the option? Is the Congress in any position to give us an alternative?"

Sidhiqui is voicing the biggest dilemma confronting the Muslims in UP now. According to lyricist and writer Javed Akhtar, the community's faith in Mulayam being a symbol of secularism was misplaced from the start. "How did they ever imagine that Mulayam is going to be any different? Like the others, he has also used secularism as a political tool. Secularism has become a much abused word in India. There is something seriously wrong with us when we interpret symbolic politics as a mark of someone's secular credentials," Akhtar says.

Mulayam himself is very sensitive to these "baseless accusations". "I have no understanding with the BJP. Hamare liye unke man mein koi narazgi nahin hai (Muslims are not angry with me). These rumours about me going soft on the BJP have been spread by the media and will not last long," Mulayam told Outlook.

And he's right in one sense. Despite his "defection" to the saffron camp, few Muslims believe they will consider any other political alternatives, such as the Congress. "The Congress missed the bus in UP long back. They have not benefited from either the OBC or the SC assertion in this state. Regardless of where Mulayam is shifting now, he is still the most promising alternative for the Muslims. The Congress and BSP have not really been able to present a combined force. And even if that happens, there would still be doubts about the BSP's future strategy," says Prof Rizwan Qaisar of Jamia Millia Islamia.

Qaisar does not foresee any drastic changes in voting patterns too. "Unlike Bihar, where the Muslims face no such problem with secular Laloo at the helm of affairs, the UP Muslims really have to think hard. They trusted the BSP but it aligned with the BJP last time. And now it is their old friend Mulayam who is exhibiting similar inclinations. So what do the Muslims do? They select candidates who can defeat the BJP. In a larger sense, it does divide the Muslim vote and makes it politically redundant," he admits.

Zoya Hasan, political scientist at JNU, wouldn't go to the extent of saying the Muslim vote has become "redundant" but does feel that Mulayam's "arrangement" with the BJP has added to the confusion in UP. "Everyone understands that he has formed the government in UP with tacit support from the BJP. It complicates things for the Muslim voter. He knows that Mulayam has an understanding with the BJP and that Mayawati is unreliable. So whichever way he goes, the possibility of his vote indirectly helping the BJP looms large. Overall, there are few options especially if you are a Muslim voter in UP," she says.

Prominent Muslim organisations like the Jamaat-e-Ulema-e-Hind have increasingly become more vocal about Mulayam's 'betrayal' but in the absence of a Congress-BSP alliance till now, they too have not come up with a coherent strategy for the elections. "All of us know what Mulayam has been up to. One only hopes the Congress comes up with a better poll strategy in UP," says Maulana Mehmood Madani of the Jamaat.

Prof Imtiaz Ahmed of JNU feels Mulayam has "exploited" secularism as a convenient tool. "For Mulayam, secularism is a popular word, a vote-catcher. He has gained popularity among the Muslims by using this card. At the same time, he does not have any qualms about setting these pretensions aside when political compulsions guide him otherwise," says Ahmed. According to him, the Congress could have provided an alternative to Muslims at a time like this when everything is in flux. "But the Congress has not built these bridges so it is not an alternative."

Even if the Congress had built bridges with Muslim organisations, columnist Saeed Naqvi does not think its chances would have improved greatly in UP. He says the political equations are fairly clear in UP. "Mulayam Singh will abuse Kalyan Singh and vice-versa. Both will consolidate their votebanks and shake hands after the elections. The Congress has no hope in hell of exploiting the circumstances," says Naqvi.

But some, like Zafaryab Jilani of the All India Muslim Personal Law Board, feel that all is not lost for the Congress in UP yet. Despite the several drawbacks—a demoralised cadre, non-existent state leadership—the heartening fact, besides Mulayam's betrayal, is that propaganda around Sonia's 'foreign origins' has absolutely no takers among the Muslims. "In fact, Muslims would actually consider voting for the Congress if they feel it is in a position to keep the BJP out. But if the Congress candidate is not even in the race, then why waste their vote," asks Jilani.

The Muslims in UP are watching carefully how each political party positions itself in the run-up to the LS elections. But one month is too short a period for political equations to change drastically. Despite his recent saffron tilt, Mulayam may still keep part of his Muslim votebank intact. For want of better options, many Muslims may be left with little choice but to go with Mulayam. Even if he is not a blue-blooded Maulana anymore.