Graveyard Of Empires, Crucible Of Coalitions

The second Bonn meet on Afghanistan built on the first. Will inertia hit? 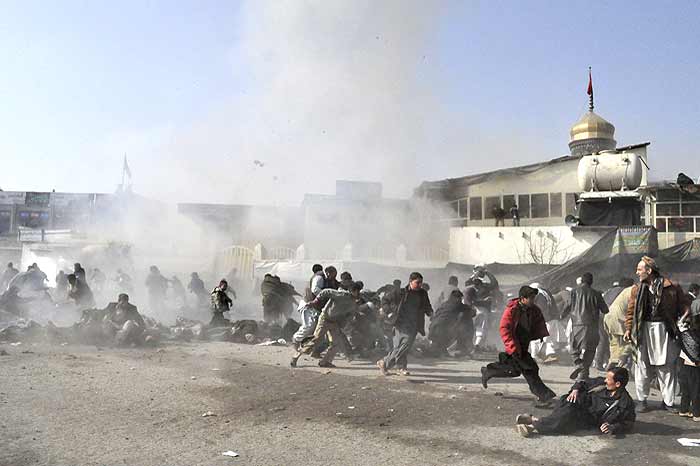 The first International Conference on Afghanistan was held in Bonn from November 27 to December 5, 2001. Ten years later, to commemorate and coincide with what had become popularly known as Bonn 2001, the city hosted the second edition of the conference (called Bonn 2011) on December 5, 2011. In the intervening decade, there was the Afghan Compact (2006), the London and Kabul (both 2010) conferences, the Istanbul Regional Conference (2011) and 13 meetings of the International Contact Group, a congregation of diplomats at the special envoy level, in capitals around the world.

There are differences between the two Bonn conferences. Bonn 2001 was held in Guest House Petersberg, where post-WWII, (West Germany Chancellor) Konrad Adenauer conducted negotiations spanning 25 meetings with the American, British, and French commissioners, till, finally, in 1949, the Petersberg Agreement was signed, giving the nascent republic of West Germany the power to function as a state. Bonn 2011 was held in the modern International Conference Centre, the seat of the German Parliament when Bonn was the capital. The two venues reflect the differences in the two conferences they hosted. In Bonn 2001, 17 countries sent observers. Bonn 2011 saw 85 countries and 15 international organisations attend. External affairs minister S.M. Krishna led the Indian delegation.

Four Afghan delegations had attended Bonn 2001. Some amongst them had spent the better part of their lives outside Afghanistan and others had been a part of the country’s tumultuous past two decades. The Cyprus group, named for the so-called Cyprus Process, consisted of technocrats and emigres. The Peshawar group was, in many ways, a representation of the Gailani family. The Rome group, generally regarded as the former king of Afghanistan’s faction, was the largest. The United Front, which had taken over the reins in Kabul by then, was the main group led by Interior Minister Younus Qanooni. This was the most disciplined group, the clearest in its thinking and closely attuned to the realities in post-Enduring Freedom Afghanistan as its members came, literally, with the dust from the battlefield still on their feet.

By comparison, there was only one Afghan delegation in 2011, reflective of the changes of the past decade. The leaders of the four factions in 2001 had articulated their own separate visions. In 2011, there was a common vision expressed by President Hamid Karzai.

The final deal on the composition of the interim administration in 2001 was struck on the final day (December 5) at a meeting that took place well past midnight in the room of Lakhdar Brahimi, who was the UN secretary-general’s special representative for Afghanistan. About the situation on the evening of December 4, ambassador James F. Dobbins, who was the leader of the American delegation in Bonn 2001, wrote in his book, After the Taliban, “I then spoke individually to the other key envoys—the Russians, Indians and the Iranians—and clearly stated that the moment of decision had come.”

The midnight session in Brahimi’s room was attended by Qanooni and a representative each of the UN, Iran, India, Russia, the US and hosts Germany. It had been agreed that then German chancellor Gerhard Schroeder would attend the concluding session, but by the time he went to bed in Berlin, it was uncertain if he would fly to Bonn, as the meeting in Brahimi’s room had not ended. There was no such anxiety in 2011. Chancellor Angela Merkel addressed the inaugural session as planned, at almost the same time Schroeder did 10 years earlier—albeit under different circumstances.

Another telling difference was that it was Brahimi who had conducted the 2001 meeting, in contrast to the 2011 meeting, which Karzai presided over. In 2001, the meeting had been dominated by the UN and the US. In 2011, these parties took a backseat. And Germany was more active in 2011.

During Bonn 2001, Afghanistan was without a clear leader. The four Afghan factions each claimed to be its representative. Ten years later, Karzai, who has in the interim period been elected twice as president, is the longest serving head of state among the SAARC countries. He was among the seniormost heads of government who participated in Bonn 2011.

Pakistan boycotted Bonn 2011 as a result of the NATO attack on its territory that killed 26 soldiers. But even its participation in 2001 had been low-key and peculiar, best described by Dobbins: “The Pakistani position in Bonn was unenviable.... Almost without exception, the Afghans in the Petersberg were hostile to Pakistan, as were all the regional governments represented there, to varying degrees. Islamabad exacerbated this problem by selecting as its conference representative a comparatively junior official who, until a few weeks earlier, had been its ambassador to Kabul, that is, to the Taliban. Some of the Afghans took this choice as a calculated discourtesy. It certainly seemed insensitive.”

The Chinese participated in Bonn 2011 at the foreign minister level and have been displaying a more active interest diplomatically since the Istanbul Conference. Conversely, the PRC representatives were low-key and hardly spoke—to the extent they could even be considered absent—in 2001. The Iranians were a key player in Bonn 2001 and were prominent in Bonn 2011 as well, represented by their foreign minister who spoke against foreign presence in Afghanistan. Amongst the other key participants, the Russians were active both in 2001 and 2011. Turkey, prominent at Bonn 2011, is now showing greater interest in Afghanistan. 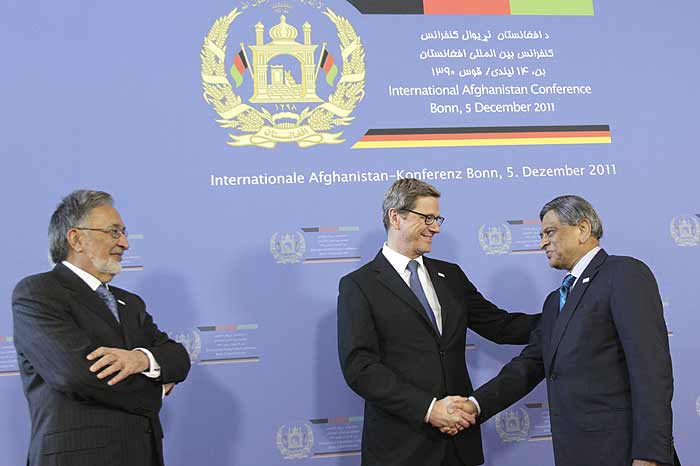 Photograph by Reuters, From Outlook, December 26, 2011

The international community renewed its pledge to engage with Afghanistan at Bonn 2011. India has provided practical evidence of its intent.

Even the atmosphere at the two meetings was different—the first had been a closed-door affair, the second a public event. Where in 2001, there had been colourful Afghan figures—from warlords to exiled royalty, from turbaned tribal chieftains to elegant intellectuals—competing for dominance in the new Afghanistan, informality was the hallmark at the 2011 rendition. Bonn 2001 was unfortunately scheduled during the month of Ramadan, which often threw the itinerary into disarray. Meetings slated to start at 10 am would eventually begin late in the night. Bonn 2011 took place during the month of Muharram on the eve of Ashura, but it did not affect the proceedings. The killing of Shias in Kabul, Kandahar and Mazar-e-Sharif a day after the conference was a stark reminder that the problems of the past have persisted.

The resolutions offered up by Bonn 2001 included, among other things, provisions regarding the transfer of power on December 22 to an interim authority, an emergency loya jirga, the drafting of a constitution and the holding of elections. It also dealt with the roles to be played by the International Security Assistance Force (ISAF) and the UN in the interim period. Karzai was named the new head of government. Barring the security situation and the re-emergence of the Taliban in the following years, most decisions adopted at Bonn 2001 have been implemented. Moving away from the transition motif, the theme of Bonn 2011 was the ‘Transformation Decade’, a deepening and broadening of the partnership between Afghanistan and the global community.

The message intended by the Bonn 2011 Conference Conclusions was that the international community was committed “to remain strongly engaged in support of Afghanistan beyond 2014”. In the Conference Conclusions, terrorism was recognised as the “main threat to Afghanistan”. Promises for future commitments were liberally made in speeches, but there were also worries voiced about aid fatigue, economic collapse in the US and the Eurozone’s identity crisis.

An important requisite for the exit of NATO/US forces from Afghanistan, as the Conference Conclusions underscored, is “the international support for sustainable Afghan National Security Forces (ANSF)... after 2014” and “a clear vision and appropriately funded plan for the ANSF”. Similarly, emphasis was accorded to the importance of regional co-operation and reconciliation, but not much headway was made on that front. Separately, on the sidelines, there were confabulations about the opening of a Taliban office outside Afghanistan.

India’s re-engagement with Afghanistan, a process which was started in 2001, has since been consolidated. India’s assistance to Afghanistan is now $2 billion (Rs 106 billion). Its long-term commitment to Afghanistan is clear from the strategic partnership agreement—the first such understanding that Afghanistan has signed with any country. Indian companies have committed billions of dollars towards the development of Afghan mineral resources and in setting up Afghanistan’s first steel plant. India has removed duties on Afghan exports and will continue to play its part, both at the regional level and in the wider international arena, to assist Afghanistan.

The US and ISAF countries have started downsizing their respective military presences in Afghanistan. The contours of their future policies are still being refined. The public message from Bonn 2011 is that the international community will continue to be engaged in Afghanistan. India has demonstrated evidence of such intent in more tangible terms.

(The author is the Prime Minister’s special envoy and was one of the four delegates present in both the 2001 and 2011 Bonn conferences. The views expressed are his own.)