Grass Is For Cows

Drought-struck Sahariyas of Rajasthan live on grass, but it's death they get more often 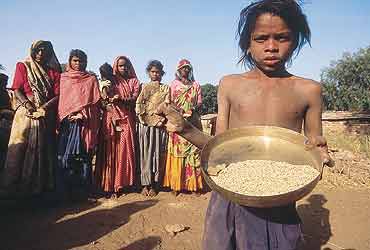 outlookindia.com
-0001-11-30T00:00:00+0553
It's the old Orissa drought and starvation story being played out again. This time in Rajasthan. Even as the casualties mount, the state and central governments would like the world to believe that the deaths were caused by disease and lack of hygiene rather than by abject poverty and starvation. But for anyone who visits Rajasthan's Baran district, the apathy of the district administration and the failure of the Public Distribution System (pds) is clear to see. Whatever spin you give it, it is hunger that is claiming its victims.

The worst hit are the Sahariya tribals in this remote district of the state. Reduced to extreme poverty by five successive years of drought, they are relentlessly stalked by hunger and disease. Last month, there were 42 starvation deaths; most of them children. Acute malnutrition is rampant among the Sahariyas, regarded as one of the most primitive tribes in the state.

The central and state governments have joined the district administration in claiming that the tribals were felled by disease rather than starvation. Simultaneously, food is being rushed to Baran. While politicians and bureaucrats engage in hair-splitting over the precise definition of 'starvation', one undeniable fact is that the tribals are desperately short of food. Their children—without exception—are dangerously underweight and every other child is a victim of malnutrition-induced illnesses.

In village after village, it is the same litany: so many ill, so many dead. Four children have died in Nath Mahodri in the last month, another three in Thikonia. Four have died in Mundiar, 10 in Swaansh. Anger and frustration have built up to the extent that local Congress mla Hira Lal Sahariya was beaten up on a visit to Swaansh. He had earlier announced in Jaipur that there were no starvation deaths in the district. People say they are fed up with politicians of all hues, feeling themselves as much victims of neglect by chief minister Ashok Gehlot's administration as of local MP Vasundhararaje Scindia, now bjp chief of Rajasthan.

So frantic is their hunger that the tribals eat anything to stay alive. Including sama, a local wild grass, the seeds of which are ground into a coarse flour. While the concoction has enough carbohydrate content to keep the tribals afloat, it is very difficult to digest. In fact, it is fit for ruminants (herbivorous animals which chew cud) than humans. Small wonder, a constant diet of the grass-flour rotis has caused stomach ailments in a majority of children. Phang, a leafy forest plant, is the vegetable to go with the rotis.

Says Maya, a Mamunis resident, "We have nothing else to eat and the children are constantly hungry. The sama roti fills their bellies but gives them stomachache. Even the jowar crop has dried up." A peep into her hut reveals a small heap of sama seeds but no other grain or vegetables. Curled up in a corner lies her grandson, a skinny, swollen-bellied two-year-old, unmoving but awake. For a settlement boasting at least two score children, it is unnaturally quiet. Hollow-eyed, the children lie virtually comatose or sit near their mothers, lacking the energy to play or even cry out aloud.

Likewise, or perhaps even worse, is Matia Khera, a small village where the visitor is greeted by the constant mewling of sick children. Not one child under the age of five appears remotely healthy. Or Bhila Kheda Bhal, where 11 children have died of a variety of malnutrition-related diseases. Given the condition of those still alive, social worker Ramesh remarks, "Perhaps those who died were the lucky ones." Says Nattu, who lost his little daughter, "Kamzori se mar gayi (she died of weakness)." Adds Chironi, whose son died last fortnight, "Sookh sookh ke khatam ho gaya (he just wasted away and died)." While malnutrition and consequent lack of immunity to diseases is most obvious among children, adults too are far from healthy. Three out of 10 men suffer from TB, say social workers.

Behind the Sahariyas' plight is a story of official apathy and vicious caste discrimination. Just five years ago, Baran was a lush forested district, surplus in water and grain. "The Sahariyas, once bonded labour for the rich Sikh and Himachali farmers who came in and grabbed the best land, were freed and given their own lands during Emergency. This made them self-sufficient," says Moti of Baran-based NGO Sankalp.

Between their two crops a year from their small landholdings and daily wages from labour in the fields of the rich farmers, the Sahariyas never lacked food. Forest produce and herbs fetched extra income. Children had begun going to school, some even to college. Then came the drought. In five years, the water table fell, rivers and canals dried up. The crops failed and even the forest cover began dwindling. With no food from their lands, no employment from big farmers and shrinking forests, the Sahariyas were forced to the brink of starvation.

Given the large number of central and state food aid schemes, it is hard to understand why the Sahariyas are in the plight they're in today. There are special provisions for the old, infirm, pregnant and lactating mothers, school-going children and infants. There are food for work programmes run by the village panchayat to provide employment. Even the World Bank sponsors a poverty alleviation scheme in the district. On paper, no one needs to go hungry. Ground reality is starkly different.

A perusal of the ration cards held by the villagers reveal just how official apathy has derailed pds. The ration shop owners have either denied them grain or given them far less than the 35 kg a month they're entitled to. In Mundiar village, the ration shop had not even opened until last week. Worse, the mandatory 5 kg of free grain to be distributed by the panchayat to needy families "as often as the families require" had also not been given until last week. Doctors and nurses had not visited the affected villages, despite the local administration's insistence that the tribals were ill but not starving.

The public distribution and health systems are clearly dysfunctional. No visible attempt is being made to monitor the implementation of central and state government aid programmes, with local administration officials barely stirring out of office. Moti estimates that less than 25 per cent of the grain meant for the poor actually gets to them. Only now, with media attention on Baran, have officials been pulled up. Some 10 of them have been suspended, including patwaris and medical staff.

The most vulnerable among the Sahariyas are the children below age six. This because they are denied even the nutritious mid-may meal provided by state-run schools. Technically, the children are entitled to a solid meal at the balwadis or anganwadis (creches) meant for them. But in many cases, the anganwadi is so far from the village—6 km or more—that it's impossible for mothers to take their children there. And in any case, points out Saryu of Harinagar (where 12 children have reportedly died), the handful of soyabean nuggets handed out is pathetically inadequate. Understandably then, despite a high fertility rate, the Sahariya population remains stable.

Clearly, the limited number of food for work programmes organised under the Sampoorna Grameen Rozgar Yojana are simply not enough. In Bhilkheda Bhal village, for instance, only 20 persons have found work, that too for just 10 days. In many cases, villagers have not been paid on grounds that the panchayat has not yet received funds from the state government.

Worse is the local administration's attitude. Treated as untouchables, the Sahariyas are forced to live in settlements outside the main village, called the sehrana. Asked why relief work has not begun in Matia Khera, naib tehsildar Mohan Lal says, "It's a Sahariya settlement, not a revenue village. Relief work has begun in the revenue village. Anyway, the picture is not as bad. Ninety per cent of these Sahariyas drink away their wages." No wonder the state government's Project Sahariya has become defunct.

The state government meanwhile has issued a fresh order: the sarpanch should store 10 quintals of grain for the needy at all times, each ward panch should store two quintals and a separate list of the poorest of the poor should be drawn up. A review of the below poverty line (BPL) list is long overdue. In the past five years, many families above the poverty line have slipped under. A recent study by an NGO in Bikaner, also drought-affected, found that many of the poorest families were not on the BPL list.

So, despite the overflowing granaries, a plethora of relief schemes, unending platitudes from politicians and stern directives from the Supreme Court, the Sahariyas are still going hungry. And their children continue to die due to lack of nourishment.

Trash Of The Fortnight :APBKDH etc