The Indian Express is back, their racquets dusted and swinging 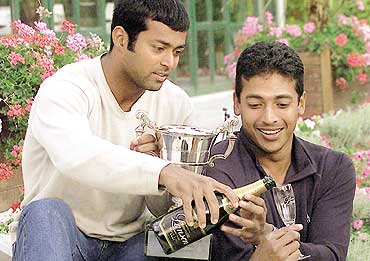 Last week, it all changed. As Paes and Bhupathi slid and skidded to a 7-6, 6-3 win on the red clay courts of Roland Garros in their French Open final against Czech brothers-in-law, Petr Pala and Pavel Vizner, to effect one of the finest career comebacks in Indian sport, tennis fans from around the world thronged the chatroom in Jayakrishnan's site. Their hopes ebbed and flowed. Gloom signs floated on the screens as Paes dropped his serve; collective sighs followed as Mahesh netted a volley. And they rose in unison with 'smileys' all around as the duo rallied from three set points down to level the set and finally win it. Surely, few Indian wins have brought as much joy as this French Open title. This was not Paes-Bhupathi's first and certainly won't be their last. But what makes this one sweeter is that they are back from hell.

Four Slams finals, two of them victorious—one each on the red courts of Roland Garros and the velvety Wimbledon grass—in a span of six weeks in 1999 made them No. 1 in the world. They were the hottest pair of world tennis—their infectious on-court hug had fans hugging each other, and they had a chest butt they could have claimed patent for. They won and lost friendly bets, pierced their ears together, ate and partied together, and, of course, took home titles together. It couldn't have been better.