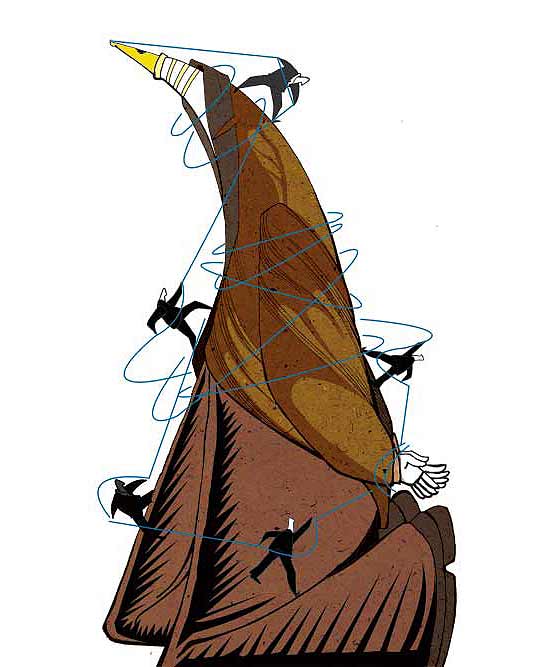 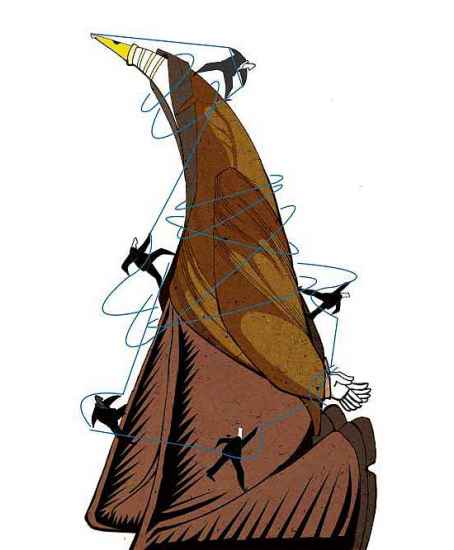 The news of the withdrawal of Wendy Doniger’s book, The Hindus, An Alternative History, and the subsequent articles and comments on the news, make it clear that the issue is not confined to just the action against this book but has relevance to other aspects in contemporary Indian life. The immediate concern is that of the relationship between authors and publishers. There was a time when publishers closely followed the work of their authors and the implications of what they were publishing. Today perhaps only a few publishers, often only the small and private ones, have such concerns. International publishing houses, or even national ones with an extensive reach, do not always know their authors that well, so invariably they are not too sensitive to the political und­er­currents of the societies where their books sell. Still, the demand for banning a book comes as a surprise. The question then is whether the publisher is willing to stand by the author and defend his/her freedom of expression. When books are treated as commodities, then profits become the prime concern.

Penguin published the unexpurgated edition of Lady Chatterley’s Lover in 1960, having successfully fought a legal charge of obscenity, but in those years it was not an international publisher. We don’t know why Penguin Books India capitulated to the threat over Doniger’s book. Nevertheless, publishers have to be reminded that they should be among the primary guardians of freedom of expression.

Unfortunately, in this recent case the law is not supportive of publishers or authors. IPC 295-A and IPC 153-A can only be described as arbitrary. They leave the field wide open for anyone to be convicted on the faintest twist of the evidence. The colonial administration needed an open-ended law by which it could ban a range of writing pertaining to identities of religion, politics, caste, race or whatever, claiming to have hurt the sentiment of some group or the other. Such a group generally claims to speak in the name of a larger community, but the views of such a community are never ascertained. It could be a small group calling the bluff of those in authority. These laws were a useful mechanism of controlling society. They have been dredged up today by those still adhering to colonial ideas and using these to create a society of their choice. Given the diversity of India, there are many groups who can claim that their sentiments are hurt by a particular opinion and can then resort to these laws.

We are however no longer a colonial society and in theory we are governed by a Constitution that is based on secular democratic principles. But many colonial period laws have been retained even where they are not compatible with the Constitution. This is either out of apathy or a disinclination to comb through such laws still prevalent in India, and discard those that are unacceptable in a democratic system. This discrepancy needs to be urgently corrected. It is imperative that lawyers and others come together as early as possible to argue for the clearing away of such laws that threaten both the intellectual life of our society as well as many social values that we would wish to make the norm.

The group that has claimed hurt Hindu sentiments this time, the Shiksha Bachao Andolan Samiti (SBAS), was earlier successful in having A.K. Ramanujan’s essay Three Hundred Ramayanas removed from the syllabus at Delhi University, and has now also charged the publisher, Aleph, to withdraw another book by Doniger on Hinduism which it had published. The intention apparently is to ban all those books on Hinduism that SBAS does not approve of. One can visualise a future when challenging books having been withdrawn and pulped, we will be left with reading only the telephone directories of days gone by, as these are unlikely to hurt the religious sentiments of anyone (although, of course, one never knows).

Publisher standing by the author? If books are treated as commodities, then profits become the prime concern.

Groups such as the SBAS are not small spontaneous organisations that spring out of nowhere, since managing the process of banning books takes time, energy and money. They are usually affiliated to political parties, or closely connected with them. In the case of the SBAS, their links are with the Sangh parivar, and therefore finance and backing is readily available. The complaint for the removal of the Ramanujan essay was followed up by a group of students of the ABVP attacking and vandalising the department of history and physically assaulting the faculty. The assault was described by one faculty member as a horrifying incident of violence. It seems that our much-proclaimed culture of non-violence disappears on occasion, as when teachers have to be roughed up. These threats, whether to the university or the publishers, that accompany the complaints of hurt sentiments ensure public attention, and the violence intimidates the recipients of the threats into submission.

Those of us who wrote the first set of NCERT textbooks were personally and individually abused with exp­letives by the BJP government during the period 1999-2004, both in Parliament and outside, supported even more loudly by those NRI organisations that invariably join this chorus. Predictably, the abuse was accompanied by threats of violence. Shades of that ambience seem to be returning, as confirmed by Mr Dinanath Batra of the SBAS, who remarked that, “Good times are coming.” The good times are clearly ominous for authors and publishers.

The demand for having books withdrawn because of the ideas they contain has generally been the activity of those whose reading of such books is so minimal as to be almost negligible. Some even state proudly that they haven’t read the book. There is thus a strong streak of anti-intellectualism in banning books. Such banning becomes essentially a political act—in the wid­est sense of political—facilitating control over the mindset of a society. The main purpose of the ban is to silence the author, and prevent the diffusion of the author’s ideas (but in fact it has the reverse effect and advances interest in the book). Addi­tionally it gives publicity to the organisation making the demand. How many people, other than members of the RSS, had heard of the SBAS prior to their recent activities ?

Surely, the more acceptable procedure would have been to do  what was traditionally done in India if there was a disagreement with an opinion or a statement in a text. The disagreement would have to be justified by argument. There was a well-known procedure of debate. The view of the opponent was set out as faithfully as possible, followed by the counter-arguments of the proponent. Subsequent to this, there would be mod­i­fications, rejections or acceptance. The argument would have been debated in detail. In the 16th century, Eknath’s Hindu-Turk Samvad was a discussion on Hindus and Muslims along these lines. Violent physical assaults solely because of intellectual differences were not called for, and as until recently, would have met with disapproval. Our ancestors were, after all, civilised people.

The logical format of discussion is impossible if education is treated as a form of catechism—the repetition of the same questions with the same answers.  Knowledge is not a body of information that holds for eternity. Every generation has to question the knowledge it receives. Some of the older knowledge may remain valid, but some may have to be replaced by new knowledge. When questions cha­nge, so might the answers. 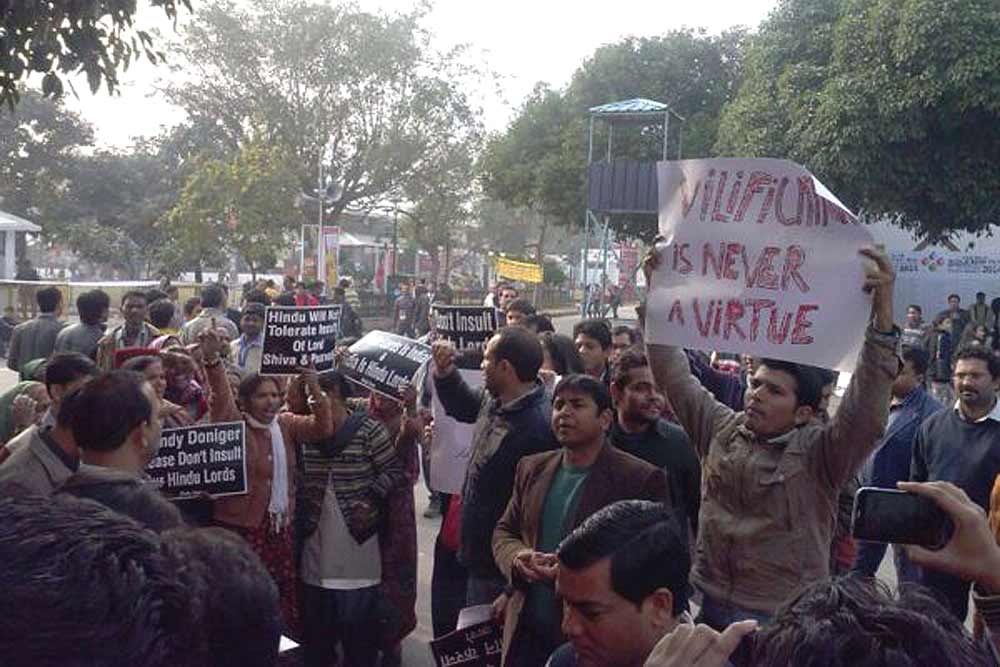 Faith cannot pronounce on the said validity or otherwise of scholarship. Everyone can have faith, not everyone is a scholar.

One expects differences of opinion and one expects them to be aired and debated openly. Displeasure with a particular interpretation of a subject should be expressed by publishing a critical assessment of the original. Pulping a book merely ensures its being pirated and published in larger numbers and its availability on the internet, as with Doniger’s book, negates the ban. This raises an issue of a broader kind that is pertinent to the vision we have of what we want our society to be. We are in a sense mutating from being a colony to becoming an independent nation. Unlike in a colonised society, in a nation, political and ideological struggles are very apparent and widely discussed. Where this ideological struggle incorporates views on religion, as in our case, the initial component of the discussion concerns the relationship of the expression of faith to scholarship.

Faith as personal belief is, as such, free and valid provided it does not impinge harmfully on another person. Scholarship draws on evidence assessed through rigorous training in which belief has a minuscule role, and instead logic and rationality control the argument. Faith and scholarship are both legitimate but are also distinct. Faith cannot pronounce on the validity or otherwise of scholarship. Everyone can have faith but not everyone is a scholar.

For the committed Rambhakt, the question of whether Ram was a historical person or not is irrelevant, as it has been for many centuries. The events described in the Ramayana may or may not have happened, since faith is not based on history. But this is not so for the historian, for whom the Ramayana is one text among many others, all composed on the same basic theme but reflecting different belief systems and social identities. The historian is interested in the degree of historicity, if any, in the texts and uses the variants to provide further dimensions in understanding the texts.

In the past, alternative narratives and readings were never suppressed. The variants represented dissimilar social and cultural patterns and were often incorporated as ways of enriching the story and their authors, as has been shown so sensitively in the essay by Ramanujan. A fundamental difference between Hinduism and the Semitic religions is that the strength of Hinduism lay in its being a mosaic of diverse sects that grew in proximity to each other with some overlaps and some demarcations. Some were orthodox and some were heterodox.

This plurality has given Hinduism its own particular kind of interface with society, in which the function of caste has not been minimal. With the arrival of the colonial interpreters in the 19th century, the beliefs and practices of multiple groups were collated and shuffled into a form, and given the label of Hinduism. Subsequently came the reformulation of Hinduism as Hindutva, eliminating these pluralities, and thus negating an essential and differentiating feature of the religion. This negation facilitates the political mobilisation for which the reformulation was intended. Reli­gion does not need to draw on history, but political mobilisation does, and in the process it sometimes has to construct its own specific version of history. Faith and scholarship go into a contrary mode.

For members of the SBAS, scholarship is extraneous to the debate, the focus being on hurt sentiments. But in fact it is pivotal, and this has to be recognised. It is this recognition that allows the debate to follow the format of the logic of discussion. There can be heavy disagreement on the Freudian analysis of a religious icon, but the analysis has to be refuted, it cannot just be barred. The refutation requires knowledge of the icon as a religious idiom but also knowledge of the theories that are being used to interpret its meaning and understand its context. Refutation, if taken seriously, involves research and scholarship. It is of course much easier to demand the withdrawal of a book and accompany the demand with a threat of physical violence. The combination brings immediate results, and these are politically useful to those endorsing the pulping of books.

(Romila Thapar is one of India’s foremost historians, specialising in ancient India. She’s authored over 30 books, most recently The Past Before Us: Historical Traditions of Early North India.)