Will the superhuman resuscitate the superstar? The jury is out on Ra.One. 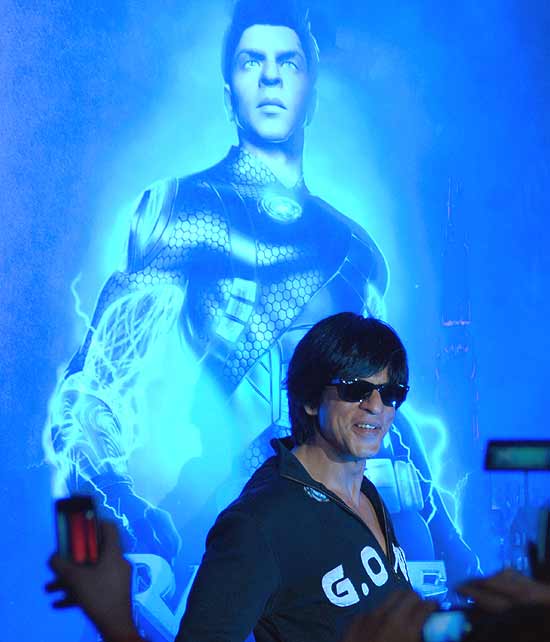 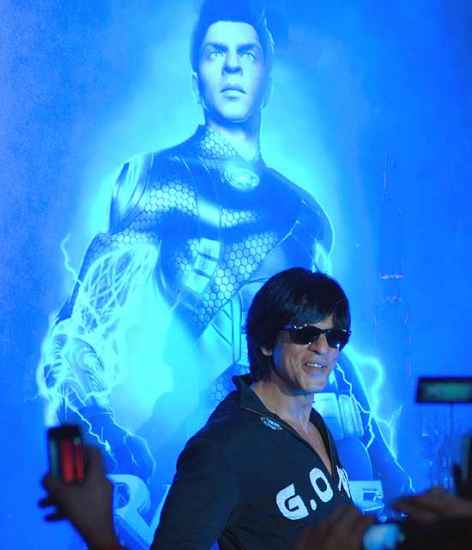 Stardom, brand value, ambition, reputation: Shahrukh’s bet it all on Ra.One. No wonder he has never hardsold a film like this one.

Filmmaker-writer Paromita Vohra, a diehard fan of Shahrukh Khan, is looking ahead at Diwali with excitement as well as anxiety. It’s the day when her favourite star returns to the silver screen after a gap of almost two years, and for the first time in the role of a superhero. Vohra has been in awe of the impulsive, exuberant Shahrukh, in love with his arched brow, deep dimples, perennially outstretched arms and sarcastic half-smile. She wonders how SRK will shed this overwhelmingly romantic image of his and reinvent himself in the futuristic body suit. “Will the superhero have traces of the SRK I love or not?” she wonders.

It’s a question on many people’s minds. Will a sci-fi film get the mothers, grandmothers, aunts, uncles, brothers-in-law—SRK’s regular clientele—to the theatres? And will the schoolkid, his teenage sister, her boyfriend—the rest of SRK’s fan base—rather watch Tron? The superstar’s high-profile brush with this new genre comes riding several such questions. Author and cultural commentator Supriya Madangarli points out how the SRK persona has not been so much about aggressive masculinity as about nostalgia, the reason why Ra.One seems a “big risk” to her. Jigna Kotheri, who has researched on two books on the SRK phenomenon, agrees that the actor has never been more daring with his image. “Will we accept him as the new superhero?” she asks.

“It’s not so much about the money as about prestige, about getting the rightful plank back,” says Anil Thakraney about Shahrukh versus the other Khans.

What they all underline is that Ra.One is Shahrukh Khan’s biggest gamble yet. The superhero genre, the mind-boggling budget, the marketing blitzkrieg, the brand value, the superstardom, Shahrukh has staked it all on the movie. Lofty in its aim—of changing the rules of filmmaking with its production values, SFX and 3D—Ra.One showcases SRK at his ambitious best. “There’s a lot riding on the film and no one else could have pulled it off as well as Shahrukh,” gushes Shahrukh’s co-star Kareena Kapoor. “He is taking audience expectations to an entirely new level,” pronounces Shailesh Kapoor, CEO, Ormax Media, a research firm specialising in media and film research. “SRK has always gone full throttle, injected energy through personal involvement,” adds adman-lyricist Prasoon Joshi. “He comes in front and takes the market head on. Ra.One is an expensive film, so the stakes are higher and he has put in a lot more than ever before.”

It is very ordinary reasons, though, that have prompted Shahrukh’s extraordinary venture. SRK is no more the lone King Khan he has been for almost two decades. In his absence from the box-office, the actor has continued to retain the No. 1 slot in the overseas market but his domestic ranking has tumbled (see graphic). The other rival Khans—Aamir and Salman—seem to have figured out their niches, but the love from the audience doesn’t seem as unconditional for SRK as before. “It’s not so much about money as about prestige, about getting the rightful plank back,” says columnist Anil Thakraney. So will his playing to the gallery match up to the masculinity of Salman and the relatively cerebral persona of Aamir? Will his Ra.One set a new benchmark for success after Bodyguard’s record performance?

“He understands the 360 degrees of the game. He is available to the consumer at any touch point,” says adman-lyricist Prasoon Joshi.

The film trade stands firmly by the star. “Ra.One will have a bumper, historic, landmark opening,” predicts trade analyst Amod Mehra. Analysts feel the film has the power to break old box-office records. “Each movie is taking the business one step ahead, six movies have already crossed the Rs 100-crore figure. Ra.One will set new benchmarks,” exults Vajir Singh, editor, Box Office India. SRK, says Amul Mohan of Super Cinema, has taken a “calculated risk”. Perhaps then the Rs 200-crore mark may not be so distant. The first weekend can make or break a film. But Ra.One will have to do more. To get back whatever is at stake, it will have to run long—and well—in theatres. It can’t afford to be a Singham or a Bodyguard which audiences can’t remember three weeks later. Ormax buzz (see box), which tracks audience awareness for upcoming films, shows that three weeks before release, Ra.One is ahead of Bodyguard, Dabangg and Golmaal 3 in recall value. There is tremendous curiosity and eagerness for it. Besides, for the past five years, there has been one big hit every Diwali. “Ra.One can potentially have an opening bigger than Bodyguard,” says Shailesh Kapoor. Add to that SRK’s overpowering equity in the overseas market, and the film could well become the second-biggest Bollywood grosser ever, at the domestic as well as global box-office. However, whether it crosses 3 Idiots and becomes No. 1 will depend on how the audience receives it and how it fares the second week onwards. What helps is that there is no film in competition. The next biggie, Rockstar, comes almost three weeks later. Bollywood films anyway are marketed such these days that they always manage to recover money. Ra.One has been “de-risked” and 60-70 per cent of its cost may well have been recovered even before the film hits the market—via satellite and music rights as well as revenues through gaming and merchandising. 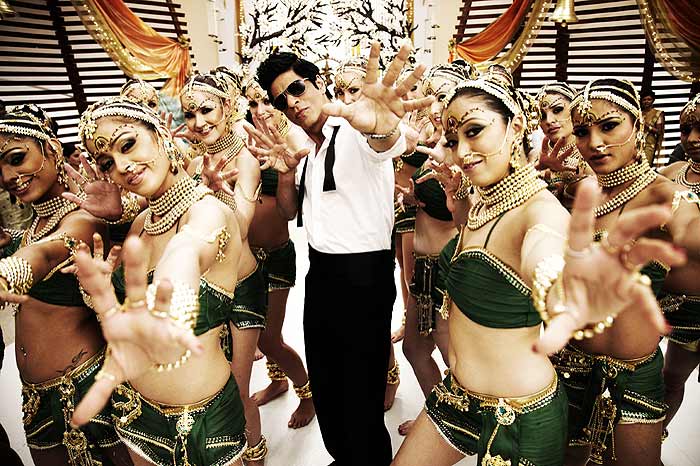 For the 46-year-old Shahrukh Khan, who has 70-odd films behind him, Ra.One is not just flamboyance and daring. He has managed, built and promoted Brand SRK in a manner that has given it an unmatched recall for over two decades now. He has also redefined stardom for contemporary times. He doesn’t just star in films but also in ads and TV shows. He has been endorsing innumerable products. He sings and dances at private marriage functions and owns the Kolkata Knight Riders IPL cricket team. SRK is not just a performer but also a producer-businessman. How seriously he has taken the second role shows in the unprecedented marketing blitz he has launched (see box). He has spread himself thin—in promo events, hoardings, endorsements and TV shows. “He understands the 360 degrees of the game, is available to the consumer at any touch point,” says Prasoon Joshi. To do so, he is exploring newer ways. He is using gaming as not just a promotional tool but a future revenue-churner. He could well have outsourced the SFX but trained people in the country to get them done indigenously. He is building the film as a franchise much as Hollywood studios do. “It’s like bludgeoning the market into submission,” says image guru Dilip Cherian.

“What if he doesn’t become anything much but just a baroque collection of various bionically marketable elements?” asks worried fan Paromita Vohra.

And it is exactly this stress on the “selling” of an idea where the danger lies. “What if he doesn’t become anything much but just a baroque collection of various bionically marketable elements? This is the biggest danger of Ra.One for me,” says Paromita Vohra. Not that SRK hasn’t faced such questions before. The folding up of srkworld.com, the flop films of his venture Dreamz Unlimited, the surgery for prolapsed disc and the legal loopholes and taxation issues around his home Mannat had caught the media’s sceptical eye.

However, the battle now is different. “There has always been an air of Teflon infallibility about him,” says adman Santosh Desai. “Till two years ago, nothing could go wrong, there was an ability to charm effortlessly.” Now he seems to be trying too hard, the jokes seem more dark and bitter than fun. Controversies have been dogging him, be it his statement on inluding Pakistani players in the IPL auction or the ban on My Name Is Khan by the Shiv Sena. He has also been hitting the headlines for the wrong reasons—for his clashes with Aamir, Salman and Amitabh Bachchan. His desperation shows, when he opts to do low-end TV shows like Zor Ka Jhatka just so that he can make money. His home productions like Billu or Always Kabhi Kabhi too have come a cropper.

Also, SRK’s stardom has been about entertainment—squarely and relentlessly—and he has been least apologetic about it. “Given the current economic scenario, an SRK film is not at risk commercially. What is at risk is meeting public expectations,” says Pritish Nandy. So will this SRK film entertain? Already, it is eliciting comparisons with Robot and Krrish. There has been unseemly talk about the Tron-like costume of G.One, SRK’s character in the film, and of its poster having been lifted from Batman. “Why do something Hollywood already does a great job of?” asks Thakraney. Cherian too thinks it’s a high-risk genre. “It is an unexplored, uncharted territory in India,” admits director Anubhav Sinha, who has bet five years of his life and career on it.

But it must warm Sinha’s heart that the film’s music is already a hit. Akon’s Chhammak Chhallo and Ben E. King’s Stand By Me-inspired Dildaara are topping charts. It may be a superhero film, but Ra.One promises just the right emotional tug. It’s being pitched as a simple film about a husband, a wife, their son and the bad guy. SRK calls it a “father-son story”. He plays Shekhar Subramaniam, a games developer who makes a robot called Ra.One (reference to Random Access Version One) because his son wants a game where the villain is more powerful than the hero. His alter ego, G.One, is a superhero with a H.A.R.T.

Ra.One comes at an important juncture in Shahrukh’s life as a star. A product of his times, he has, through all those Rajs and Rahuls, personified the restless spirit of post-liberalisation, ambitious, assertive and yet feelgood India—just as Big B’s Angry Young Man represented the angst-ridden India of the ’70s and ’80s. However, society doesn’t need a brand ambassador for consumption any more because it has already become a way of life in urban India. So where does SRK go from here? And how does he attract newer audiences without alienating loyal fans like Paromita Vohra? He has encashed his brand equity and reinvented himself as an action hero, targeting himself at the younger generation, the 8-18 age group, that may not count him in its first three favourites. He is betting on G.One as a gamechanger that may lead us to a Brand New SRK. More than anything else, with Ra.One, the new epoch in the life of a superstar is at stake.