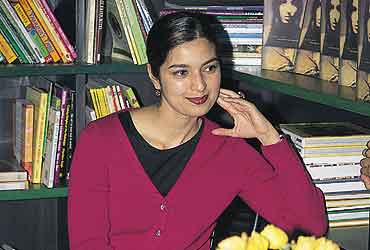 The Namesake
By Jhumpa Lahiri
HarperCollins Rs 395; Pages: 291
The protagonist of Jhumpa Lahiri’s debut novel is Gogol Ganguli, the young son of a Bengali couple who migrated to Massachusetts in the Sixties.

One evening we find Gogol in a hotel room in New Jersey getting dressed for his wedding. He is ready within minutes—it helps that his dhoti is "prepleated...with a drawstring waist". But he has to wait for his bride who is getting her hair styled professionally. Gogol "regrets not having brought his running shoes along; he could have done a few miles on the treadmill before preparing himself for the event".

The Namesake is full of such moments, which, when American readers find them in books by Indian writers living abroad, they take as evidence of two different worlds coming together. The East meeting the West.

The truth, however, is that people everywhere inhabit mixed orders of reality. Consider a turbaned, sherwani-clad bridegroom in a village in Bihar, with a sword on his side, arriving for his wedding on a Massey Ferguson tractor.

This mixed condition could be taken as a given. But it isn’t—not only by many of Lahiri’s readers but also by her characters.

Gogol takes as fundamental the division of the world into the India that his parents left and the America where he was born. By the time the book ends, he has revised his views and thinks of his parents and the choices they made with a great deal more affection and respect. He has grown older, and matured, through his encounters with love and also loss. Gogol’s achievements appear real—but you are likely to feel a lot less sympathy for his problems when you take note of his circumstances. He was born in Cambridge, Massachusetts, he received an Ivy League education, he doesn’t like his name, and he feels ashamed that his parents have no taste for good conversation or fine wine. The fact that he changes his mind about all this might be exciting stuff only if you don’t regard him as that conflicted figure recognised by the disparaging acronym ABCD, American Born Confused Desi.

Lahiri’s novel is narrated in the historical present tense, as if to say that it is the story of those for whom the past is still not over. Her language is sensuous and her use of detail evocative. In her Pulitzer prize-winning collection, The Interpreter of Maladies, the stories set in India were weak and banal in their predictability, while those located in America were distinguished by a surer sense of language and setting. That technical mastery is once again in evidence in The Namesake.

Here, for example, is Gogol’s reminiscence of a childhood death: "He remembers when his paternal grandfather died, sometime in the seventies, remembers his mother screaming when she walked in on his father, who was shaving off all his hair with a disposable razor. In the process his scalp had bled in numerous places, and for weeks he had worn a cap to work to hide the scabs. ‘Stop it, you’re hurting yourself,’ his mother had said. His father had shut the door, and locked it, and emerged shrunken and bald. Years later Gogol had learned the significance, that it was a Bengali son’s duty to shave his head in the wake of a parent’s death. But at the time Gogol was too young to understand; when the bathroom door opened he had laughed at the sight of his hairless, grief-stricken father, and Sonia, just a baby, had cried."

What we have above is the essence of immigrant writing, offering in a new land the shock of discovery, discovery of what would otherwise have been dead custom, neither capable of moving anyone, nor likely to ever appear strange and thereby incite laughter or fear.

Gogol’s "good name" is Nikhil. His "pet name" is inspired by his father Ashoke’s sentimental fondness for the famous 19th-century Russian writer, Nikolai Gogol. This fondness is, quite literally, accidental. Years before his son’s birth, Ashoke was reading the Russian author when the train in which he was travelling went off the rails in Bihar. The injured youth was about to be left for dead when a page from his book, still clutched in his hand, fluttered in the breeze and caught the eye of the rescuers.

The original Gogol wrote masterpieces like The Overcoat, the story of a poor clerk who buys a new coat which is then stolen from him. Gogol mixed fantasy and satire to mock the pettiness of bureaucrats. It is difficult to guess whether he would have relished his own transformation, thanks to Lahiri, into his namesake who shares none of his social vision and whose private rebellion amounts to turning his back on learning "that one does not grate Parmesan cheese over pasta dishes containing seafood".