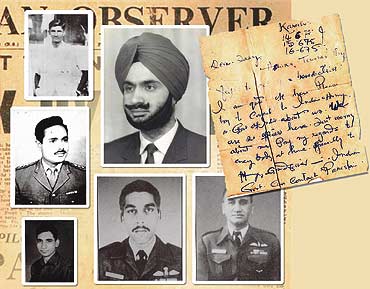 outlookindia.com
-0001-11-30T00:00:00+0553
Last week, during External Affairs Minister Pranab Mukherjee's visit to Pakistan, when President Pervez Musharraf invited the families of Indian Prisoners of War (POWs) to come to Pakistan and search for their loved ones, hope rose anew in their hearts. The families had been urging the Indian government to take up this issue yet again with Pakistan ever since August 2005, when Sheetal Das Kaler, secretary, South Asian Human Rights Group-Canada Chapter, told a newspaper that he had learnt about 30 urns of ashes of Indian POWs kept in Kot Lakhpat Jail, which he had visited in 2004. Kaler also said that some families of POWs sought his help, but he was unable to meet any of their kin in jails as he was only permitted to meet Sarabjit Singh (the Indian "spy" sentenced to death).

Relatives of missing POWs then got in touch with the group's president, Harpal Nagra, who said a delegation from his organisation, including one turbaned Sikh, had visited the jail in connection with the Sarabjit case. When the Sikh delegate saw an old man, thin and frail in his 70s, he wished him 'Salaam Aleikum'. The prisoner in turn replied, "Wahe Guruji Ka Khalsa, Wahe Guruji ki Fateh" and told him that he was imprisoned along with other Indian military personnel for decades and not allowed to make contact with outsiders. He said they were forced to convert to Islam and that there were around 400 Indian prisoners, along with 1971 war POWs, in various jails in Pakistan.

For the relatives, this is yet another bit of evidence that their loved ones have languished in Pakistani jails since the '71 war ended, despite repeated denials by Pakistan. It's a 35-year-long saga which refuses to die with the ghosts of the past, and, with fresh evidence, is now being pursued by grown children of missing defence personnel of the 1971 war. Though Musharraf's offer is being seen by most relatives as "the last chance" to find—or at least get definitive news about—their missing kin, most feel that the exercise will be fruitful only if the Pakistan government is sincere and transparent in helping them conduct their search. Musharraf had made a similar offer in 2001 soon after his Agra visit, but the matter was not followed up. Earlier, in 1983, during Gen Zia-ul-Haq's regime, six relatives of POWs were permitted to go to Multan jail, but that visit brought heartbreak. Says G.S. Gill, brother of Wg Cdr H.S. Gill, "When we went in 1983, the then foreign minister Narasimha Rao told us, 'Go get our men. They may not be in a good condition.' But the persons shown to us in jail were those whose repatriation had already been cleared. The jailer, however, disclosed that the people we were looking for were somewhere else. If Musharraf's offer is genuine then they should show us all Indian prisoners in captivity, in whichever institution they might be." The Missing Defence Personnel Relatives Association (MDPRA), formed a few years ago, feels the government arranged to send them in 1983 only because it had sufficient evidence about the POWs.

This time, if things come through, the families want human rights NGOs from both sides to be associated, as also officials from the MEA. Says Simi Waraich, whose father Maj S.P.S. Waraich is one of the missing, "We are willing to forget what happened 35 years ago, and want it to be treated as a humanitarian issue. My father would be in his 70s now and it is our last hope. Even if they are dead, we need to know. At least we can mourn them instead of praying for their return."

Though Pakistan has consistently denied the existence of POWs in its custody, contrary evidence keeps surfacing from time to time. In the initial years after the war, letters like the one sent by Major Ashok Suri to his father in 1975 pointed conclusively to their presence. In later years, debriefings of intelligence agents or prisoners who returned after serving their sentences also added to the existing mound of evidence. For example, Roop Lal Sahariya returned in 1999 and told the government that he saw Maj Suri in Kot Lakhpat jail. In 1988, Mukhtiar Singh was repatriated from Pakistan and brought a message for Sepoy Jagir Singh's family that their son was alive. He also mentioned seeing Capt Kamal Bakshi in Multan Jail around 1983. In 2000, Manish Jain, the son-in-law of Sqn Ldr M.K. Jain, met Col Asif Shafi of the Pakistan army in the US. Col Shafi, who spent seven years in Pakistan jails for conspiring against Bhutto, told Jain that till 1978, he and Wg Cdr Gill shared the same cell in Attock jail. General Chuck Yeager of the US air force, an American flying legend, has written in his autobiography (1986) about interviewing about 20 Indian pilots of the 1965 and 1971 wars who were lodged in Pakistani prisons. (The Americans were interested in finding out more about the Russian planes in the IAF). In a 2005 meeting with Manish Jain, Yeager confirmed seeing around 20 Indian pilots in Pakistani prisons (of the 54 missing personnel, 25 are pilots). "We have often been told by the government that they too know the POWs are there in Pakistan but nothing much can be done because Pakistan does not acknowledge it," says Simi. Most returning prisoners say the defence personnel are generally separated from others. Balwan Singh, who returned in 1998, also reported seeing some personnel of the 1971 war, and said they were being rotated across seven jails.

In February 2004, Pakistan's interior ministry had tabled a report in parliament about 182 Indian prisoners since 1971. Are some of them the missing POWs? Who are these people? "When we pursued the matter with the Indian ministry of external affairs we were told that Pakistan is denying the report. A copy of the report is also with the Pakistan Human Rights Commission," Simi told Outlook.

"If Pakistan today claims that our missing defence personnel are not present there under any category, even as mentally deranged prisoners, it is up to our government to do something more than accept Pakistan's word," says the MDPRA. "All along Pakistan asks us for fresh evidence and dismisses earlier evidence as insufficient. We would now like to ask them to provide evidence that our men are really not there in their custody," says a weary Gill.

In 2005, two Chinese POWs from the 1962 war were found in a Ranchi mental asylum and repatriated by the government after 43 years. In this season of renewed Indo-Pak friendship and peace processes, will there be succour at last for family members of these 54 missing Indian defence personnel?