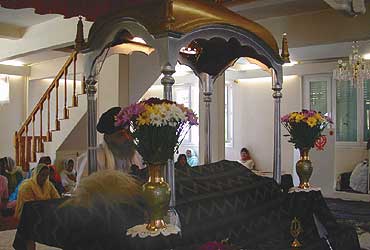 outlookindia.com
-0001-11-30T00:00:00+0553
Hindus and Sikhs in France are accusing the authorities of denying them the right to practice their religion in a "proper and traditional manner." Despite several attempts, Paris and other cities have turned down their requests for building a temple or gurudwara, or even a structure resembling these. Consequently, Indians here have taken to installing idols or other religious symbols at rented houses for community prayers. Says an angry Mukesh Chauhan: "You find thousands of beautiful churches all over France. We, too, would like to have a place of worship that is beautiful and resembles what a temple should look like, rather than converting a house into one."

But now even these temples-in-houses are being opposed. For instance, the Sikhs have been keen on shifting to a spacious building for some time. But its two-year search has proved abortive. Says Sikh leader Chain Singh: "Whenever we do find a suitable place, the landlords are not interested in renting the premises to us for establishing a gurudwara." And those who are willing, face opposition from Parisians. Recently, they vehemently protested in a neighbourhood where the Sikhs had signed a contract to rent a building for a gurudwara, openly equating them with the Taliban.

Community leaders also claim the authorities have been exploiting an insidious law under which the government has the first right to any property on sale. They invoke this law to ensure that a house isn’t purchased for religious purposes.