With elections around the corner, a climbdown on VAT, labour reforms et al was perhaps only to be expected. The Hindu rate of reform seems on track. 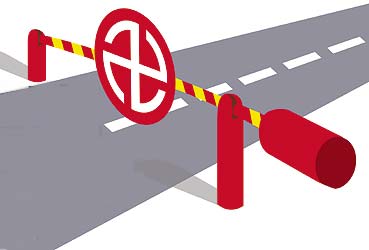 outlookindia.com
-0001-11-30T00:00:00+0553
Budget and deficits are hard economic issues, right? Wrong, they are all about politics. On April 24, finance minister Jaswant Singh, while replying to the Finance Bill debate in Parliament, retraced his steps on the contentious value added tax issue. "A poorly implemented VAT won't work. Therefore, VAT cannot be implemented unless all states adopt it together," he concluded, clearly green-signalling a long delay in its implementation. Even as a stunned Ashim Dasgupta, West Bengal finance minister and chairman of the empowered committee of states on VAT, rolled out a hurt rejoinder the next day, as far as the Centre was concerned, the issue was closed. The government, with an eye on the October polls in Delhi and three other major states, gave in to its loyal and considerable electorate. And one of VAT's biggest critics, the trading community which forms one of the bjp's chief constituencies, won hands down.

Says Jairam Ramesh, member of the Congress party economic cell: "VAT is the worst example of short-term political considerations—more precisely short-term Delhi politics—forcing the central government to openly backtrack on an issue that's vital to the economy. It's a sordid state of affairs." Adds a senior North Block official: "We have given new meaning to Lenin's famous strategy of one step forward, two steps back. That's how it's going to be till the next general elections. As for VAT, well, we can spend this year preparing for it well." Why only VAT, in the past couple of weeks, the government has shown its confused face on a whole bunch of issues on the active agenda of liberalisation.

It all began with the rollback of the fertiliser subsidy cut. Then came the famous FDI disagreement. On April 23, all three ministers whose portfolios were to see a rise in the FDI cap, along with the Swadeshi Jagaran Manch and the Shiv Sena, opposed the issue by saying it would go against domestic concerns. Telecom minister Arun Shourie, himself a staunch champion of privatisation, said raising the cap from 49 to 74 per cent would endanger national security. Civil aviation minister Shahnawaz Hussain's objection was that it would hurt the interests of the state-owned carriers—taken off the privatisation list recently. And although privatisation is on in the petroleum sector, the minister Ram Naik felt the industry still was of strategic importance. It was also argued, somewhat contrarily, that since FDI flows were not significant, it'd be useless to raise the caps! Says Swadeshi Jagaran Manch convenor Muralidhar Rao: "Our reforms agenda is packed with external issues, without any concern for the domestic economy. How can you welcome FDI even after Enron? What have the mncs contributed to our economy or exports? What are the new technologies we've acquired?"

On April 24 again the Lok Sabha was riven by the disinvestment issue, raised mainly by the Left parties and the Congress but led by nda constituent Shiv Sena. Attacked from within, the government hastily agreed to a discussion on the subject. The cautious fielding only strengthens the feeling that while the ongoing privatisation will carry forward, it will be at a snail's pace so as not to attract any controversy. So new decisions will most likely be postponed to next year. What this might do to the Rs 13,200-crore Budget target for disinvestment is, well, anybody's guess.

All this was accompanied by yet another meeting of the Employees' Provident Fund (EPF) trustees' board, whose chair is traditionally the labour minister. For the nth time, Sahib Singh Verma failed to convince labour leaders that EPF rates need to be reduced and allowing them to remain at a tax-free 9.5 per cent, or 60 per cent higher than the risk-free 10-year government bond yields, was actually throwing the huge fund corpus to future risk! Says Bharatiya Mazdoor Sangh (BMS) president Harshbhai Dave: "We don't want to make it a prestige issue.But how can we allow a climbdown to eight per cent? A lot will also depend on the government decision on sds."

The sds, or the unsecuritised special deposit scheme of the central government, accounts for 80 per cent of EPF investment. Extended twice, the government has finally taken a decision to wind up the Rs 1,21,000-crore corpus on June 30, so far used to fund the fiscal deficit. However, as per latest developments, the money will not be returned to the PF body but reinvested in a fresh deposit scheme. If the new scheme decides to pay the market-related interest rate, the yield on EPF has to go below 6 per cent, a figure unacceptable to labour leaders. On the other hand, if the government decides not to upset organised labour, it has to fix an interest rate of 8-9 per cent. Which means that the government introduces another guaranteed return scheme other than the senior citizens' pension scheme. Needless to say, all this goes against the grain of the Fiscal Reform and Budget Management Bill, 2000, which is set to be passed by Parliament.

The intransigent face of labour has also pushed back taking up of labour reforms by Parliament, especially the changes proposed by the 2001 budget with regard to hire-and-fire and contract labour. Says BMS' Dave: "Before we pass any labour bill, we need a proper discussion. That's all we are saying. We have to follow the Second Labour Commission recommendations. At a time when unemployment is rising, especially in urban areas, how can you allow a hire-and-fire policy? There will be only fire, the hire will happen after five years."

In fact, the economic slowdown of the past few years has only made labour's demand list longer. Dave says they are now demanding a higher 65-day-wages retrenchment compensation, lifting of the upper ceiling on minimum wages and bonus and 30 days' gratuity for all workers. Says a senior Opposition leader: "I think labour leaders, who are trustees of EPF, are more rigid than Verma."

So, is the turn of events surprising? Definitely not, say most experts. "The reforms thrust is over, the issue was the momentum," says icrier director Arvind Virmani. "The resistance started about a year ago, just before the ouster of Yashwant Sinha. Now even the growth momentum has petered out. What is happening to disinvestment reminds me of windshear—a phenomenon in aviation that stops planes from lifting themselves beyond a point. Disinvestment had reached the take-off stage when it hit the windshear."

A senior Planning Commission official points out: "As far as the current agenda is concerned, the government has surely gone into election mode. But then, we haven't had anything new on the reforms agenda since 1996. There is always talk of the second generation of reforms, but it assumes that the first is over. Far from it." A top finance ministry official rationalises it: "Any reform that has short-term political costs cannot and will not be taken up. But, yes, we can go ahead with the pending legislative business, the Electricity Bill is a very important step, financial reforms are progressing well, the tax administration reforms suggested by Kelkar are on, the pension body will also come in due course, though it will take some time."

In fact, gradualism in Indian reforms has become a subject of study in major international universities. Former finance secretary Montek Singh Ahluwalia wrote recently that "the evolution of policy in this area (privatisation) reflects the very special type of gradualism that has characterised many reforms in India...a 'one step at a time' process in which the full extent of change was not clearly spelt out initially. Indeed, even the intention to take further steps was denied. At times, it was also a reflection of political expediency...."

Therefore, the Indian way of reform, which University of Maryland professor Arvind Panagariya calls the Hindu rate of reform, is different from gradualism as accepted in liberalising economies, where there's a deliberate sequencing of events, as we did with deregulation of the oil sector for instance. "The advantage," says Ahluwalia, "is that it makes it easier to develop a gradually moving political consensus in a highly pluralist and noisy democracy." Indeed, senior North Block officials say that's the only way things can be done in India, the future be damned. So, India's tariffs are still over three times higher than Asian economies like Indonesia, Malaysia, the Philippines and Sri Lanka, while our per capita income is half of China's. Without government efforts to maintain growth momentum by cutting useless spending, manufacturing—a big hope for jobs—stagnates. Virmani thinks full small-scale industry (SSI) dereservation is needed to give an immediate boost to manufacturing. "The way we are doing it will take 10 years for us to get over the reserved items list!"

The second uniqueness, rather the second tragedy of the Indian reforms process, is that of eroding internal support base. The same malady had dogged the Congress (Narasimha Rao) government that inaugurated the liberalisation programme. Virmani explains: "The critical thing is not the opposition...that will always be there. But to tackle it, you need to see that the credibility of the decision-making process is intact. That has got completely eroded now. A pity, because this government started out with really important steps. Look at telecom reforms. Even disinvestment was rolled out by them."

In fact, there's an 80-point priority agenda pending before the cabinet committee of reforms which shouldn't take much sweat to roll out. Vetted by the Planning Commission, it involves a lot of uncontroversial legislative and administrative changes which will make life easier. For instance, the Indian Postal Reform (amendment) Bill 2002, reforming the Land Acquisition Act or removal of the Essential Commodities Act. As also issues that smoothen the ground for further reforms, like removal of inter-state barriers to trade, and a civil aviation policy. This is accompanied by another 100 items for individual ministries to push through. Agrees Jairam Ramesh: "These things take time in our polity. Trouble is, people now demand more. The general public's expectation from the government has gone up."

Meanwhile, is anyone thinking of the economy? Except in exports with an average of nine per cent growth over the past two years, and industry which has clocked around 6 per cent, nothing much is happening. Says Panagariya: "It's a pity we aren't moving forward faster. In the 21st century, election mode should mean more, not less, rapid reforms. But alas, we are captives of our fate: we may escape the Hindu rate of growth but not the Hindu rate of reform!" ICRA economic advisor Saumitra Chaudhuri disagrees: "In all the sectors untouched by government, we are doing very well, thank you. Everything depends on how last fiscal's estimates turn out. If it's 5.5 per cent, we'll get 6.5 per cent in 2003-04. That's okay in the prevailing circumstances." Virmani, on the other hand, feels we'll have to wait for 2005 for the big push to the economy. Till then, happy reform holiday!

Red Ants In Their Whey