Stars survive in a wispy, staged world. Politics is too real. 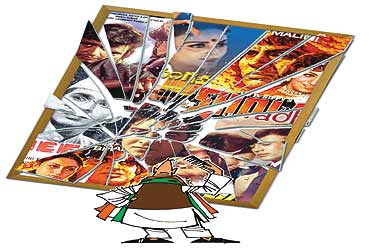 outlookindia.com
-0001-11-30T00:00:00+0553
Actor Manoj Kumar, like former matinee idol and Congress MP Rajesh Khanna, is, incredibly, still alive. Both survive apparently on a steady supply of scotch and DVDs of their old movies. Clearly they are confined to a customised ICU of sorts.

What do heroes do when they grow old? The tragic ones turn their own ghosts with wispy hair and whistling breath. The comic ones fulfil prophecies made before they were born—Oedipus vexed?—and become MPs. Meimber of Da Haaze. Desh ke Neta. The Smiling Mr Falu, as one of the lesser Bangladeshi politicians is called. The really lucky ones—and the more ambitious—are from the South. They get to be chief ministers, as in the case of N.T. Rama Rao, M.G. Ramachandran or Jayalalitha. Or Rajnikanth ("Super Star, Rajni Saar"), waiting in the wings. The fading stars transmigrate—wig, rouge and collapsible soul—into kurta-pajamas, and begin their second stint in histrionics. And, in no time at all, they realise that politics too, like Hindi cinema, is without a plot. The difference is this time around the stars get to play themselves. 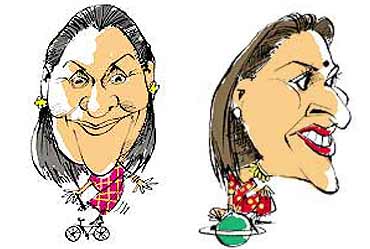 When Indian stars turn politicians, the result is almost always puzzling. What are they up to out there in the real world and without a make-up man, too? They don't say much, of course, either in the House or out of it. And what they eventually do say makes not much sense. Dilip Kumar, Rajesh Khanna, Hema Malini or Jaya Prada; Jaya Bachchan, Vinod Khanna or Govinda. It's a safe bet that you can't recall anything they ever said. The one time that Dharmendra—Bollywood's best comic actor ever, and now a member of the Lok Sabha—came on TV, all he said was that he would like his daughter Esha to stop acting and settle down. That statement is just not good enough to change the class equations in the country. Stars, though, manage to win elections most convincingly as, for instance, Amitabh Bachchan did in 1985 from Allahabad on a Congress ticket. But the victory does not mean anything in terms of real politics. 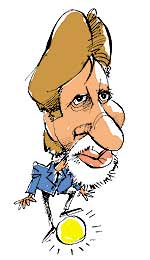 Having spent a lifetime lucking out on make-believe, Bollywood stars don't feel they are real, except when they see themselves reflected. The star sees the silver screen as a giant mirror. And there he can even fall in love. The mirror is the indispensable aphrodisiac that helps him to fall in love—with himself. For a star, the mirror is at the heart of things. He would quite simply die in a mirror-less world, in a world that does not beam back his own image.

The world around the star is thin, peopled with objects that are not connected with each other. Not only are the objects separate, there is little to explain their presence, just as in an elaborately meaningless set that might at any time erupt into a vast orchestrated ritual of gleaming bodies in orgasmic rhythms. There is an acute absence of logic, of cause and effect, as well. What you do or speak has no real relation to what can transpire. A star can only be. He doesn't mean anything. That's why most stars when they turn politicians become totally without credibility. 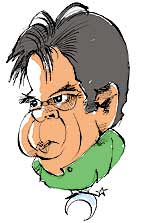 A large proportion of Indians are very young. Most of those who read this piece, therefore, may not have seen a movie called Kranti released in 1981, produced and directed by Manoj Kumar, who despite playing Bharat in Hindi movies, did not graduate to Parliament. Which is just as well. Both off-screen and on-screen he was an eloquent if affected mumbler. I guess he was trying to emulate the charismatic actor, Dilip Kumar. Unfortunately Manoj Kumar didn't have the talent. The little chance he might have had to pull it off was pre-empted by his mannerisms. If, for example, you asked him his name in a movie, Manoj Kumar would turn his face away from the camera, and you, wrap his hand around his mouth and then mumble: Burrat. Still, Manoj Kumar's political movies tell you something about Bollywood's guiding principles, and Kranti is a classic case.

The story and screenplay of Kranti are by none other than the reigning poet laureate of Bollywood, Javed Akhtar. The period is the 19th century, and the story tells of the private war of two men, Sanga (Dilip Kumar) and Bharat (Manoj Kumar, who else?) against the colonial British power. Kranti, which means revolution, is a hilarious movie, even at its most ominous and dramatic moments.

One such moment, a trigger point, it turns out, for the amoebic plot, occurs on a dhow on which are chained to pillar, post and flagpole krantikaris like Manoj Kumar and his friends. The sea is stormy. The British soldiers—who in reality are Indians in ornate wigs and uneasy beards—are on the verge of shooting the prisoners. It's pouring, and Hema Malini (also a freedom fighter in addition to being Princess Meenaxi) has been let loose on the deck. Her hands and legs though are tied in a complicated knot which makes transport possible for her only by sinuous writhing along the floor. Meenaxi is singing a meaningful duet with Bharat. Her clothes are clinging to her body, and all her movements are an invitation to the guards to fornicate forthwith. The guards are not reacting as they are civilised to a fault. They are British, remember? No other nationality can withstand such wanton onslaught on the senses. It's clear from their mystified features that as soon as the song is over, they will shoot her and put an end to their misery. The song itself is pretty long and rhymes wetly. 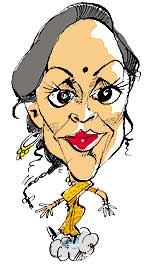 In no world known to man can this situation be obtained. No one sings before a firing squad. And definitely not a person with limbs twisted in a knot, rolling along the deck of a dhow tossing in the high seas. It's an act of levity disproportionate to the attendant circumstances. Every cell in your body wildly negates the viability of this world. Yet, this is Bollywood. Yet, Kranti was a hit.

Both Princess Meenaxi and Sanga went on to become MPs. But the world they come from, as shown in Kranti, is clearly an extraordinary one, for the simple reason that logic has no real function in it. In short, logic fails. Almost all the stars who later made a career in politics share this background, in which one dimension of the mind is missing. It's as if Bollywood is a factory specialising in the production of generation after generation of specially challenged people.

It's not hard to figure out why political parties go out of their way to woo star-candidates. They are popular. But the parties know the stars shining—a little dimly now, thanks to wear and tear—from their firmament mean nothing. They are like tinsel. Just for show. But in a politics that mimes movies so closely, what more can you ask for?