The cold war over the hottest chilli in the world 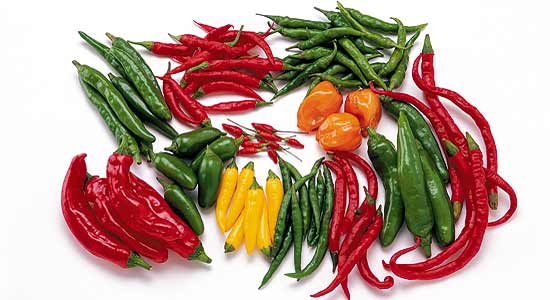 It was a tasty newsbyte 10 years ago: “Tezpur Chilli Hottest in the World.” According to reports at the time, four Indian scientists had found a northeastern chilli rated at 855,000 Scoville units—a forest fire of piquancy compared to the feeble flame of the next contender, the Mexican Red Savina Habanero (a mere 577,000 Scoville units). The Scoville rating measures the quantity of capsaicin, a compound that binds with pain receptors ordinarily triggered by heat and abrasion.

For a nation poised on the verge of economic liftoff but still hungry for global recognition, it seemed like the redressal of a historical wrong. It was the colonial invasion of the South American capsicum species that upstaged Indian black pepper (or Piper nigrum) as the hottest commodity on the planet. We welcomed it graciously of course, and even pretended it was a relation of our kaali mirch (black pepper—chillies are laal mirch or red pepper).

In time we became the world’s largest producers (and consumers) of the chilli. And now, at last, Indian nature (and 500 years of nurture) had won out. A local cultivar, Capsicum frutescens var. Nagahari, aka the ‘Tezpur chilli’, had restored our historic title as the hottest real estate around. 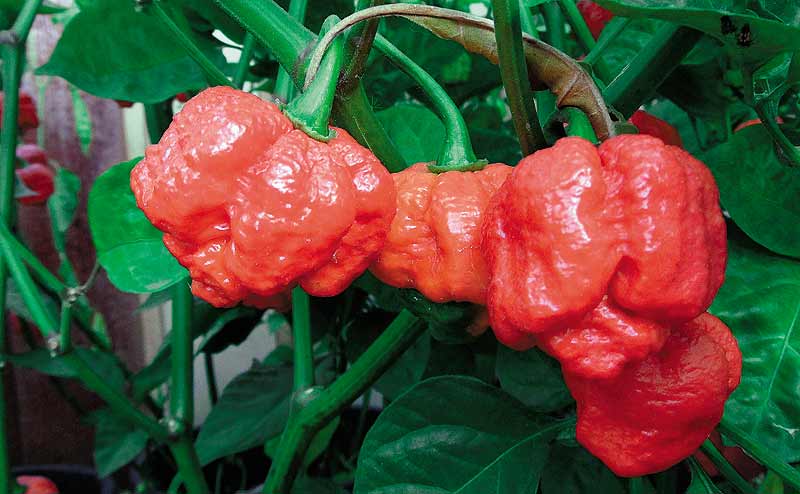 This year’s model: the Trinida Moruga Scorpion has just been declared the hottest chilli.

The samples in question came from the Assamese town of Tezpur (which, felicitously, can be rendered as ‘Spicy Hot Town’), but the variety was familiar in many parts of India’s northeast by several terms denoting mostly fear and respect, including Naga Jolokia, Bhut Jolokia or Bih Jolokia (‘Serpent chilli’, ‘Ghost chilli’ or ‘Poison chilli’ in Assamese), Oo Morok (‘Tree chilli’ in Manipuri), Raja Mirch (‘King pepper’ in Hindi), Pasa Kala (‘Chief chilli’ in Mishmi). At any rate, the research was published, a chilli paper, as it were, in the journal Current Science with many diagrams showing the Tezpur chilli’s capsaicin readings going off the charts.

Then the alarm bells started to go off as well. Sceptical chilliologists insinuated that the Indian research was flawed, that our instruments were poorly calibrated. They deplored the “constant nationalistic tone” of our scientists, who it turns out were working for defence research laboratories. Worst of all, they whispered, that we had once again cherished a culinary cuckoo. The Tezpur chilli, it seems, may be just another variant of Capsicum chinense. What don’t they make in China these days?

Actually, Capsicum chinense is not remotely Chinese. All chilli pepper species have an acknowledged South/Central American origin, indeed the term ‘chilli’ itself is derived from the Nahautl chi-li. Apparently, the Aztecs had a glyph for it too. But the nomenclature of chilliology is littered with geographical confusions and non-sequiturs that go back to Columbus sailing west to find the Indies and pepper, and stumbling on the Americas and chillies instead.

Don’t try this at home: child discipline with chillis in the Codex Mendoza.

His first taste came in 1492, from the Taino of the West Indies, where he duly noted in his log: “There is also plenty of ají, which is their pepper which is more valuable than black pepper, and all the people eat nothing else, it being very wholesome”.

A hundred years later, the English herbalist John Gerard was still confused: while recommending the cultivation of chilli plants in hot horse manure in his Herball or Generall Historie of Plantes, he says it is known as “Piper Indianum or Indicum or sometimes Piper Calicuthium or Piper Hispanicum; in English it is called ‘Ginnie Pepper’ and ‘Indian Pepper’; in German, Indianicher Pfeffer; in low French, Poivre d’Inde, very well known in the shops at Billingsgate by ‘Ginnie Pepper’, where it is usually bought.”

Similarly, the capsicum species chinense, got its name from an 18th-century Dutch botanist handling Caribbean chilli seeds he thought had come from China.

It’s a funny old world. The peculiar thing is, that although the European colonisation of the world (at least in it’s first Iberian phase) was driven in good part by the craze for Indian (and I mean Indian Indian) pepper, the white people really never took to the chilli pepper they discovered in the process. What they did do was sell it to the good people of the East who found many excellent things to do with it. 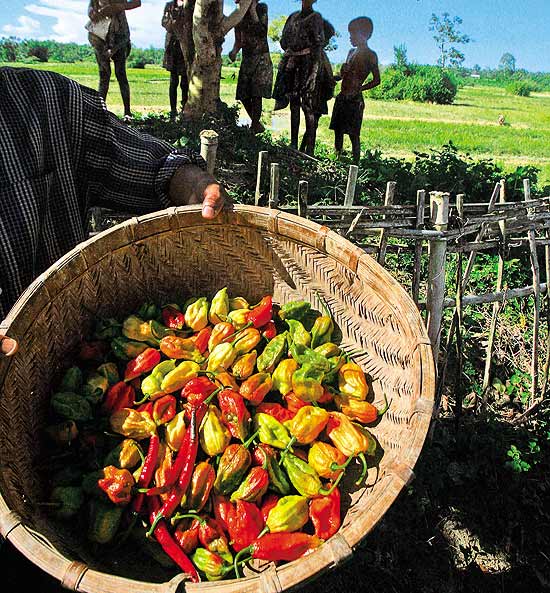 Well, not all of them were entirely excellent. Or even good. The capsicum family has certain innate punitive possibilities, as the Aztecs themselves recognised. The 16th-century Codex Mendoza famously illustrates an Aztec father disciplining his child by holding it over a fire of smoking chilli peppers. Here in India, we took it a little further. Let me share with you a cheerfully instructive passage from a columnist who specialises in criminal forensics:

Chilli powder is often used by police in our country—and in fact in several third-world countries—to extract confession from criminals. It may be introduced in the mouth, nose, anus, urethra or vagina to torture a suspect and extract confession from him [or her, presumably]. It is said that during Emergency in India [the 21-month period of extra-parliamentary rule by then prime minister, Indira Gandhi] in 1976, chillies were used as a means of torture by introducing them in rectum! This process was known as ‘Hyderabadi Goli’... Finally, in our country, chilli powder is often introduced in the vagina as a punishment for infidelity. (‘The Poison Sleuths: Poisoning By Capsaicin,’ by Dr Anil Aggrawal, Science Reporter, November 1997)

It is true, by the way, about the Hyderabadi Goli. Back in the 1970s, our security forces believed the hottest chillis in the country came from Andhra Pradesh, of which Hyderabad is still the capital. The Hyderabadi Goli was notoriously administered using a policeman’s cane slathered with mustard oil and chillis.

But Indian law enforcement has come a long way since then. When the boffins of the Defence Research Institute discovered the world’s hottest chilli in the year 2000, their intentions were more humane:

Chillis as a natural product have been a subject of study for pharmaceuticals, food industry and for law enforcement since the past few decades… Oleoresin capsicum (OC) is less potentially lethal than its synthetic counterparts, orthochlorobenzalmalononitrile (CS) and chloroacetophenone (CN). It is environment-friendly and much safer than CS or CN… Use of OC powders is growing and it is predicted to dominate the market in the coming years as the mainstay of riot control agents. The objective of our work was to find out a chilli which contains maximum capsaicin and dihydrocapsaicin, so that both can be extracted from it to be used as OC or as powder after isolation. (‘The Hottest Chilli Variety in India,’ by Ritesh Mathur, R.S. Dangi, S.C. Dass, R.S. Malhotra, Current Science, 10 August 2000)

And, like latter-day Columbuses, they celebrated their triumph in discovering Capsicum frutesens var. Nagahari, concluding “Thus we have identified the hottest chilli variety in India,” when in fact they had conquered the world.

It’s true they did point out in passing that their chilli “seems to be the hottest chilli known so far.” It did them little good. Their findings were met by hostile consternation and disbelief in the strange new world of chilli fanatics.

Although northeastern Indians had been placidly consuming the world’s hottest chillis for generations, it was now tiny cults of Western ‘Chilliheads’ who were making the biggest noise about chilli peppers and hot sauces on countless websites. These self-proclaimed chilli aficionados seem driven more by masochistic machismo than culinary concerns.

And they have fuelled an industry devoted to acts of self-harming capsaicin consumption with products titled ‘Dave’s Ultimate Insanity Sauce’ or ‘Blair’s Possible Side Effects’ or ‘Rectal Rocket’ and even bottles of pure capsaicin crystals delivering lethal Scoville counts of 16,000,000 or more, for prices ranging into hundreds of dollars. This was not an industry inclined to embrace the fact that millions of people in a third-world country had been quietly besting them—more or less for free. Inevitably, it was only when the Indian chilli was appropriated by an English gardener as the ‘Dorset Naga’, that acceptance began. In the end, it was an American Amerigo Vespucci, one Dr Paul Bosland of the Chilli Pepper Institute at New Mexico State University who would take the credit for discovering the Naga Jolokia’s potency by confirming the very same chilli as the hottest in the world in 2006, and then earning a Guinness World Record for his research. And, of course, the chilliheads are now swilling bottles of American-made Naga hot sauce.

As you can probably tell, all this burns me up a bit. I discovered the Naga Jolokia on my first trip to the northeast at age 18, when I ordered a dish of egg curry and asked the cook to put some extra chilli in it. It was delicious, but within minutes my mouth and my scalp were on fire, and I experienced a dramatic bout of gustatory sweating and a temporary loss of hearing. I still remember that it was a jar of nougat candies that saved me. I have since acquired a taste for the chilli, though I use it with caution. I’ve learned the hard way not to touch my eyes or other tender parts after handling even uncut Naga Jolokias. 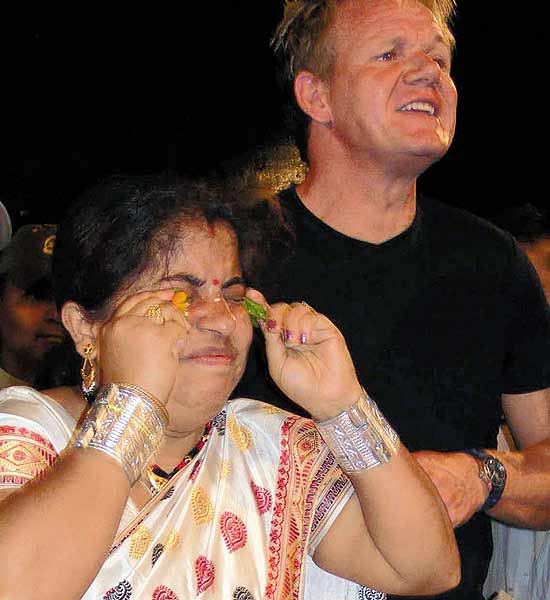 But there’s no point crying over spilled capsaicin. We’ve all moved on. India is still the world’s largest producer, consumer and exporter of chilli peppers, though in exports we’re beginning to feeling the heat from the Chinese—who else? In 2010, the Indian Defence Research Development Organisation announced trials of a Naga Jolokia-based chilli grenade intended for counter-insurgency operations.

Meanwhile the Chilli Pepper Institute’s latest genetic research has concluded that the Naga Jolokia is a “putatative naturally occurring interspecific hybrid” of the chinense and frutescens species. In England, another hothouse Frankenstein has raised a bastard chilli he calls the ‘Naga Viper,’ which apparently has some 300,000 Scovilles on its Indian progenitor.

Earlier this year, the West Indies enjoyed a piquant triumph when the Chilli Pepper Institute confirmed the Trinidad Moruga Scorpion as the new world champion at 1.2 million Scoville units. Though truly nationalist Indians might find comfort in the fact that 40 per cent of Trinidadians—including Prime Minister Kamla Persad-Bissessar—are of Indian origin.

Back in Assam, a sweet-faced 30-year-old housewife and mother named Anandita Dutta Tamuly took on celebrity chef Gordon Ramsay for a TV special, consuming 51 Naga Jolokia chillies in a couple of minutes. A weeping Ramsay left the field after just one, while Tamuly proceeded to rub another 25 in her eyes without shedding a tear. Hopefully she’ll soon earn a Guinness World Record of her own and make India proud.

How Cooking Made Humans Smart