Give Me The Tired, The Weary!

Officialdom thinks there's little to worry about. But for Citizen Jane, it's another story altogether. 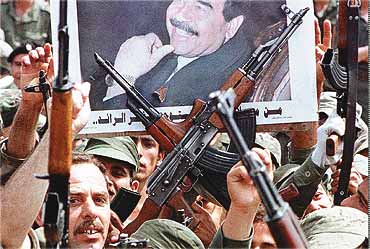 outlookindia.com
-0001-11-30T00:00:00+0553
The excited throng of protesters could have been anywhere in the world, among the millions who came out on February 15 to denounce plans for war against Iraq and its people. But this protest wasn't just anywhere. It was in the main thoroughfare of Baghdad, the hapless city that sits in the sights of the formidable US war machine. Armed with drums, trumpets, banners and their voices, tens of thousands of Iraqis called on US President George W. Bush to back down on his intent to deploy force against Iraq in an effort to disarm it of weapons of mass destruction (WMD).

The preceding day had enthused the Iraqis. The UN's chief weapons inspector Hans Blix had, on February 14, told the Security Council that Iraq had improved its cooperation, that there were no signs of WMDs and that he needed more time to continue searching for evidence to either prove US allegations or refute them.

Then came the protests—in Iraq and elsewhere. One Iraqi newspaper, Al-Iraq, described the protests as "the greatest refusal in history". Another newspaper, Babel, swam in the reddish ink of headlines and hazy photos—from London to Cairo—of the masses of people out to oppose war. It looked as though—and it was described as such—that the US and Britain could possibly be defeated by the sheer will of the people. "They tried," said one Iraqi protester, referring to the two countries, "to make the world buy their case but the world didn't accept it".

Such hope and enthusiasm dissipated quickly, as Bush made it clear that he was not about to be swayed by a bunch of protesters, no matter how numerous. "It's like deciding, well, I'm going to decide policy based upon a focus group," he said. His statement has prompted many to ask, can Iraq do anything to avoid war?

Iraq would argue that it has already consented to every concession the UN has demanded of it. For one, it has allowed U2 reconnaissance planes to fly over the country. The Iraqi government had been strongly opposed to these flights, believing the data collected through aerial surveys would be handed over to the Americans for intelligence purposes. And then Saddam Hussein acceded to the UN's long-standing demand of adopting an explicit legislation banning WMDs in Iraq.

But Bush's incessant war-mongering has kept the tension simmering. Iraqis are exasperated at Washington's declarations that Iraq's cooperation is simply a case of too little, too late. And they might soon find the US raise fresh contentious issues to go to war. Many here feel the al-Samoud missiles could provide Bush just that opportunity. With the inspectors finding these missiles violating the range limits imposed on Iraq, the US will want these destroyed. But deputy prime minister Tariq Aziz has already said that their destruction is "unacceptable". If Iraq refuses to relent on the al-Samoud issue, its intransigence could provide the US the pretext to declare war.

War is never desirable in any country. But Iraq—and its 26 million inhabitants—is particularly vulnerable, racked by previous wars and sanctions that have dragged on for 12 long years. A fresh military conflict is bound to devastate the country. Peace activists here say that a US war against Iraq would be like clobbering a dizzy fly with a massive hammer.

Iraqi ministers maintain they are ready for war. But experts in all areas—health, military, nutrition, economy—are extremely worried at the consequences of war. "The medical system is extremely fragile and if there a war, the health system will collapse," says Dr Michael Van Rooyen, an American emergency physician who has worked in Rwanda, Bosnia, Sudan. He believes the disaster of a war here could rival any of those he had witnessed earlier. "The 900 or so clinics in the country are severely depleted and are at half of their prior capacity.Ninety-two per cent of the hospitals we surveyed have major gaps in their ability to care for emergency trauma patients. The system is crumbling."

At a local children's hospital in Baghdad, Dr Mohammed Hassan, chief resident, is busy augmenting the institution's capacity to handle large-scale war injuries. The hospital has secured another emergency vehicle, stored extra drugs—and, above all, extra gallons of water. But such preparation won't bolster Hassan's capacity to provide succour to his patients: the hospital is overflowing; it even now lacks the drugs to save the children who die from the simplest of ailments like gastroenteritis.

When I visited the hospital last week, I came across two rooms bursting with young cancer patients. Sitting around them were their doting, pensive parents, certain their children were doomed to die. "Really, we don't know for how long it will continue," says Hassan, in between his rounds of the hospital. "It's a source of psychological stress and we don't know how we will be able to take it."

Other infrastructure systems—electricity, water and sewage—too are creaking. These are working at a fraction of their previous capacity, largely due the sanctions and the country's inability to import new machinery to refurbish the crumbling infrastructure. With American airstrikes expected to target power plants and water treatment plants, a deeper, more shattering crisis awaits Iraq.

What's even more perturbing is the prospect of millions of Iraqis languishing in hunger. Take the Husseins, for instance; they haven't eaten well for years, as they were accustomed to, say, a decade back. The two teenaged children barely recognise meat, eliminated as it has been from their diet completely—even on special occasions. It's just too expensive.

But even the Husseins are preparing for war. The family has placed three bags of flour outside on the porch, under a protective canopy. It won't be enough for them—and they know it. "In the 21st century, is it possible to live this poorly?" asks Faizah Hussein, the mother and sole bread-winner of the family, who makes an equivalent of about $3 a month. "It's been 13 years of continuous torture. Believe me, each day is like a year. I challenge anyone in the world to live one day like we live in Iraq."

The government—which provides rations on which some 60 per cent of the population depend—says it has already provided all its citizens with six months' worth of rations. But experts say these rations are in dismal quantity. "In some ways, the Iraqi population today is living like people in a refugee camp," says Prof Ron Waldman of the New York Centre for Economic and Social Rights, a group which recently conducted a study on Iraq's war preparedness.

Waldman found the Iraqi food distribution system highly vulnerable to war. "Imagine what will happen when there are no more roads, when bridges exist no more, when there is no longer access to the vehicles required for the distribution of food, when the lives of the 47,000 local distribution agents are disrupted," the Columbia University Public Health professor told Outlook. The minimal presence of relief agencies, he says, will impede intentions to quickly mount an aid operation to respond to the needs of millions of Iraqis.

This doesn't mean that Iraq isn't preparing to fight. Saddam recently ordered the elite Republic Guard to step up its training and disperse military units countrywide.This is aimed at surviving the expected aerial onslaught and to prepare for a ground war in and around Baghdad; to make Americans, as Saddam had threatened, commit suicide at Baghdad's walls. He's told his generals that a technologically-advanced aerial war will inflict damage they can't control but that the ground war is the ultimate determinant of the victor.

Officials maintain, with a touch of insouciance and in contrast to dire predictions from experts worldwide, that they don't need outside help to face a potential disaster. "We have plenty," said Mohammed Saleh, the trade minister, at a news conference. "Don't worry about us," he laughed. Words that demonstrated neither the nervousness nor the fatigue of the ordinary people.