Nothing bridges our urban-rural divide better than the preference for sons, even in this new century 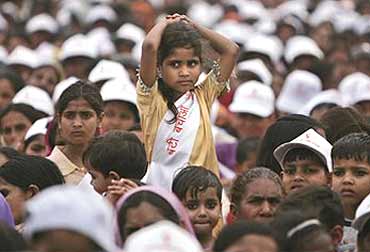 Disappearing Daughters— The Tragedy Of Female Foeticide
By Gita Aravamudam
Penguin Pages: 208; Rs: 250
Indian civilisation’s claim to abiding greatness and enduring values could stand severely tested with its systematic mass murder of unborn girl babies. An obsession with sons from the age of Atharva Veda ("Let a female child be born somewhere else. Here let a son be born") and lawgiver Manu’s treatise, legitimised through tradition and belief, has percolated down to 21st century India. Ironically, Pakistan, with its basis of an ‘Islamic’ reality, does not do much better—the sex ratio there is 938 girls for every 1,000 boys.

Delhi leads the way with a record 24,000 girls missing every year. Prosperous urban areas like Chandigarh, Sangli and Mehsana follow suit, playing role models to impoverished rural Bharat. Jeans-clad, pub-trotting, mangalsutra-wedded couples share one value with men who sport phetas (turbans) and women who demurely shield their face with the ghunghat. This shared value, an all-consuming preference for sons, spans the urban-rural divide and cuts across shameful disparities in consumption patterns and nutrition levels and translates into girl baby murder.

Until the ’70s, son preference led families, mothers included, to neglect their girl babies, and in some notorious districts of Tamil Nadu and Rajasthan, to actually facilitate their killing after birth. Figures of pre-Independence British India reveal low sex ratios of the girl child, leading the British to enact laws that were later repealed. However, the technology revolution in medical research offered pre-birth sex selection techniques—amniocentesis, ultrasound and scan machines—making doctors willing partners in crime. It also raised questions about the ethics and conduct of professional bodies, like the Indian Medical Association. Disappearing Daughters is a must-read for teachers, students, parents, political leaders and, especially, doctors. Lucidly written, it traces through absorbing case studies and relevant data the tragedy of Indians killing their girls en masse.

India, poised on what we are told is a growth boom, is being torn apart from within. The brutal political, social and economic exclusions and denials driven by caste continue to make The Scheduled Caste and Scheduled Tribes (Prevention of Atrocities) Act, 1989, toothless. The law against the giving and taking of dowry has not lessened the practice. In fact, there has been an increase in the scale of dowry that commodifies both the woman and the relationship. Is it any surprise then that the 1994 PNDT Act (Pre-Natal Diagnostic Techniques (Regulation and Prevention of Misuse) has failed to punish the powerful perpetrators of the crime?

A possible reason, rarely explored in public debate (much less by our omnipresent media), is the values of our opinion-makers and celebrities. We seem to be caught in a nowhere land. We wear the latest designer labels, spend oodles of money, travel on jet planes, sport Blackberry mobiles. Yet, modernity ends there. Domestic violence is a reality among our preening classes. It takes an Angelina Jolie to remind us that we have no comparable image of a celebrity adopting a really black or even a robustly brown child.

Political campaigns and election manifestoes rarely speak about social reform; weddings at which crores of rupees are spent do not attract the gaze of tax officers; dowry for an IAS officer runs into crores in Andhra Pradesh and Bihar, we are told. Meanwhile, what do our politicians have to say about the sweeping son preference that leads us to murder?

Missing Girls by Dr Manohar Agnani, an IAS officer, offers extensive data with suggestions for more effective implementation of the law. In order to implement the PNDT Act, we need active monitoring of birth ratios, fixing responsibility, getting the appropriate authorities to function effectively, to set up central and district advisory committees and get detailed medical audits of all ultrasound examinations carried out by registered clinics, sales-purchase records of ultrasound machines and to make these records public. Many state governments have shown a reluctance to do this, despite stringent remarks of the apex court (on a PIL filed by civil rights groups).

Flexible government policy coupled with grassroot efforts has had some impact, even in those districts of Tamil Nadu where girls were killed after birth. Sustained social campaigns, a few financial incentives, scholarships, self-help groups for women and other administrative measures outlined under the new legislation made a remarkable difference in a few areas. But it’s only a silver lining. The big change will come when we stop this conspiracy of silence.

'They Call Me !ncredible Ms Soni